The BookTrail on location! NewcastleNoir tour

There’s lots of criminally good books set in  Newcastle upon Tyne and this weekend I’ve been guiding literary tourists around the city. Real life BookTrails if you will.

We started at the city library and then made our way all the way to the Quayside. A bit of walking but downhill towards the River Tyne. This is a short version of the tour with an additional tour around Old Eldon Square..

So what books are set in Newcastle and where are the places you can see the city through the eyes of the authors and their characters? 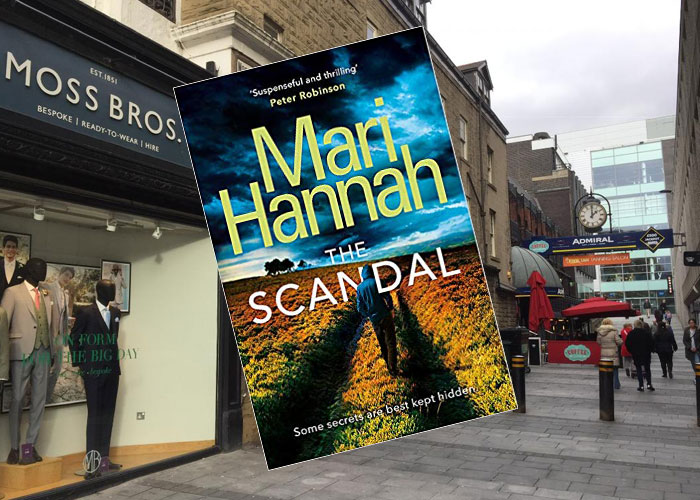 Book set in Newcastle The Scandal by Mari Hannah

This alleyway between the library is where The Scandal’s crime takes place. Chris Adams is found murdered in this very lane. Imagine this full of police, the SIO, police tape,blue lights and a sense of fear.

The main shopping street – Northumberland Street – of the city gets a mention in several novels but in Mari Hannah’s The Scandal:

It’s at night and in the novel Mari talks of the street being busy with ‘ the usual Saturday night crowd, with no outer clothing and  girls with stilettos which would be off before the night was out.”

There’s a funny scene when Vera heads into Fenwicks to shop for Holly, a member of her team. Secret Santa. But all she sees are women dressed in white beside what looks like dentist chairs. 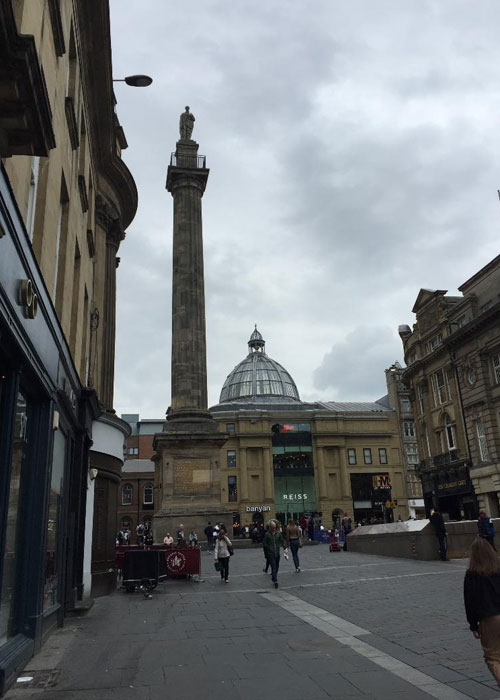 The centre of the city and from here you can see the famous Metro sign. In the novels, Vera heads out to Mardle and Partington from the metro station. Both fictional of course, but that’s the magic of books!

In the most recent episodes of Vera – which weren’t one of Ann’s books – Vera spends time in here interviewing witnesses and friends of the victim. 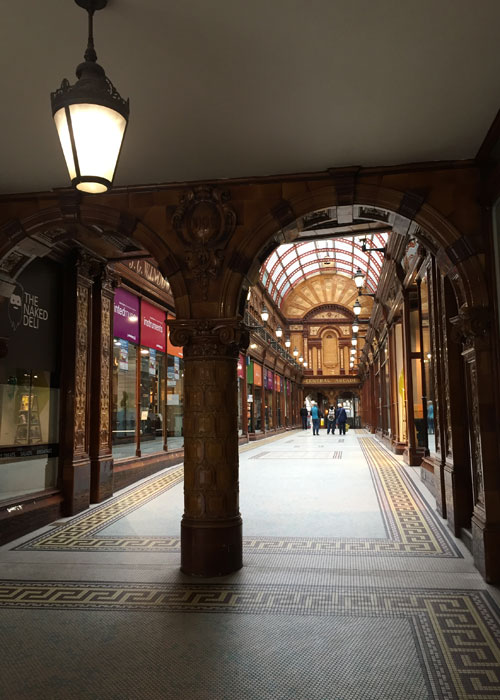 Rave is a novel all about the days when there were several record shops in the city’s shopping area and this is also where the so-called ‘ nancy Goths’ hang around in the book. This was a lot darker then, dark brown brick so would have looked more menacing. 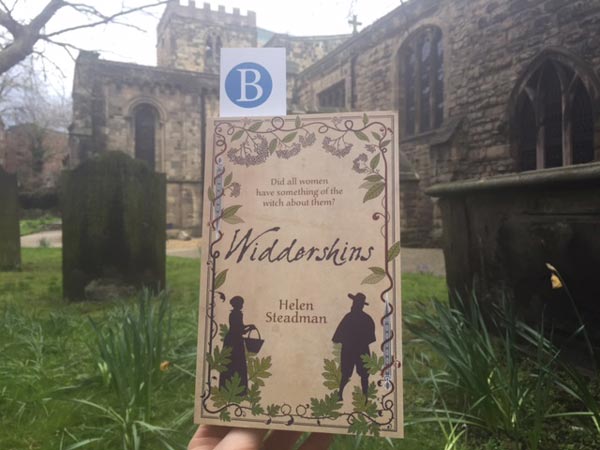 Not many people know about the Witch trials of Newcastle. The Pendle trials of 1626 are well known, but this site in the middle of the city centre is where history and fiction mix.

These trials were held in the 1650s – the strapline of the book asks – Did every woman have something of the witch about them?

In his earlier David Blake novels, he writes about the football industry and the local love of the sport. The Gallowgate Leisure operations in the novels are here and the football grounds are a regular landmark in these books 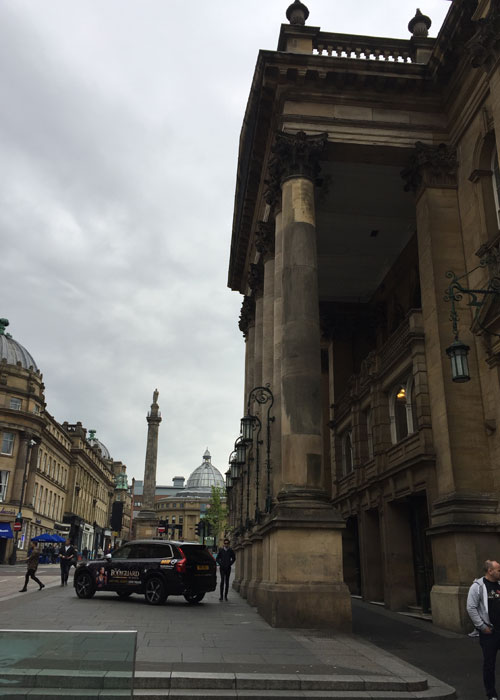 The police are about to go and eat in The Tyneside Cinema which is described as an art deco delight. Frankie wants to eat here as she loves the old film memorabilia as it’s the ‘only place that stayed open late that wasn’t a pub with a no neck bouncer on the door”

Mari Hannah visits this street in her very first novel.  Right the way down at the Living Room pub is where Kate and Ron Naylor have a drink and discuss the case. 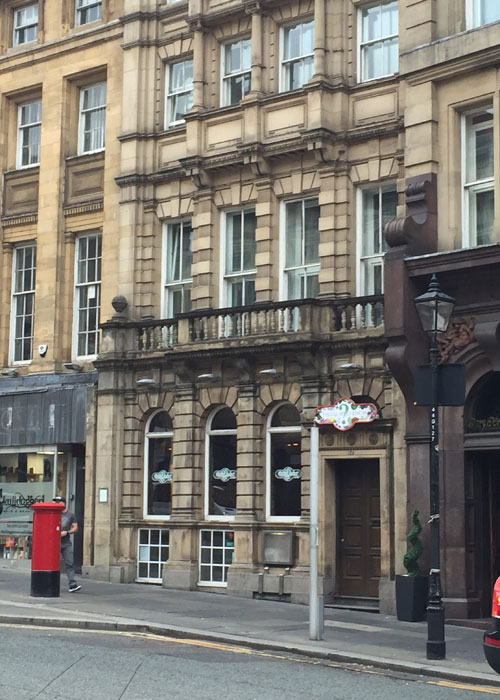 This is the street where in The Scandal by Mari Hannah, many of the city’s nightclubs and restaurants play a role in the novel. The city as you know is well known for its party lifestyle and this novel incorporates that side of the city. 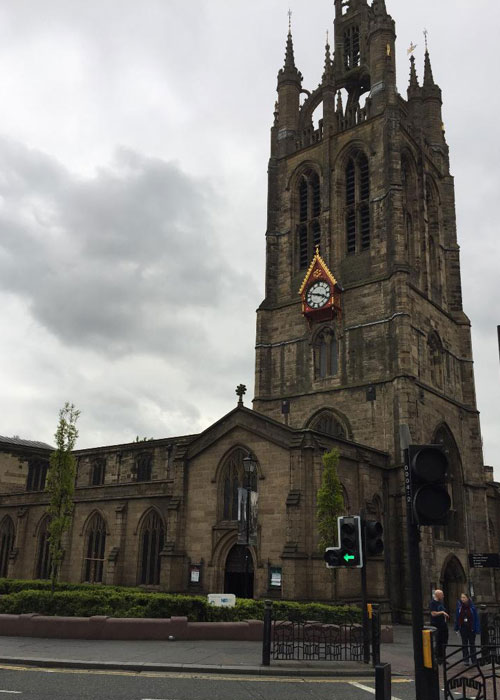 This is the cathedral at the start of the novel where Joe’s daughter is taking part in a concert….before all hell breaks loose. 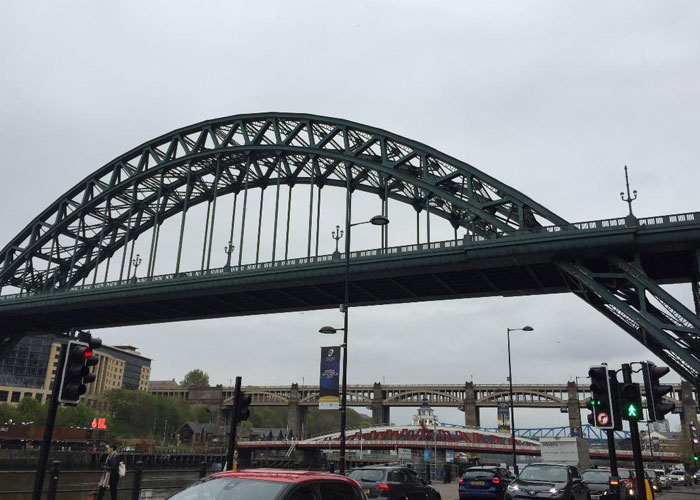 The bottom of Grey Street might feel like the set of Vera as an episode was largely filmed here. Vera parks the jeep here and walks into one of the shops where she ends up buying a mac. No such shop in real life sadly. However, you can buy her hats from a stall on the Quayside market when it’s on on Sundays. Apparently Brenda Blethyn herself has bought one from here.

The entire stretch of the Quayside has been in one or more episodes of the TV show and features in many of the novels during investigations..

The bridge at the centre of the story in L J Ross’ Seven Bridges. This is the bridge where there is a terrorist threat and there’s a suspected bomb attack. Bomb disposal teams are brought in and there is a keen sense of immediate danger and an investigation which seems to go in the most unexpected of directions.

This is where the prison van in the first novel in the Matthew Ryan series  drives across before the prisoner escapes. He’s just come from the courtyard along the quayside here. 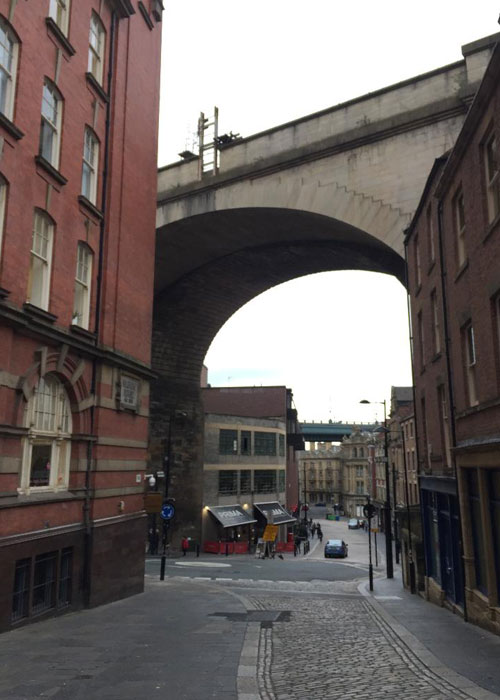 Many novels set in and around here. The most obvious is Silent Room where the book opens with a bang. A prison van waits to transport a prisoner…

Vera is often seen here as well. As are characters from other police procedurals set in the North East.

“Newcastle was full of people and friendly, they walked arm in arm between the art galleries , crossing the Tyne by the Blinking Eye Bridge”

You might think this is the furthest you can go on a Newcastle Crime fiction tour. Well, go further along the Quayside to Ouseburn and there you can do a tour underground, as seen in the L J Ross novel The Infirmary…

Hope you enjoyed this mini tour of Newcastle crime fiction. There’s many more where they came from!

Books set in the North East of England here (Vera drives that jeep around much of it!)