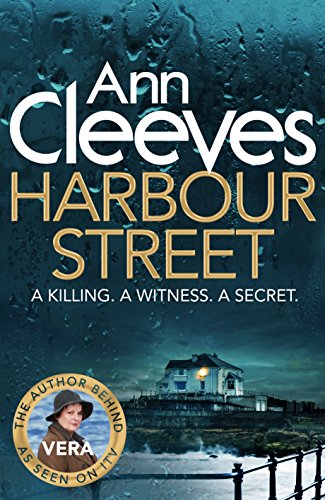 2000s: Ann Cleeves. Northumberland. A classic crime writer who lives and breathes the North East! Mardle and Partington may be fictional but they are inspired by real places!

In Newcastle, Detective Joe Ashworth and his daughter Jessie travel home on the busy Metro. The train is stopped unexpectedly, and Jessie sees that one woman doesn’t leave with the other passengers: Margaret Krukowski has been fatally stabbed. There aren’t any witnesses to the crime apparently so Vera has to head off to Mardle to discover what she can. But no one wants to talk. It seems everyone has a secret.

And when A second woman is murdered only a few days later, the crime takes on a whole new direction. And the inhabitants of Mardle are really closing in on themselves now.

Most of the places featured in the book are indeed fictional – Mardle, Partington and of course Harbour Street itself doesn’t exist – but the TV version of the novel was filmed in and around the village of Amble in Northumberland – which is utterly gorgeous and not at all like its fictional village – not in the slightest!

This is a novel where the setting IS one of the leading characters and even though the Mardle of the novel is fictional, it is no less threatening and gloomy –
Mardle wasn’t a place for tourists, even in the summer. There was nothing beyond the fisheries except the harbour, enclosed by the wall. The boats there were dark shadows, half-hidden by the drifting flakes.

Vera comes to Harbour Street to investigate the death of Margaret Krukowski and we follow her lumbering footsteps into one of the creepiest and suspicious sounding places where everyone has a secret and no one wants to talk.

This is a side of Vera’s stomping ground that she is not used to and has to painstakingly immerse herself into, penetrating the hardened Northern Shell over this place. But this desolate coastal town has an air of mystery and rawness to it that is at odds with the charismatic and wealthy victim. Intrigue is Vera’s sidekick here it would seem as well as charming Joe Ashworth.

“Newcastle was full of people and friendly, they walked arm in arm between the art galleries , crossing the tyne by the Blinking Eye Bridge.”

You should pay attention to women of a certain age wearing brown anoraks, tweed skirt, with a Geordie accent…..mind how you go, pet.

Let Vera and Ann be your guide to (fictional) Mardle, the TV version of which was filmed in Amble. The cover depicts a photo of The Cliff House at Amble.

As a fan of the North East and in defence of the lovely village of Amble, I have to say that Mardle in no way ressembles it. Thank goodness is all I can say. I mean there’s lots about Harbour Street that’s not attractive – hidden secrets, dark pasts, twisted thoughts and the fact that none of the residents here seem willing to talk.

Why would such well dressed and elegant lady find herself living in Mardle and more importantly who would want to kill her?

Even Vera thinks that she was ‘more Gosforth than Mardle from her appearance. (Gosforth was one of Newcastle’s posher suburbs.)

Harbour Street is just the kind of chewy puzzle Vera loves to sink her teeth into – she admits she feels a thrill when she is in Fenwicks of Newcastle shopping and the call comes in telling her a woman has been killed on the metro. But then guilt replaces it as she remembers that every someone has a relative or friend that will be devastated.

I was very happy to read about the Lit and Phil and seeing it get such a nice mention in the novel – where books are cherished and where one of the characters goes to read.

A murder mystery with a meaty puzzle to get your teeth stuck into. Vera at her very best. And a tour of Northumberland and Newcastle, not to mention a starting role for its special place for book lovers.

Harbour that thought when you read Harbour Street.