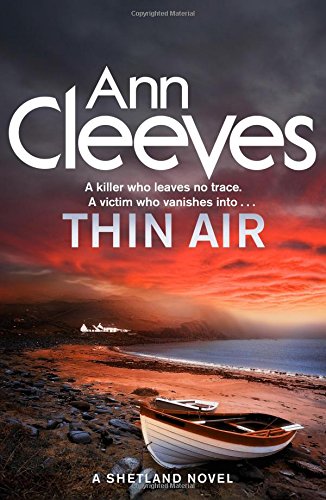 2000s: The Shetland novel located at the furthest point north on the map – Unst. Problems of modernity versus the old ways come to the fore

A group of old university friends leave  London and travel to Unst to celebrate the marriage of one of their friends to a Shetlander. However tragedy strikes when on the night of the wedding party one of their friends Eleanor disappears. when she apparently sends an email suicide note the next day, things get stranger still. But sadly her body is found soon after.

Detectives Jimmy Perez and Willow Reeves discover that before she went missing,  Eleanor claimed to have seen the ghost of a local child who drowned in the 1920s. Her friends say it was as if she was obsessed by it. It’s enough to rouse the suspicious of the two detectives.

Just what is the legend of this lost little girl and could it be something to kill for in order to protect?

Well what a part of the Shetland isles this turned out to be! We’d never been this far north before and just when you think you’ve seen most of what the Shetland Isles have to offer, that’s before you have seen the landscape of Unst.

It must have been nearly eleven o’clock but it was still light. Lowrie said in shetland this was called the ‘simmer dim; the summer dusk. So far north it never really got dark in June and now the shore was all grey and silver.

There is magic this far north and so the eerie though that there could be legends based around a young girl who  drowned many years ago and of other people from folktales, brings on a whole new eerie and ethereal tinge to the already barren shetland landscape.

Polly spent her working life analysng folk tales and she could understand how Shetlanders had come to create the trowes the little people with magical powers. It must be a result of the dramatic season and the strange light.

Strange ghosts, strange and eerie light, magical folk tales. No wonder the ‘soft southerners’ are freaked out. The way in which the london visitors arrive on the island and see the northern landscape through their southern city eyes is both amusing and probably very true –

He was hungry and wondering what they might do about lunch, and he was uncomfortable. These people had turned Sletts into a little piece of London with their ground coffee and their english voices, the fancy food on the cupboard shelves.

2) Belmont Unst on arrival
3) The famous bus shelter
Spin the map and see it change!