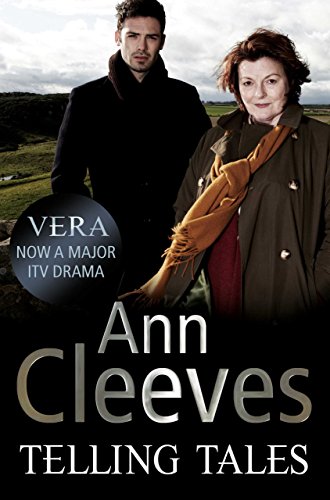 2000s: This time Vera heads to East Yorkshire and the bird watching landscape of Spurn Point. Vera however is watching and waiting for criminals…

Ten years ago Jeanie Long was charged with the murder of fifteen-year-old Abigail Mantel. But now it turns out that she may in fact have been innocent all along – and if that weren’t bad enough this means the killer is still at large.

Emma Bennett was Abigail’s friend who found her that day and it’s something she has never forgotten. Justice now for her best friend is what she wants.

Enter Vera and her straight talking investigation which takes the villagers of East Elvet back to a time they would rather forget. Just what is it they wish to remain buried?

Elvet may be fictional yet the area around Spurn Point and the region of East Yorkshire as a whole is clearly the setting for the third Vera novel. The point is geographically similar to Spurn but it’s not all the same. A fictional landscape somewhere East of Hull which is very reminiscent of the area however,

A small town with many secrets of its own.

This closed community seems reluctant to have its secrets looked into or for the old investigation to be reopened and reexamined. Vera has a lot on her plate but her presence, even if not on her usual home patch is necessary to reveal the secrets of this place

Hull and the Humber River

The raw and rocky storm wrecked coast at the mouth of the Humber River is an unique setting – the ships which go up and down the coast here in and out of the port make for a unique history of the area –
He joined ships at the mouth of the Huber and brought them safely into the docks at Hull, Goole or Immingham
The activity of pilots on the Humber illustrates a certain way of life which brings the area evoked to life. The life of the Coxswains is one we’d never read much about in literature –

Most of their life was spent waiting. The coxwains of the pilot launches waited for the tide and the crew of the sole permanently manned lifeboat

In real life, the pilots have moved out of their old office in Hull but to the author’s knowledge the office has not been sold for redevelopment, and the coxwains of the pilot launch don’t live there for real.

Spurn Point’s a very distinctive place. Ann Cleeves speaks of a place she knows well since her husband is a keen bird watcher as is she and they have spent much time near here. The open spaces, the fact that the land is slowly merging into the sea as it erodes away and the sense of impermanence of the area with the migrating birds and the changing weather and waters.

It was skinnier than it had been, a spit of land shaped like a dropping wasted phallus hanging into the mouth of the river from the north bank

Vera is back in her second literary outing and this time heading to East Yorkshire we see Vera venturing out to solve the murder of a young girl who was strangled 10 years previous. Together with a new killing, Vera has two problems to solve and the biggest one has to be the deceit and insular small village by the name of Elvet.

There’s something about small and insular villages or island communities which is fascinating in crime fiction and I loved the way Vera edged or rather barged her way in. She enters the novel earlier than in book one and so I felt I got to know her better. She’s quite a character and if she were real, I would love to meet her in real life, over a beer or a cup of tea.

The two murder threads and the strange police in a closed co,,unity setting are great features of this book and it’s not easy to discover who is guilty. What appears at times clear cut is not and the case is a lot more complicated than it seems.

Love Ann’s writing – so evocative of place and deep in characterisation so you can clearly picture everything you read. It was also lovely to find out more about Spurn Point and the birdlife there since this is a love close to the author’s heart.

A unique Vera adventure for sure.