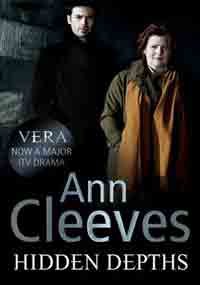 The discovery of a young man’s body in a bathtub  is something that starts a nightmare for Vera. This is a highly stylized murder and is very strange indeed. His mum Julie discovers him –

“Julie stared at him, submerged beneath the bath water, his hair rising like fronds of seaweed towards the surface. She couldn’t see his body because of the flowers.”

When a second body is discovered in a similar way in a rock pool at the coast,Vera is keen to find a link between the two murders. Not to mention to explore the group of friends who have discovered the second body. There’s something not quite right about them..

The region really is well drawn and evoked here and is particularly enhanced by Ann’s obvious love and care of the Northumberland coast line. Certainly the acerbic wit of her character Vera is a good accompaniment on any booktrail……as Vera might say  –

North Shields where Peter Calvert has a flat –

“His flat wasn’t far away, in North Shields, an attic overlooking Northumberland Park. Two elderly sister lived in the rest of the house.”

And where Tom Sharp has his ‘accident’ – aah the fish quay – (some of THE best fish and chips here – get some covered in salt and vinegar, sit beside the giant buoys on the pier and enjoy. Mind the sea gulls though – they’ll have their eye on you when eating)

The Fish Quay at North Shields where Tom Sharp had the accident? There’s that sheltered bit of the water where the boats tie up. That’s busy until the early hours. Bars, restaurants, people living in those smart and apartments they’ve put up.

Seaton Sluice (Seaton in the novel)

Where some of the characters live and much of the action centres around this village.

An ex-pit village on the coast.

“……the watch tower, which stood on the seaward side of the lighthouse. Once it had been a coastguard  lookout. Now birdwatchers used it to look for seabirds.”

And then they find something in the rock pools…

The cemetery and the high school get a  mention. There is a decent butcher’s in nearby Monkseaton and this is so close to Seaton Sluice and St Mary’s Light house that is a good place to soak up the coastal atmosphere and get  a sense of location by sitting on a park bench in view of the sea and sampling a local portion of fish and chips (helps get into the spirit of the locale hehe)

“I was working on Friday afternoon in the library in Morpeth.”

Finally don’t forget to visit Newcastle (Vera’s stomping ground  – often referred to as ‘the big city’. Peter works at the university there and Gary Wright works at the Sage –

“I’ve been doing quite a lot of work at the Sage music centre, Gateshead and now they’ve offered me a permanent job”.

We get a sort of guided tour thanks to Julie –

“On an impulse, she walked across the new Millennium footbridge from Gateshead to Newcastle, she‘d never done that before either. She stood in the centre and looked up at the arcs and towers of the other bridges, the Tyne, the High Level, the Redheugh, landmarks seen in a completely different light.”

You’ll see Newcastle and Northumberland in a different light after reading Hidden Depths as it shows some of the lovely costal areas of the region. See it all through Vera’s eyes…….
Aye Pet,  I see everything me. Don’t miss a thing.