A visit to Sri Lanka today with Harriet Steel who has written a series of novels set here, evoking the country and its people. Four books to transport you to the wonderful setting of Sri Lanka. The lush green mountains of HillCounty where the famous Ceylon tea grows.

So, why not pull up a chair, put that brew on and meet Harriet Steel… 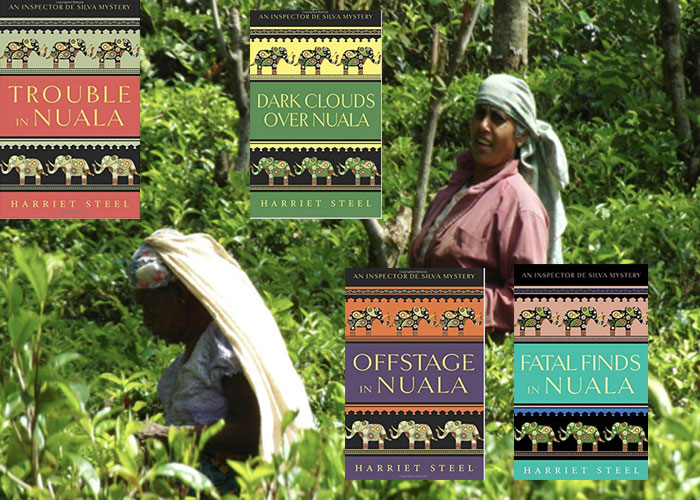 If you’d asked me three years ago what kind of author I was, I would have said “a historical novelist”. However. I’ve always enjoyed mystery stories, particularly ones from the Golden Age of detective fiction, or contemporary ones that are traditional in style. If I could go back in time, I’d love to have lunch with Hercule Poirot, tea with Miss Marple, and dinner at the Ritz with Lord Peter Wimsey!

The idea of writing in the genre myself crept up on me over the years, but the question of location, let alone a main protagonist, was always a stumbling block. Then in the winter of 2015, I travelled to Sri Lanka. I was captivated by the tremendous natural beauty of the country, often dubbed the Pearl of the Indian Ocean, or the Cinnamon Isle. The charm of its people, who seem to have recovered remarkably well from the tragic civil war in their recent past, was irresistible. The majority are Sinhalese, who see themselves as the original owners of the island, then come the Tamils who migrated over the centuries from South India. Add the legacy of the Portuguese and Dutch settlers and you have a very rich culture. It wasn’t long before I knew that I had found the perfect setting. Putting the story in the 1930s when it was still the British colony of Ceylon would, I felt, add an extra layer of interest. 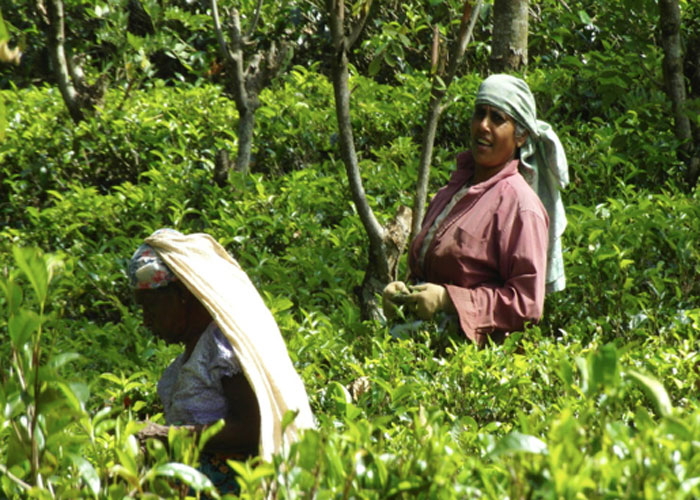 The books are set in the Hill Country where the famous Ceylon tea has been grown since the nineteenth century. It’s a beautiful, lush area where all sorts of fruits and vegetables are grown as well as tea. Its main town, Nuwara Eliya, the model for the fictional town of Nuala, is a little piece of England but interpreted with Sri Lankan flair.

When I wrote my historical novels, a great deal of research had to come from books, although I also did as much as I could “on the ground”. I think a strong sense of location is terribly important in bringing a story to life. I’m always pleased when readers praise this aspect of my work, as, gratifyingly, they often do. I was particularly delighted when a reader reviewing one of the books in my The Paris Chronicles series said that the city was portrayed so vividly that it felt like one of the characters. 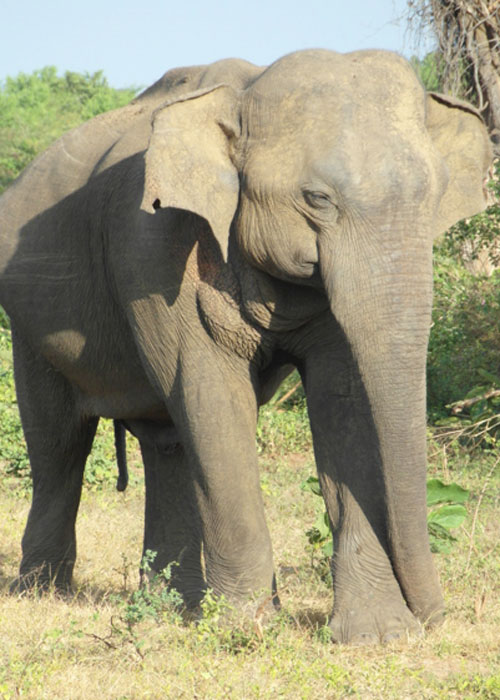 For the Inspector de Silva mysteries, the bulk of my research was at first hand, visiting as much of the area I planned to set the books in as possible; drinking in the atmosphere, and meeting the people. So many pictures stay in my mind: seeing wild elephants at Yala game park; browsing around colourful bazaars and temples; driving in rickshaws through thronged streets, and watching schoolchildren rehearsing in their school playgrounds for their enthusiastically celebrated National Day, the girls dressed in sparkling white, despite the dust. Selling washing machines and soap powders must be a good business to be in in Sri Lanka!

I’ve written four books in the series now, and I’m working on a fifth. I’d love to go back. Luckily, the books seem to be very popular with increasing sales and enthusiastic responses from readers, so maybe one day the royalties will pay for a trip! Until then, I shall carry on writing and remembering. 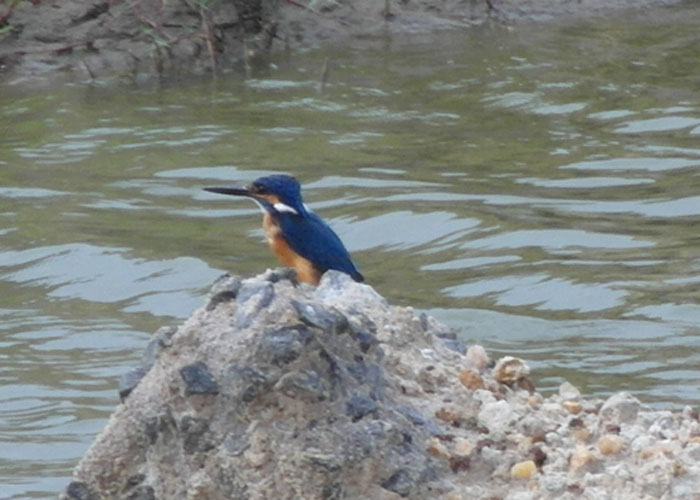 My advice to anyone visiting for the first time would be to follow the trail that my husband and I did, taking in Kandy, the capital of the Hill Country region, then going up to the hills. If you like to walk, I highly recommend Horton Plains where you can follow Inspector de Silva’s footsteps through the cloud forest to the precipice at World’s End. It’s worth booking a guide to take you up there early to beat the mist that, by mid-morning, obscures the jaw-dropping view. World’s End plays a crucial role in Dark Clouds Over Nuala and, in the cause of research, I was up and ready to go at five!

Sri Lanka has lots of exotic wildlife and you won’t just see it in the national parks. My favourites were the elephants and I simply had to have them on my covers. There’s stunning scenery everywhere too but, for me, the view over the jungle from the Ellerton Lodge near Kandy came top. 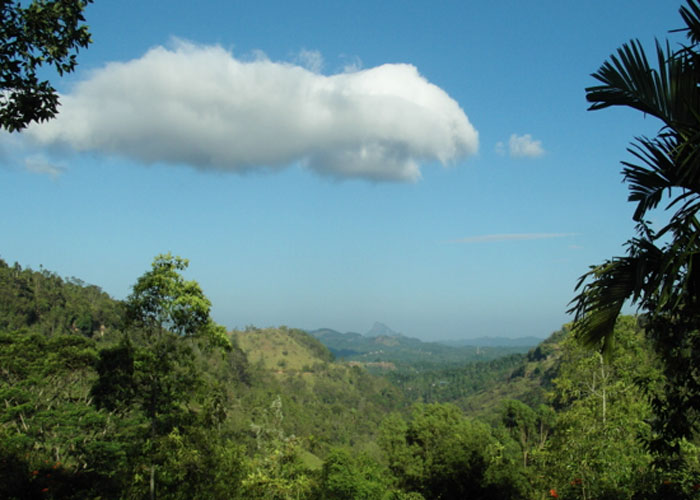 Kandy, to which Inspector de Silva pursues one of his suspects, is unmissable. In the Temple of the Tooth, the relic is kept in a sealed casket, but visitors and worshippers are allowed into the shrine in the late afternoon, at the time of prayers and offerings to the golden Buddha. The hordes of people and the din of the drums are dizzying and bound to get your adrenaline racing. Make sure you see everything and book ahead with one of the many private guided tours on offer; it’s worth the expense. After the drama of the temple, a stroll along the lakefront promenade or tea at the historic Queen’s Hotel are lovely ways to cool down.

If you’d rather not find your own way out to the Botanic Gardens at nearby Peradeniya, you’ll find it’s included in many tours of Kandy. The gardens are splendid, and I like to think of garden-loving Inspector de Silva going there for inspiration when he’s in town. The busy railway station where you catch the hill train is a Victorian gem. Try to have a peek in the signal box. It still houses the original equipment shipped out from England in the 1860s. 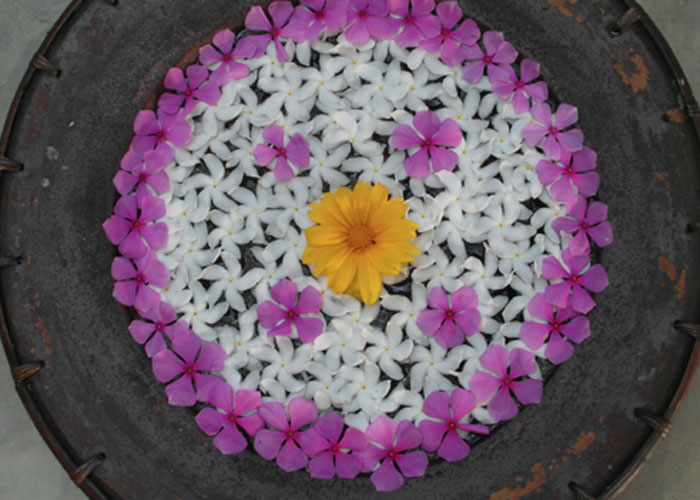 It would take a long time to do justice to all of Sri Lanka’s archaeological sites but Polonnaruwa, capital city in ancient times and not too far from Kandy, is high on most people’s list. It provided inspiration for the fourth book in the series, Fatal Finds in Nuala. Its combination of antiquity, romance and mystery is a gift to a novelist. Even if you’re wilting with the heat, don’t leave without seeing the stunning rock temple where the four statues of the Buddha, carved straight into the rock, are rightly reputed to be supreme examples of Buddhist carving. There’s something irresistibly serene and conducive to contemplation about them.

Inspector de Silva likes his food and it’s easy to eat well in Sri Lanka; the local dishes are wonderful and the produce very fresh. Some places tone down the fieriness for tourists, but if necessary, you can always add a dollop of yoghurt. Things have moved on since the 1930s. If you want a rest from spicy food, you’ll probably have better luck that de Silva does finding a decent Western meal. Cream teas are a delightful survival from the colonial era. The Stafford, where we stayed in Nuwara Eliya, served a delicious one. In the interests of research, of course, I had to force myself to try everything!

Thank you so much Harriet for a brilliantly detailed and evocative visit to your literary locations!