Nicola Cornick, author of The House of Shadows on the booktrail today with an interview and chat about the amazing National Trust which inspired the entire novel. Imagine going into a stunning National Trust property and finding yourself completely immersed in its history? Now imagine reading a novel written by someone who works there who knows every creak and crevice of the house and can evoke its history and essence in a way that no one can…. 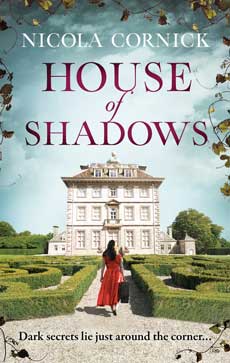 Ashdown House in Oxfordshire is the place with real and fictional secrets to share…. in The House of Shadows….there are stories of fact and fiction, past and present and lots more inbetween. This is a spellbinding novel and is a booktrail like no other – for you can go and see and sense the story for yourself in the very house it was based on  –

Your novel of the House of Shadows is based on a real place – Ashdown House in Oxfordshire. Can you tell us your connection to this house and why you set your book there?

I work as a volunteer guide and historian for the National Trust at Ashdown House and over the years I have researched the history of the house and the Craven family, who lived there for 350 years. I discovered a rags to riches tale of war and bloodshed, love and loss that completely inspired me and I knew I wanted to tell Ashdown’s story in fictional form. There is something extremely engaging about the house; it is definitely a character in its own right! It fascinates me.

Do you believe there is magic in an object that has passed down from one generation to the next? That an object can have the finger prints of history on it?

For me the magic power possessed by any historical object lies in the fact that it does have the fingerprints of history on it. I am in awe when I hold in my hand a Viking brooch or a miniature that belonged to my great-great grandmother. I imagine all it has seen and lived through. It becomes a living entity to me. 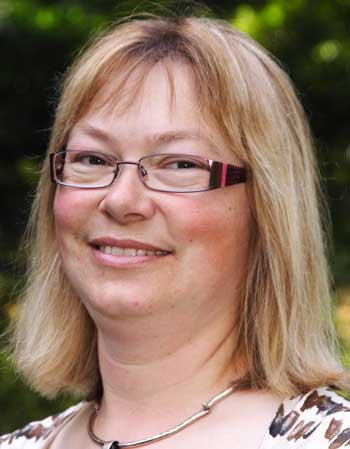 Can you explain the magic you find at Ashdown house and some of the locations we should visit from your book?

It’s interesting the number of people who do find a sense of enchantment at Ashdown Park. Firstly there is magic in the landscape of sweeping hills and ancient sites such as the White Horse of Uffington, Dragon Hill and the long barrow at Waylands Smithy. Then there are the legends told about them and the stories of long ago battles. I love the sense of a land that has been lived in and fought over for thousands of years. The church at Ashbury was said to have been a Saxon Minster enclosed within a stone circle. Legend has it that the sarsens at Ashdown are the remains of an army turned to stone by Merlin.  Most powerful is the house itself, built on the cardinal points of the compass in a place where two ley lines are said to cross and incorporating so much mystical Rosicrucian symbolism in its design. It feels surrounded by magic.

There are three very different time periods in your novel. Was it hard mixing and researching the three? Which proved to be the most difficult the most interesting?

I found it very difficult writing a mystery that was woven together through three different time periods. Plotting it was a challenge for me because I tend to write “into the blue” and see where a story takes me. That wasn’t possible when I had to make sure that the mystery developed logically, so it required lots of charts and timelines! Researching it was a joy, though. As a historian, it’s one of my favourite parts of the writing process. The 17th century thread was the most interesting for me because I was fascinated to delve deeper into the characters and lives of Elizabeth Stuart and William Craven. I found the contemporary strand the most difficult because I hadn’t written a contemporary story before and wanted it to be as compelling as the historical threads.

Women as a symbol of strength across the ages is a nice way to show how men have always tried to control their destinies.

I feel very strongly about this theme in history. I had written a lot about the Regency period and seen how women were viewed as chattels and how limited was their power. Then I went back to the 17th century and read about Elizabeth the Winter Queen. It struck me how almost all the contemporary accounts of her emphasised how beautiful and charming and charismatic she was, yet so few made reference to her political or cultural achievements. Not just that but some commentators even blamed her for her husband’s poor political judgement! I wanted to redress the balance and show how strong she had been and how much she had achieved. 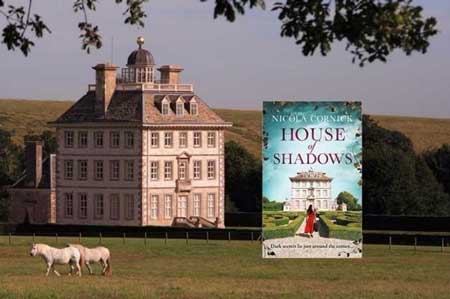 Would Holly, Lavinia and Elizabeth have been friends? What kind of cake and drink would they all share at a dinner party?

Great question! Hmm, They are all very different women but I think that once they got to know each other they would have respected the others’ strength of character and determination. Holly certainly admires both Lavinia and Elizabeth. I think Elizabeth would have been able to see past the fact that Lavinia was a courtesan to appreciate her sheer gutsiness. Lavinia would have been frankly envious of Elizabeth’s royal status and advantages! But what they all have in common is that they are gallant and I am sure they would recognise that in each other.

It would be quite some dinner party if they all got together! I think nothing but champagne would do for Lavinia and I imagine she would be happy to introduce Elizabeth to it! Cake-wise they could share one of Fran’s lovely organic bakes!

What do you think ‘cursed beauty’ means in the modern day?

It’s not a phrase that feels very modern to me. It has fairy tale associations. I see cursed beauty as anything that is so fascinating that it brings with it a sting in the tale, an obsession or a danger.

What are you planning to write next? Will you mix history and mystery in the same way and bring the past to life?

I’m currently revising my next book, which is called The Phantom Tree and will be out in the autumn. It is another history/mystery mix, which I had huge fun writing. Part of it is Tudor-set and part contemporary and it tells the story of Mary Seymour, the daughter of Katherine Parr and Thomas Seymour, and the history trail takes us to Wolf Hall in Savernake Forest and to Littlecote House near Hungerford. I hope you will join me on the trail!

For sure! Thanks Nicola. Look forward to the next trail!

House of Shadows by Nicola Cornick is out now published by Mira in ebook and Paperback (£7.99). Buy the book here: /book-trails/house-of-shadows