The Silk Weaver is a very personal and also very real story to the author, Liz Trenow. Set amidst London’s silk trade and those who worked in it, it tells the story of two people from opposite sides of the track, brought together by their love and passion for the new silk fashions. One woman changed the way silk designers encorporated patterns on to the material and effectively changed the way the industry worked. At a time where this was an industry and indeed a world ruled by men, this was no easy feat.

Booktrail the locations of The Silk Weaver

Liz Trenow has come to Booktrail Towers today and is currently sitting on a silk cushion, with her hair tied with silk ribbons, waiting to talk about this amazing book.. 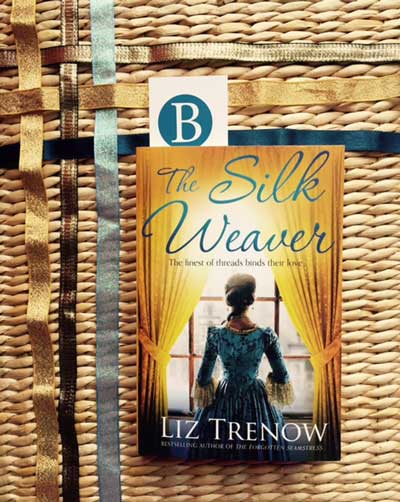 This is a very personal novel to you isn’t it?

Yes, very much so. The idea has been in my head for several years. When I was researching the history of my family’s silk business (which is still going today) the first address that I could discover was in Wilkes Street in Spitalfields. Just a few yards away is the house where the eminent silk designer Anna Maria Garthwaite lived and I was thrilled to realise that my ancestors would have known, and possibly worked with, the most celebrated textile designer of the eighteenth century, whose silks were sought after by the nobility in Britain and America. 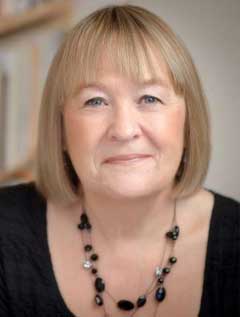 I spent nearly a year researching the history behind The Silk Weaver, going to museums, art galleries, libraries and Georgian houses, as well as reading very widely. Of course I also spent a lot of time in Spitalfields, at the beautiful Christ Church (where my ancestors were baptised, married and buried) and other venues and museums in the area.

Researching the history of the Huguenots was especially interesting and at times sad: to escape religious persecution they made perilous journeys and terrifying sea-crossings in much the same way as migrants fleeing war and persecution must do today.

What can we see in the Victoria & Albert Museum regarding the silks?

The V&A has around 900 examples of her designs, both woven as silk and as paintings, but only a few of them are on display at any one time, although I am sure that if you asked they would allow you to see more. There is also a fabulously illustrated book called Silk Designs of the Eighteen Century by the former curator of textiles at the museum, Natalie Rothstein, which I would recommend for anyone wanting to find out more. 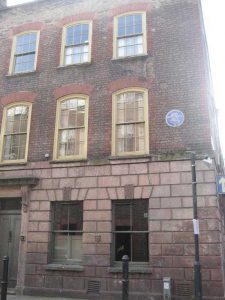 Anna Maria Garthwaite is quite a character. Can you tell us more about her?

She was one of the most celebrated textile designers of the early eighteenth century, noted for her naturalistic, botanically accurate designs and credited in the Universal Dictionary of Trade and Commerce of 1751 as one who ‘introduced the Principles of Painting into the loom’.

I really love her designs because they are so naturalistic and disarmingly simple, but tantalisingly little is known about her personal life and this is what intrigued me. How did she learn the highly technical and complex skills of designing for silk? And how did a single woman by then in her middle years manage to develop and conduct such a successful business on her own account in what was a largely male-dominated industry? It is these mysteries that sparked the idea for the novel.

There is a strong French influence in the book. Did the research for this take you to some unusual places and unusual finds?

Fortunately there is a thriving Huguenot Society in London and their library is stuffed full of wonderful documents, letters and personal accounts from which I learned about the terrible persecution of Protestants at the hands of the Catholic king of France: how they were banned from worshipping or burying their dead in churchyards, how soldiers were billeted with families to enforce the law, and how many decided to use all their savings to make the perilous journeys across the Channel in small boats to reach safety in England.  It is horrifying that such dreadful events are replayed every day, even now. 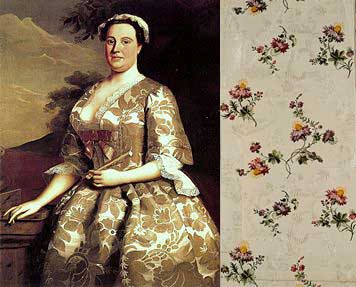 Anna-Maria-Garthwaite and some of her silk (c) Wikipedia

Do you own any real silk yourself?

Being brought up living next door to the silk mill meant I had was able to get hold of small pieces of ‘substandard’ fabrics which were not saleable. I used to sew myself silk dresses, jackets and furnishings. It’s not the easiest fabric to work with, though!

Why is silk still considered as such a luxury item?

Because it is so labour intensive to produce – from the reeling of the fine threads from the cocoons, to the spinning and dyeing, the designing, weaving and final finishing.  At my family’s mill every piece is carefully designed and woven for each customer. The finished product is so luminous, so beautiful, so gorgeously coloured, that it’s no wonder it is valued so highly as a symbol of power and wealth.

Which item made from silk would you like to own?

Thank you so much Liz for answering my questions today. I am now going to take these ribbons out of my hair if you don’t mind and how about we head to Spitalfields for some silk surveillance? And a cup of tea and some cake of course….