The Mari Map of Northumberland Noir

Northumberland Noir gets a new crime duo today as Stone and Oliver  are born. They’re the stars of the new series from the pen of Mari Hannah who’s already written greats such as Kate Daniels and Ryan and O’Neil. Both great series if you haven’t read them before.  Over now to their creator, Mari Hannah, for some insight, Northern chat and pease pudding sandwiches (a Northern snack if you haven’t tried it, you are missing out!) 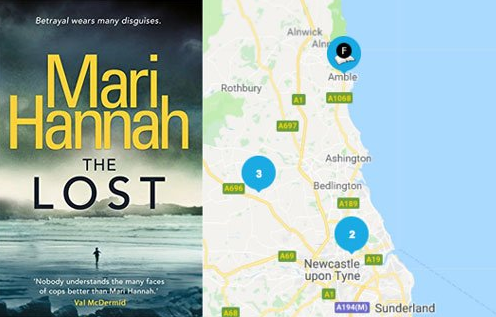 So, a new crime series for you. Why did you want to introduce this series and what makes it different to the others you’ve written?

I recently changed publisher. I have a new deal with Orion – the home of some of my favourite crime writers – and they were keen for me to write something brand new. That was fine with me. I love the challenge of creating a new investigative team to share with my readers. 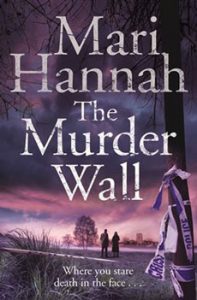 My characters are very different personalities and the books reflect this. DCI Kate Daniels for example is a lesbian cop who hides her sexuality. She’s a senior detective in a Murder Investigation Team when we meet her in The Murder Wall, her first case as SIO. The award-winning series has touched the hearts of many. It won me a Northern Writers Award, the Polari Prize and the Dagger in the Library 2017. The series is in development for TV with Sprout Pictures, a company owned by Gina Carter and Stephen Fry. 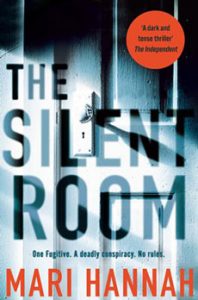 Matthew Ryan was a Special Branch DS locked out of an official investigation in The Silent Room. Consequently, he went dark and was forced to investigate under the radar. Because of this, I was able to play with his character a little more and was not tied by the constraints of police regulations in this one. It was fun to write Ryan as a maverick cop being chased down by his nemesis, Detective Superintendent Eloise O’Neil, a Professional Standards Officer. This book is a conspiracy thriller on a much larger canvas and sees the two join forces and travel to Norway to solve the investigation. There’s a bit of Scandi Noir in there.

Stone and Oliver begin their series in general CID. The LOST begins abroad, then switches to the UK where a child has inexplicably gone missing when his mother is on holiday in Majorca and he’s in the care of his step-father. This book is a psychological thriller, very different from anything I’ve written before. What I love about it is the fact that Stone and Oliver haven’t worked together long and are just getting to know one another, feeling each other out. I really like working with a blank canvas. 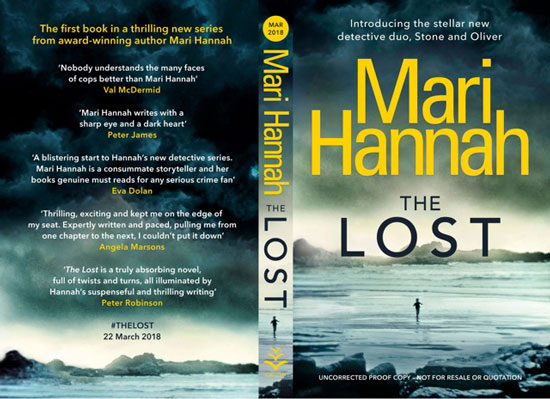 Can you tell us more about your new detective duo?

Detective Inspector David Stone has just arrived in the area from the south. This charismatic loner has fifteen years under his belt in the Metropolitan Police but has taken a demotion and come home to Northumberland where his roots are. His name doesn’t fit his character. He’s no hard man, but a thoughtful, intelligent and compassionate officer doing a job that chips away at his spirit on a daily basis. One incident in particular sits on his shoulder like a heavy weight, a closely guarded secret he’s unwilling to share.

His second-in-command is local officer, DS Frankie Oliver. This third-generation enigmatic cop followed her father and grandfather (both Frank) into the job. There has been a Frank Oliver in Northumbria Police since 1966. Having worked in many departments, Frankie has found her niche as a DS in the CID where she’s been for the past two years. She’s ambitious, confident in her abilities, the kind of officer you would not cross, but with a hidden vulnerability. Like Stone, she has a past she’s keeping under wraps.

There is a reason Stone and Oliver deny themselves openness. Any sign of weakness is frowned upon within the force. Consequently, their individual experiences act as an ever-present threat that could come back to haunt them at a moment’s notice. These two central characters are set to become a tight and loyal unit.

I don’t want to give too much away before my readers have had a chance to read THE LOST, but the theme of the book is betrayal and how this can and does impact on the lives of those it touches. The idea for the book came to me in a flash. It was one of those ‘what if’ moments, a plotline I played with for a couple of years before I did anything about it. It’s about a married couple – both entrepreneurs – and how their perfect life crumbles when their son disappears.

Location is very important to you isn’t it?

Yes, a sense of place is crucial. It’s what makes a book work for a reader whether they know an area or not. My name has become synonymous with the north east region. Like the others, this new series is set in and around Newcastle and the dramatic wilderness of Northumberland where I live. It’s a diverse patch that includes a party city that has undergone widespread regeneration in recent years, the windswept Hadrian’s Wall, stunning coastline, villages and market towns, a landscape unchanged for centuries that is as much a character as the locals. Stone and Oliver work for Northumbria Police at Northern Area Command, Middle Engine Lane, Wallsend: aka Middle Earth.

You recently chaired your first event at Forum Books in the new shop. How was that? 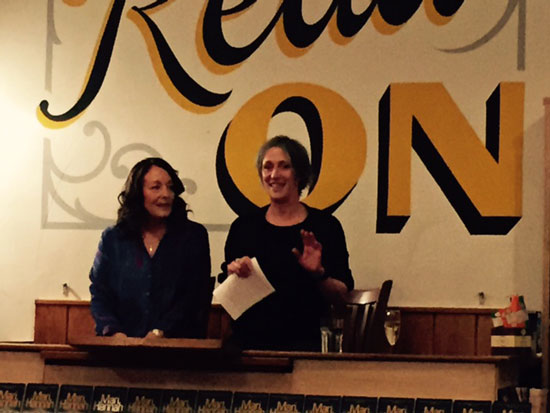 Mari Hannah with Helen from Forum Books as The Lost launches at Forum!

It was great. I was very proud to take part in Forum’s inaugural event. The old bookshop opened at around the same time as I was first published and my relationship with this wonderful independent bookshop and the amazing staff who hand-sell my books has been crucial to my success locally.

On this occasion, I interviewed Eva Dolan, a writer I admire greatly. Her new book This Is How It Ends is a great read and one I highly recommend. In blizzard conditions, the Corbridge community came out to see her and also to support Helen Stanton who owns the bookshop, an amazing space we’ve all being dying to see.

Which crime dramas have you seen recently on TV that you would recommend?

I read more than I watch TV to be honest, but season one of the French mini-series La Mante was brilliant, with the creepiest of antagonists, the incarcerated serial killer Jeanne Deber (aka The Mantis) played by Carole Bouquet. 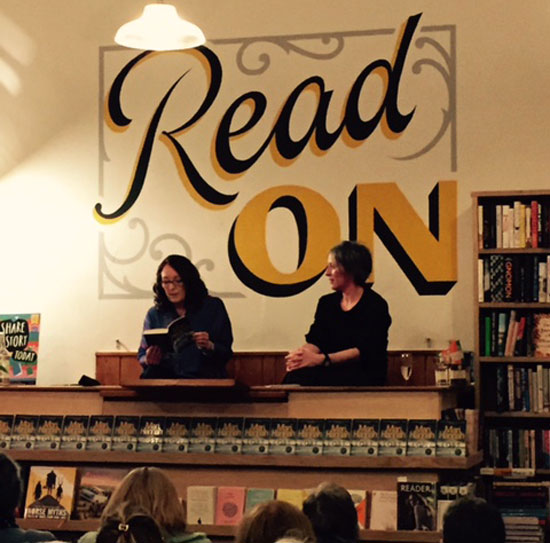 Who would play Oliver and Stone?

That’s a difficult one and something I’ve not really given any thought to yet, but I’d like to think that Stone and Oliver might find a producer one day and end up on the screen. It’s a leap of faith when you sign away the rights to your characters but, handled well, TV can really bring them to life.

Evoking the five senses into a scene?

Any writer has to take account of this. That’s why I visit locations at different times of the day and night. You can’t pick up smell or sound by looking at a picture on Google. It’s not the same as being there physically. Some of my best plot twists have come from visiting scenes, hearing and experiencing the vibrancy of a place. You need to feel the landscape and listen to what it tells you, including where your main characters live and work. When it comes to crime scenes, a personal visit is a must in order to capture the drama.

I love the seaside town of Amble! Frankie Oliver lives in an apartment at Coble Quay overlooking the marina. I rented a place there for a week to get the feel of it and, of course to get the geography right. That’s the upside of being an author. You cannot work in a vacuum. You have to get out there, otherwise you’re writing blind.

Was it tricky writing more about children and the emotional side of a crime?

No. As an ex-probation officer, I spent many years witnessing the emotional fallout from crime. Every series I’ve written has been character driven. Man, woman or child, you have to get inside the head of your characters to explore what they’re going through. It’s the emotional interaction between them that excites me. In the writing process, I’ve inhabited the personalities of a distraught mother, a forlorn teenager, a football coach, a business partner, more than one entrepreneur, a serial philanderer, a sinister figure with murder in mind. The list goes on . .

Thank you so much Mari for a very insightful look into your new series!

WHAT a book launch and fantastic new series this is! For the chance to win a SIGNED copy, head to our Twitter page and RT the pinned one about Mari!