Honoured is not the word. When Ms Slaughter answers your questions and pops into BookTrail Towers, you put down the red carpet (blood red of course) and feed her cake.

Her new novel Pieces of You is out now and we put the spotlight on her, sat her in a chair which is not unlike the one you see on Mastermind and fired out the questions: 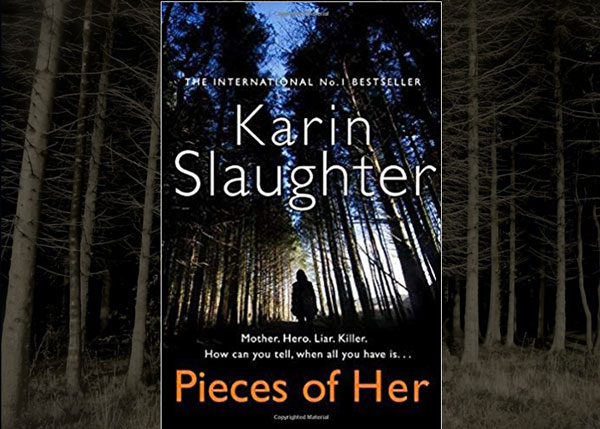 Half of Pieces of Her takes place in the 80’s. What influences did you revisit to get yourself into the mindset of the geopolitical and socioeconomic climate of this time?

A lot of it is just stuff I remember because I was a teenager then, so the music and the clothes are familiar.  The social and political events I had to research because of course I was too young to pay attention.  It was a really weird time in history.  Lots of progress was happening but a lot of people were left out of that progress.  There was a lot of deregulation that we’ve paid for dearly. In the book, I talk about how psychiatric hospitals were shuttered—federal funding was cut off for them—so people who really should have been institutionalized were kicked out and expected to live peacefully in group homes. And the anticipation with group homes is that you get better and can move out on your own. Some people aren’t capable of that. So you had these people denied mental health services that they desperately needed, and there’s a direct line between cutting off mental health funding and the surge in rates of homelessness.  There’s a reason that people with serious mental health issues comprise around 50% of our prison population.  We spend millions incarcerating them rather than hundreds of thousands treating their illnesses. 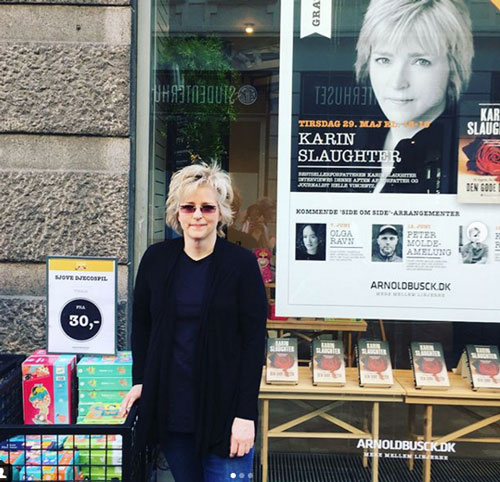 Andy stops at a local library in Pieces of Her to research—it’s a safe haven, a reprieve in the midst of the drama. Do you often visit libraries when researching your novels?

It depends on the novel. For Cop Town I was at the Auburn University Research Library a lot. Most of my interactions with libraries are when I’m doing fundraisers or doing events because I’m really lucky I’m in publishing, I get lots of free books. I don’t really like to leave the house unless I have to. So the reason I wrote about the library in Pieces of Her is because Carrollton, Georgia is a town I know pretty well. And the library is really kind of the center of the community there. And that’s true everywhere. If you think about women like Nancy Pearl and people who have really stood up for things that are important like having access to reading and literature and being able to look stuff up online and have a sense of privacy. Because the fact is that a lot of people, especially in rural areas, and Carrollton isn’t rural but it’s a small town, they don’t have access to the internet anywhere outside of the library or at school. So there has to be a certain set of assumptions when you go to the library about your safety and your ability to do what people usually do at home there. Read the books you want to read. Look up stuff online. I’m not talking about gay porn but look up stuff online, and have a certain freedom of life liberty and the pursuit of happiness at your library. 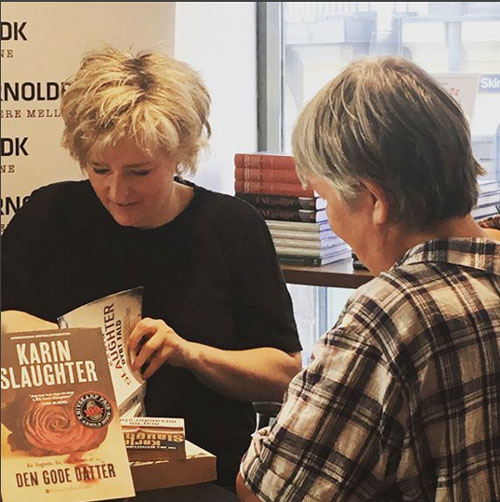 How is writing a standalone different for you than writing the Will Trent series? Does your process differ at all?

It’s not a different process because every book starts with that first chapter and I just try to think of something awful that’s going to open the book. Each type of novel has its easy parts and its hard parts. The hard part for a standalone is that they’re all new characters and I’m still getting to know them. When I’m finished writing I have to go back and check for character. I’ll just read the Andy parts, or the Laura parts, and I’ll make sure the character you read in the first chapter makes sense as the character I leave you with. What I wanted to concentrate on with Andy was her growing up.  As the book evolves she has more self-confidence, more understanding of how the world works.  That kind of knowledge will, I hope, lead her into some kind of transformation.  But she’s not suddenly going to have a Supergirl cape. And the same with Laura. I wanted to make sure she made sense all the way through. Now, when I’m writing a Will Trent book I know that character work is pretty much done. But the problem is I need to find new things to say about Will and Sara for the people who have read every Will Trent book, and then I have to find a way to tell people who have never read a Will Trent book about these characters without boring the pants off the first set of readers.  It’s quite a tightrope.

Your books always start with an opening chapter that ends with a bang. How much of that is because you think it works structurally for readers, and how much is because it’s a creative trigger point for you?

It’s all for me. I never think about my readers when I’m writing. I love it when they’re there when I finish writing—that’s fantastic—and I like hearing from them and reading their questions, but I never think about them when I’m writing. What that first chapter is, is something to make me interested. It’s sort of like, there are two kinds of cat toys: the ones that are battery operated and move, and the ones that are static. I’ve always been drawn to the sparkly, movey things. That pulls me into the book and makes me interested in the story. 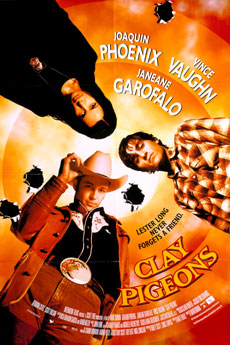 What are your favorite books and movies? Are you usually drawn to thrillers, or do you stay away from them when you’re writing?

I read all kinds of stuff. I can’t read when I’m writing because I need to focus on my story and I don’t want to read something else, in case suddenly I start writing like someone else. It’s very important to me that my writing has a voice and I don’t want anything to clutter that up. I do read magazines and blogs and look at cat pictures; I just can’t read books. When I’m free to read, I love historical fiction. I’ve been reading a lot about the Tudors lately. I’ve also been reading about reconstruction; I read this really fascinating book called Masterless Men about the South during the time of the Civil War. People who go on my Goodreads will probably think “what the hell?” But they will find some of my favorite crime authors, too—Lisa Gardner, Lisa Unger, Sara Blaedel, Lee Child, the usual suspects. I don’t like slasher movies because they scare me. The stupider they are, the more terrified I’ll be.

You know, the person’s standing and talking to someone and then someone else goes up behind them?  That freaks me out. But I love Silence of the Lambs and subtle scary movies. I don’t like anything with demons and Satan because I was raised to be terrified of those things, and no matter what I do I’m always worried about needing an exorcism. It’s in my blood. My favorite movie of all time is called Clay Pigeons. It’s very dark and funny and fantastic.

With that, I go to hire Clay Pigeons and The Tudors on DVD happy in the knowledge that Ms Slaughter is fearful and interested in more than I realised. I would suggest watching a scary movie with her but I fear we would both be hiding behind the sofa! . I will just keep reading Karin’s books instead

Thank you SO much for chatting today Karin!

BookTrail Boarding Pass: Pieces of Her