The BookTrail of The Emperor’s Shoes continues today…and it’s off to the Leather Tannery…..

This is a novel which really delves into the shoe trade in China, inside the factories, the tanneries, the back streets and more. Last night Spencer left you at the hotel. Now it’s daylight once again and the journey into the story of The Emperor’s Shoes starts again….

“No ventilation here aside from the open shipping door and a few standing fans. Dozens of raw hides hanging from meat hooks move like tattered sails along the ceiling, these giant torn flags of skin, loose and heavy.” 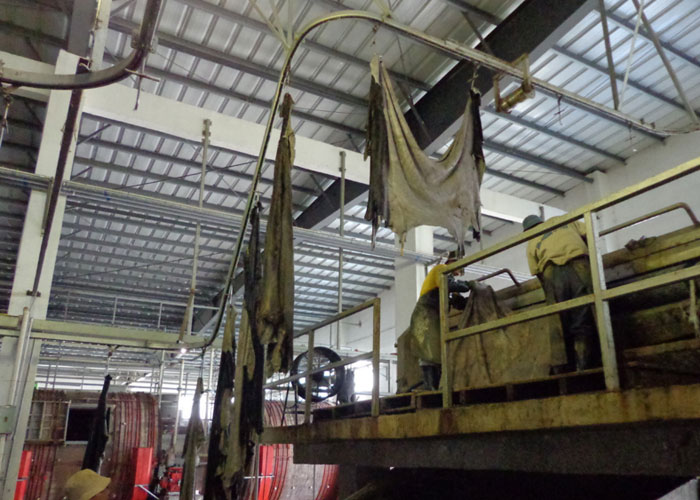 This is where Alex and Ivy go to deliver a bribe. The tannery sits on 300 acres of filled-in swamp. A shoe tannery is one of the worst places in the world. The smell is crippling.  These tanneries used be closer to the cities but they kept getting moved further and further out. This one is almost in the South China Sea. Taishan is the name of the town. The people from Taishan were heavily involved in America’s brutal exploitation of Chinese laborers building the Central Pacific Railroad transcontinental railroad. The tanneries indulge in the same sort of exploitation really. It’s ghastly work. From the point of the manufacturing, when it comes to making shoes, the less people know about the tanneries the better. It takes a lot of nasty chemicals to turn rawhide into leather. Oddly, the village around the tannery is beautiful. When I was there, all the squid fishermen were outside sitting on low plastic stools gambling and smoking in the heat, shirts rolled up to their armpits. Their boats were all docked because it was breeding season (for the squid). The women were sewing and mending fishing nets while kids fished off the bridges. 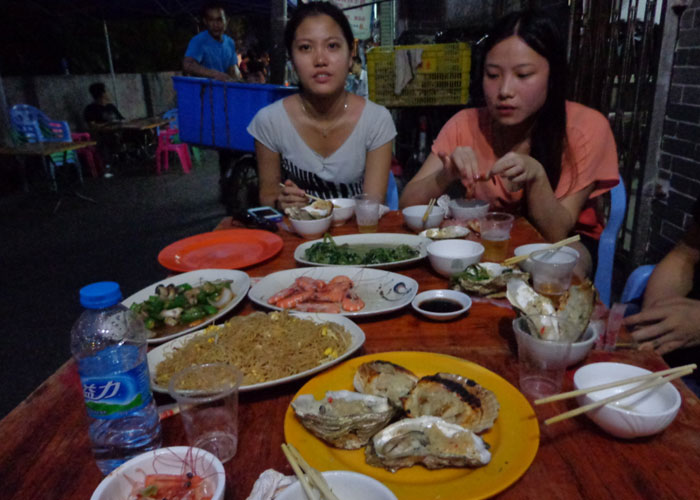 “Very sad, these accidents,” he continued, shaking his head.  “So I go there right now but later I go to lunch at my favorite seafood restaurant in Long Yuan Xi. Pick my own fish out of tank. This is my advice,” he said, leaning forward. “You look at the eyes. Should be clear. Foggy eyes, no good. Old fish. Sick fish. Something wrong. Need bright clear eyes.”

In this scene, Gang, the city mayor, is threatening Alex, whom he suspects is lying about his involvement in a labor movement. I actually went to this seafood place in Guangzhou that Gang is referring to and it’s fantastic. You should go here too. It’s a series of seafood stalls that you wouldn’t think you should eat at but it’s the best food ever. It’s right behind Chen Clan Academy. They cook oysters and squid on standing grills. There’s plenty of things to do around here in Guangzhou. There’s some touristy places. But go eat crispy fish skin. It’s an authentic local delicacy. It’s called Chen TianJi. You must eat it. See the guide here for how to find the alley that has it. It’s incredible. Also try the teashops in the Changshoulu area. Eat real wonton noodles and fish balls. This is all street food and it’s better than food you’ve had at five-star restaurants. Guaranteed. 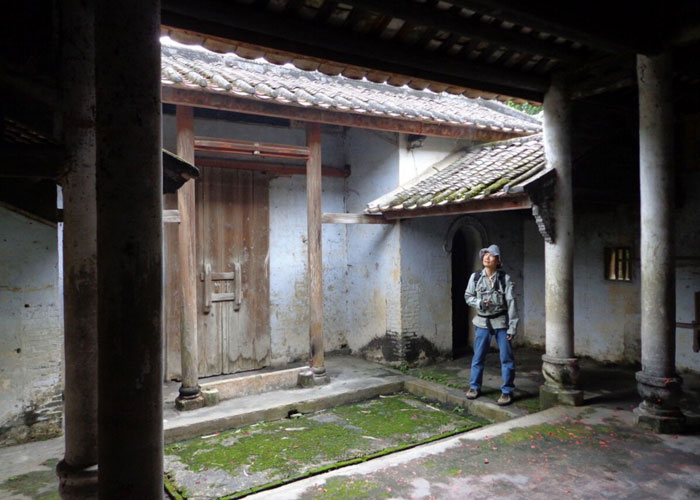 “The whitewash plaster of her house had mostly peeled away from the gable wall and you could see every generation of infill—mud brick, tamped earth, daub, and, most recently, cement, as if you were using tree rings to see into the past.”

The county is called Qingyuan, which means the waters are clear and far.  The town is Yingde. This is where Ivy’s family is from and where she takes Alex in a crucial scene. It’s Ivy’s ancestral home that she’s responsible for preserving and honoring. She’s found a clever way to evade the government’s land-grab attempts on her home. 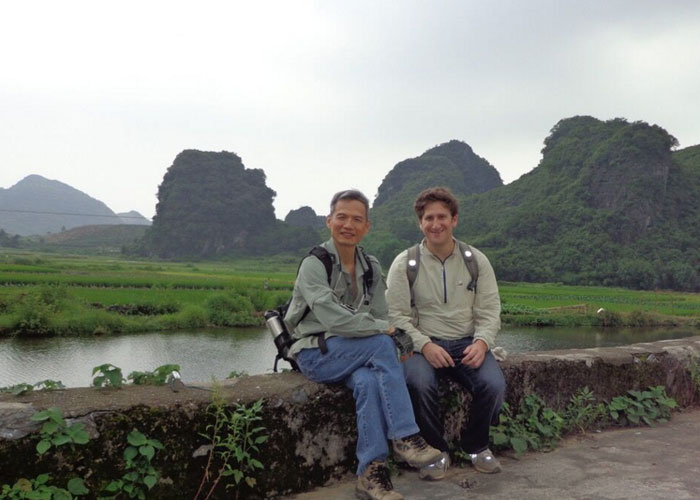 Yongxi took me to Yingde on a bike ride, winding our way through old Hakka villages and farmland.  In one village, these kids were tearing down some ancient stone archway to make room for a newly paved basketball court. It was tragic. So go see the countryside before it’s all gone. There’s plenty of books and essays to read about what’s happening to these old villages and the youth who aren’t coming back. It’s pretty heartbreaking. In my book, Ivy and Alex want to break away from certain old traditions but preserve others. For Chinese and Jewish cultures, there’s always some deep abiding tension between what to take and what to leave.

But it really is beautiful country. Yongxi and I rode past the women carrying bamboo and fruits down from the Karst mountains. We were in the valley with the rice farmers and water buffalos. For lunch we ate an ear of corn and an apple. One of the best days of my life. 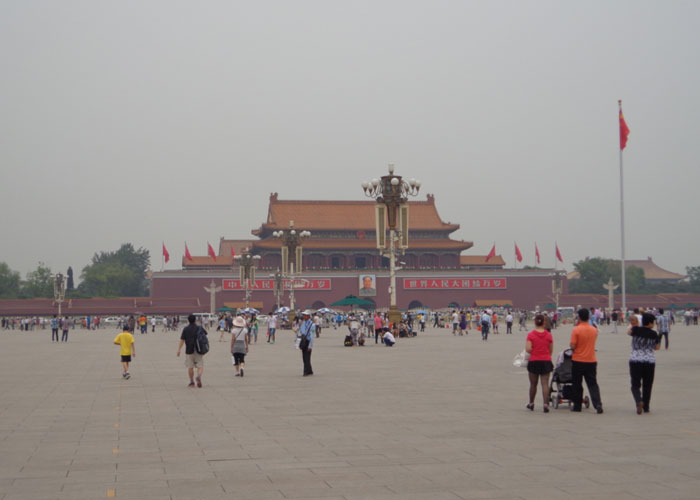 “The space was gray, dour, wide as six soccer fields. And the two massive buildings—the National Museum and the Great Hall of the People loomed over the square. We were on the west side, close to the Great Hall where two Chinese men dressed as Santa Claus were performing choreographed kung fu for a crowd.”

The Tiananmen Square massacre of 1989 is at the heart of this book for Ivy and Alex. Ivy was directly impacted by it, Alex by proxy. They travel together to Beijing where Ivy wants Alex to meet with an underground leader of the democratic revolutionary party. Tiananmen is obviously a major tourist attraction. You have to do all the touristy things here because they’re astonishing. You’ve never seen anything like the Forbidden Palace or the Temple of Heaven. It’s nuts. So do all that.

One thing I can say is that I didn’t have any idea what I was going to write when I got there. I let the research guide the plot of the novel. I wrote about that here. One of the big moments for my research occurred when I was in an amazing desert shop in Foshan named Hui Ji Tang Shui (辉记糖水) on Liao Yuan Lu, (燎原路). I was with a Chinese friend of mine who was explaining how when she was in college she went to the library looking to read about the June 4th, 1989, Tiananmen Square Massacre. She went to the library but all the newspapers were missing from June 1st to June 20th. No one talks about Tiananmen. Her Dad only once spoke of it to her and never again. Her school textbooks had a few mere sentences for the Great Leap Forward, which cost 45 million lives. So then she checked over both shoulders, leaned forward and whispered to me, “I shouldn’t be saying these things.”

I was stunned by the power of the government to erase 20 days in 1989 from a young Chinese woman’s life. Sitting there eating ginger-milk curd and black sesame pudding, the novel suddenly started to take shape in my head.

I wrote down everything I saw in China. I took hundreds of pages of notes and ended up using very little of it to write the book. But I learned a tremendous amount. I like learning, so the research was one of my favorite parts of writing the book. Also the dumplings. I ate a lot of dumplings. The food in China is the best I’ve had anywhere in the world. You should go there. The culture and history are utterly fascinating.

Thank you so much Spencer for such an amazing and fascinating insight and mega booktrail!