Letters from a Murderer – John Matthews

John Matthews is chatting about Letters from a Murderer on the blog today. The darkness envelopes my house like a cloak. The rain is pummelling angrily on the windows as I look anxiously at the clock on the wall. I’ve just taken the cake out of the oven and am waiting for my guest to arrive. Even though I don’t expect him for another hour at least, there is a knock at the door. Then, to my horror, the door opens, its creak announcing the arrival of a visitor dressed in black. He appears to float towards me, although I want to scream, I find that I  can’t. Then it all goes black.

Booktrail the locations in the novel Letters from a Murderer here 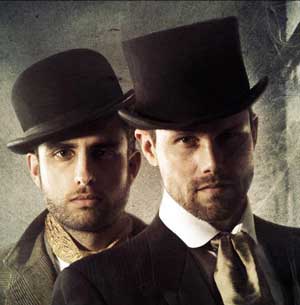 I come round a few moments later to find John Matthews sitting in the armchair smiling at me. His black cape/raincoat hanging over the side of the chair, wet from the storm. ‘Well that was some entrance!’  I tell him when at last I have found my voice. I smile, relaxing in his friendly presence and go to fetch the cake.  He is jovial, kind and eager to talk about his book. I start to relax in his presence. Quite an apt entrance for an author who has written about Jack the Ripper!

So, once we have exchanged pleasantries and the cake is served, here is what I found out –

Someone has said that if Arthur Conan Doyle had been asked to write a sequel to Gangs of New York, then this would be it. How does that make you feel?

I thought that was great praise indeed and ‘spot-on’ in terms of what I’d aimed to achieve with the novel at the outset. I wanted a ‘Holmes-style’ partnership, but the gang culture of New York was so real and gritty in that era that I felt I wouldn’t be doing the book justice without covering that aspect too. So that becomes an excellent counter-point to the Ripper investigation.

What was your inspiration behind this novel? Apart from Jack the Ripper of course. What made you want to write this side of the story?

The basic concept for the novel stemmed from a recommendation from my agent, but I said at the outset that if I was going to develop the book I wanted it to have a distinct identity from other ‘Ripper’ books. The New York settings of course gave one marked difference, gang culture another, but the final difference was in getting ‘under the skin’ of the victims and potential victims. I felt that these had been dealt with far too remotely in past Ripper books – so Ellie Cullen and her little commune and the wider ethos of girls working on the street I wanted to deal with in a far more empathetic way. After all, there was no social security net at the time, and for many of these girls it was either work the streets or let their kids starve. Then also we have Argenti’s secret with his sister, which adds even more personal empathy to this issue.

What research did you need to do?

I knew New York very well from past visits, but of course the New York now to 122 years ago is very different – so the rest was gained through exhaustive research, both through books and online.

How do you think setting is important in your novel?

New York of 1891 was a very changeable, vibrant period. A melting pot of cultures and fast changing. The polarity between the rich and the mean streets of the poor was even more marked then. Open sewers and non-existent sanitation in many areas, with 200 dead from cholera in one tenement building alone; these were the sort of harsh, gritty issues I wanted to bring to life in the novel. 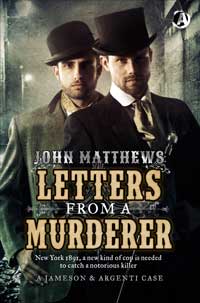 Can you tell us more about your fantastic crime fighting partnership of Jameson and Argenti? It was quite unlike anything else I had read before!

Jameson was developed as such because I felt it was important to have someone with past Ripper experience for this particular investigation; also I thought it would be interesting to have someone transposed to New York from another culture (an early ‘Englishman in New York’, if you will).

This made him very different to Joseph Argenti, a nonsense cop from a far tougher background, rising up the ranks mainly due to his anti-corruption stance. These differences cause some conflict between them initially, before they realize they have some things in common. Both cannot be bought or swayed by the city’s leading gangster, Michael Tierney, plus they also have soft spot for the city’s underdogs, waifs and strays: Jameson because of his experience with his mother, Argenti because of his sister. They then gain further mutual respect for each other through the tenacity they lend to the investigation.

I really did enjoy the partnership they had. Very interesting to hear how that all developed. Would you fancy another slice of cake? I made it myself you know. Freshly baked this morning. Yes? Here you go (Before he gets a chance to take a bite I ask him another question hehe)

Yes, there’s certainly more to come. In fact from foreign rights so far sold (one of which is to Random House in Germany), a number of them have in fact already bought two books in the series with more to come.

Which crime authors and historical writers do you most admire?

Amongst modern day writers, I’m a big fan of Dennis Lehane, Harlan Coben and Stiegg Larson. For historical thrillers, Conan Doyle (of course) and Dickens. I was particularly touched by how Dickens’ writing influenced the people of the time, made them far more aware of child labor, work houses and debtors’ prisons – to the extent that this then influenced new laws.

What book are you reading at the moment?

On a book trail of your novel, what would be a highlight? (interesting place, spot, character that you enjoyed researching or writing about)

Sweeney’s Shambles (which exists in real life) and the ensuing sewer scene are probably my favorites, with the river pirates and ‘crimp house’ scenes running a close second. For me this was quite an eye-opener realizing that river pirates operated in the East River docks in that era, plus crimp houses where they’d lure sailors seeking lodgings, then either poison them or cut their throats having robbed them.
Thanks for talking to me today John. I love finding out about the development of a book and what the writer ‘goes through’. It’s been a real pleasure chatting with you today.

And with that, John Matthews, author of Letters from a Murderer, says farewell and walks off into the darkness of the night.