WIT Month – Spotlight on German author Simone Buchholz – This month is all about women in translation of course and so who better to take a look at than the remarkable and unique Simone Buchholz. She’s from Germany and thanks to translator Rachel Ward, English-speaking readers enjoy her novels and booktrails around Hamburg… 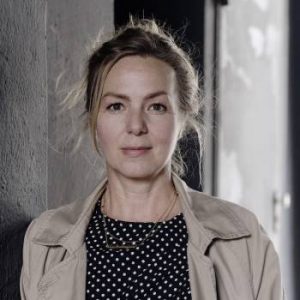 At university, she studied philosophy and literature.

Previous jobs: a waitress, columnist, journalist with training at the prestigious Henri-Nannen-School in Hamburg.

Lives: Sankt Pauli, in the heart of Hamburg, with her husband and son.

2016, Simone Buchholz was awarded the Crime Cologne Award and was runner-up in the German Crime Fiction Prize for Blue Night, which was number one on the KrimiZEIT Best of Crime List for months.

Literary Locations are mainly in and around Hamburg, Germany but there are a few trips in and around the country and beyond, too…. 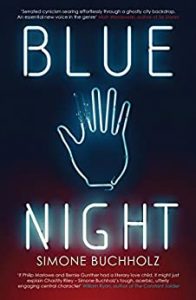 Most of the novel is set in Hamburg and the city is grim and dark throughout. You wouldn’t expect the city to be any other way in a Buchholz novel to be fair.

You have to take time to visit Schmilinskystrasse in the novel as it’s particularly unique and memorable. It’s “right on the border between the squalor behind the station and the elegant surroundings of the Aussenalster Lake”

Hamburg continues to be a city of darkness and murder as even the police have a certain way of describing their patch:

“If anyone gets half killed in a beating or a shooting or a hit and run anywhere in Hamburg, if anyone gets pushed off a bridge or a building and survives, it comes under my jurisdiction.”

The Blue Light  of the title really gives this book and the city a feeling of dim, glaring lights, neon signs and dubious clientele:

“The Blue Night is shut on Mondays and the boss goes shopping. Schnapps, pretzels, butter, liquorice. Then in the mornings there’s the beer delivery. Bottled beer Klatsche had draught beer poisoning a fear years ago. Badly cleaned beer lines. It happens, I said at the time.

So, there’s been a sign hanging over the bar ever since: 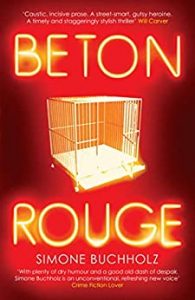 We start off in Hamburg but it’s not your usual tourist spot  – the scene of the crime is outside the newspaper offices where there is a cage on the pavement with a man inside, unconscious. He’s not the first either. The police in the city have a very unusual series of crime scenes to investigate.

The tour of the city takes you back to the Blue Club that we last visited in Blue Nights (first novel in the series).

You wouldn’t think that the police would link the case to the south of Germany, but they head to Biesendorf where they enter the elite world of boarding schools…

The title of the chapter as we head into Biesendorf is “Tuscany, my arse” and that says it all really:

“There’s a carved wooden village sign as you drive into the place. The sign says that this is the Franconian Tuscany’, which is pretty close to being a very bad joke. In Tuscany, there’s be people on the streets and in the squares: they’d be chatting, they’d be laughing, they’d be alive. In Biesendorf, nothing, absolutely nothing. is like Tuscany except possibly the fact that this backwater is set in a hilly landscape. And, OK, there are vines.”

They stay in a place called The Final Cut Inn.

“This is the Bavaria I know,’ says Stepanovic. “An undiluted mixture of suspicion and aggression.” 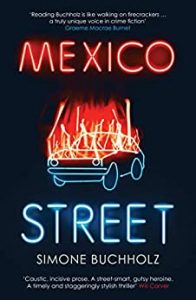 Mexico Street is a ghetto of high rise flats

Night after night, cars are set alight across the German city of Hamburg, with no obvious pattern, no explanation and no suspect. One of the cars contains the burned body of a major member of the Bremen clan.

The criminal underworld climbs out of each and every page and the extent of the problem reaches out far and wide across the whole of Germany….

The city’s criminal underworld is what you discover here. 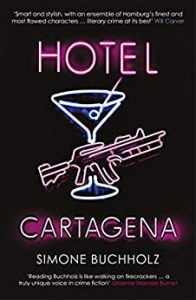 The latest book in the series keeps us firmly in Hamburg and we focus on the harbour, that prime locstion in the city where people and goods wenter and leave the city, fleeing possibly in a Simone Bucholz novel.

The area where the hotel Cartagena is located in the novel. The author lives here herself so knows and loves the area well. She weaves its story and atmosphere into the novel and shows off its many, often colourful, sides. At least this is the fictional view of it!

The Speicherstadt in Hamburg, Germany is the largest warehouse district in the world where the buildings stand on timber-pile foundations. There is a warehouse of interest here in the novel.

There are also flying visits to Curaçao, a Dutch Caribbean island, and Columbia for a drugs related storyline….

Imagine if such novels had never reached English eyes. What non-German readers would miss out on. That’s why WIT month is so important.