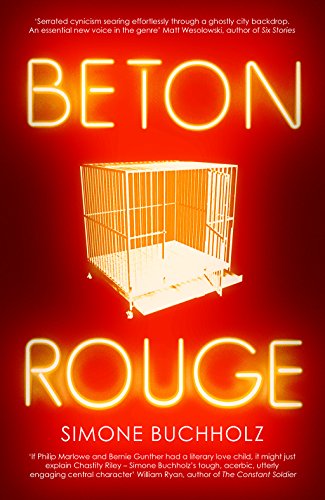 2000s: A man is found unconscious in a cage in the middle of Hamburg

On a warm September morning, an unconscious man is found in a cage at the entrance to the offices of one of the biggest German newspapers. Closer inspection shows he is a manager of the company, and he’s been tortured. Three days later, another manager appears in similar circumstances.
Chastity Riley and her new colleague Ivo Stepanovic are tasked with uncovering the truth behind the attacks, an investigation that goes far beyond the revenge they first suspect … to the dubious past shared by both victims. Travelling to the south of Germany, they step into the elite world of boarding schools, where secrets are currency, and monsters are bred … monsters who will stop at nothing to protect themselves.

The novel takes place largely in Hamburg and although the atmospheric harbour plays a role, it’s not a nice view. There’s a man in a cage, set outside the city’s well known magazine publisher. That’s not what you expect to see in this central and busy part of town.

But then the tour of the city takes you back to the Blue Club that we last visited in Blue Nights (first novel in the series). The view of the rest of the city is seen through the eyes of the policemen from the various police stations.

This is the gritty side of Hamburg, one with the strange case of the man found in a cage and the consequences of the investigation..

The title of the chapter as we head into Biesendorf is “Tuscany, my arse” and that says it all really:

“There’s a carved wooden village sign as you drive into the place. The sign says that this is the Franconian Tuscany’, which is pretty close to being a very bad joke. In Tuscany, there’s be people on the streets and in the squares: they’d be chatting, they’d be laughing, they’d be alive. In Biesendorf, nothing, absolutely nothing. is like Tuscany except possibly the fact that this backwater is set in a hilly landscape. And, OK, there are vines.”

They stay in a place called The Final Cut Inn.

“This is the Bavaria I know,’ says Stepanovic. “An undiluted mixture of suspicion and aggression.”