The Quiet Man, is the title of the book and not the author thankfully as I’ve popped into the departure lounge today to meet James Carol and I want to chat. I have a lot of questions for him and he is more than happy to chat if you provide food and drink. There’s Canadian delicacies on the table  – cookies draped in maple syrup, (ok not delicacies but a few fun snacks. James seems to want to order something else, but for now he seems quite happy to chat….. 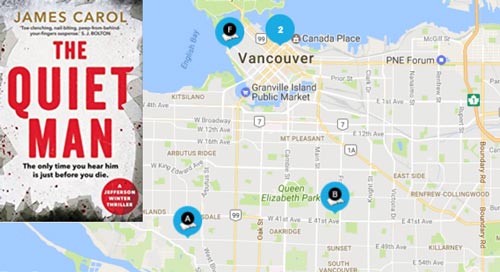 Winter works cases that take him all over the world, so choosing a location is one of the first things I do.  With The Quiet Man I didn’t want to set the book in the US since that was where the last two novels had been set; nor was I ready to bring Winter back to Europe. Canada seemed to bridge the two, so I went for Vancouver in the end.

One thing I love about these books is that the locations give each story a unique character and flavour – it’s almost as though the location is a character in its own right. That really helps to keep things interesting when I’m writing them.

Ideally I would  visit all of the locations I write about. Unfortunately that’s not always practical, so a lot of my research is done online.  Of course, the main limitation with that approach is that you don’t know what it ‘smells like in the Sistine chapel’.  There really is no substitute for experiencing a place with all five senses.

That said, the next best thing is to have a set of eyes on the ground. One of my wife’s relatives lives in Vancouver so I was emailing him all the time with questions while I was working on The Quiet Man.  He really helped me to bring my version of Vancouver to life. The Long Goodnight (book 5) is set in Berlin and my German publisher has hooked me up with a researcher who lives there. Even though I’ve visited the city just having someone an email away who knows the city inside out has been invaluable. 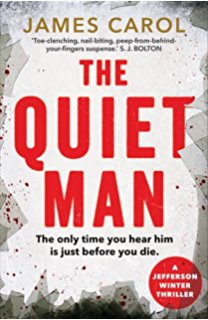 Why a former FBI profiler?

Songwriters often talk about how some songs arrive more or less fully formed, like they already existed. It was like that with Jefferson Winter. When I started writing Broken Dolls, he was pretty much there from the word go.  Quirky, brilliant and occasionally annoying. Halfway through the first draft I discovered that his father was a serial killer and that added another dimension. The final piece of the puzzle was a name. That came as a result of multiple emails between myself and my agent. In the end, she came up with Winter and I came up with Jefferson.

Winter has been a part of my life for five years now. We’ve travelled many miles together and I can’t imagine him not being around. On that basis, I’m not sure I have a choice when it comes to writing about him. Put it this way, if I stopped, I’m sure he’d have something to say about it!

Why is profiling interesting to you?

I believe that people are basically good, but it would be naïve to think that evil doesn’t exist. You just need to look at the news or history books to see that. On the face of it, murder is one of the most senseless acts there is, but dig deeper and there will always be a reason. Profiling is a way to make sense of the senseless. Like Winter, I want to solve the puzzle.

He is a well travelled man!

So far he has been to London (Broken Dolls), Louisiana (Watch Me), New York (Prey), Maryland (Presumed Guilty), Florida (Hush Little Baby) and Vegas (Open Your Eyes). My favourite place is probably Berlin. It’s a wonderful city with a unique history. Winter felt right at home there.

What kind of  detective/crime novels do you like to read?

When it comes to reading the only thing that matters to me is whether the story is any good; I don’t really care about genre. My favourite author is Stephen King. Even now people still pigeonhole him as a horror writer, but this is the same guy who wrote Rita Hayworth And Shawshank Redemption. Throughout his career he has tried his hand at so many genres , and the thing that shines through time and time again is that he’s a master storyteller. Incidentally he recently did a trilogy of crime books that were brilliant. Mr Mercedes was the first in the series … check it out. 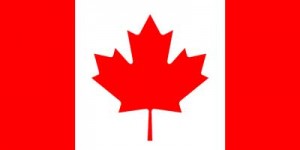 What real life case do you think Winter would like to solve?

I’m sure that Winter has theories for all the famous ones. The Lindberg Kidnapping, Jack The Ripper, the Kennedy Assassination. Some people do crosswords for fun; Winter solves crimes. Whether that crime is a century old or a day old, the buzz for him is finding a solution for the puzzle.

Would Winter be good working with a fictional detective or even criminal? 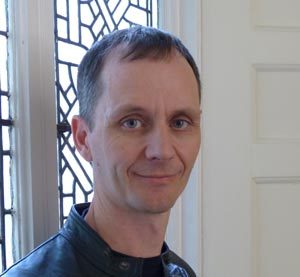 Thanks for the chat James. Now shall I order us something else?

Liver with fava beans and a nice chianti!

Aaaaaargh! (runs from the restaurant in fear)