Postcards and all things Greek with Victoria Hislop

I am nervous today. I’m meeting Victoria Hislop and she’s invited me to stop and have some “fava”. The Silence of the Lambs reference is not lost on me. Is this the same thing? I’m not sure, but then a bottle of white wine is delivered to our table. If this is Chianti, I’m off. 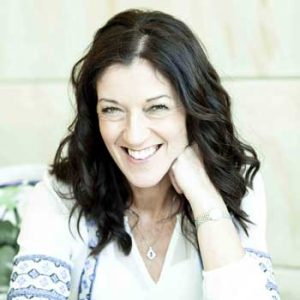 Victoria sees the look on my face and bursts out laughing. This is “fava” – she laughs – made from split peas (soaked overnight) and then boiled with onions and pureed. And lots of olive oil sloshed in. It’s delicious. Served with tomato salad and some tsatziki.  And to accompany it… white wine, very cold…… hope you like this Cretan Assyrtiko.

With my fear subsided and my excitement at having this lovely lady sitting opposite, I bombard her with all questions Greek!

This is a really unique book with photographs illustrating many of the stories. It looks and feels like a book you’ve always wanted to write?Oh tell us how it all came to be! 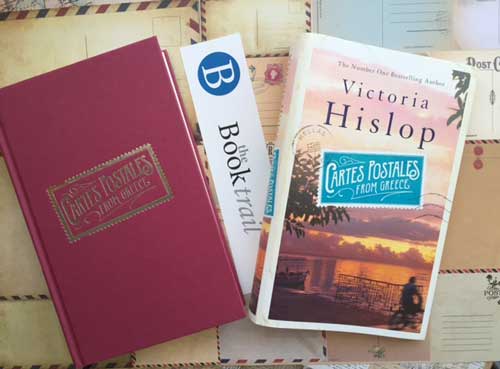 I have always taken lots of photos during my travels for research and then pinned them up around me as I write so that I could actually “feel” I was in the place (Greece mostly) even if I was a long way away.  Then, over time, I thought that it would be great to share with readers some of what I see in Greece.  I spent hours in bookshops (in the UK and in Greece) seeing if there were any adult works of fiction that use colour photographs.  There were NONE!  Not a single one.  Children have colour colour colour – and then suddenly once they are adult, it’s just type!  So… I decided that I would create something where photos and text were very integral – and my publisher, Headline, kindly agreed (obviously production costs are in another league..).  I travelled with a Greek photographer and while I was researching, and while ideas were flowing, he took the photos. 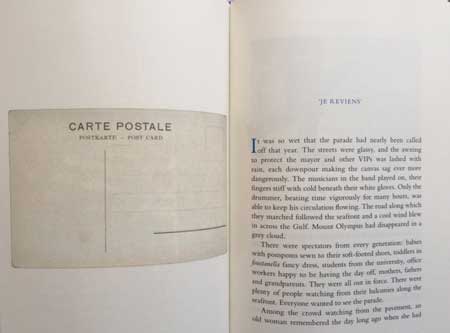 Your love for Greece is legendary. Do you have a favourite story in the book and why?

I do.. I can’t say exactly why.  But I am proud of “Je Reviens”.  It brings together many different periods of Greek history, many different prejudices and issues in modern Greek society, but in a love story.  The story came together in a way that, as a writer, I always hope a story will “gel”.  It felt as if the building (that provided the inspiration) had been waiting for its story to be discovered.  And it is set in Thessaloniki, a city that I love very much.

The idea of someone following a trail of postcards or from a notebook is magical. Ellie has quite a challenge on her hands – how does she change as a character for you?

Thank you!  I found the idea interesting, because in a quite a big way, she is doing something that she shouldn’t… in effect reading someone’s diary/private correspondence.  But it leads her to such a good place (physically and emotionally) that in the end I think it is justified.  And also, what was interesting, was that it brings in this other “voice” of Anthony – and by having his voice/words heard, he is brought to life again.  If words just remain on a page, unread, it’s as if they are sleeping.

Yes – she changes completely. This is an adventure for her – a bold action compared with the rest of her quite safe life.  She is ready for change though.  I think this is the important thing.  We can’t change until the moment is right – but then we have to listen and be alert, just as Ellie is.  “Know Yourself” – is always the goal! 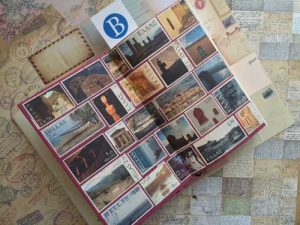 Have you ever received or found a postcard like this? Which fictional character would you like to receive a postcard from and why?

In the past year or so, I have bought postcards on market stalls/in flea markets – some of them very old.  And each time, I get a glimpse of a stranger’s life and it slightly makes my hair stand on end!  I would like to get a postcard from Heathcliff’s mother – saying where she is, and how Heathcliff came about!  I think she would be on the other side of the world now…

Your book captures the magic of travel and books and how words can also travel via postcards. Which book would you like to do a booktrail of ie visit the locations within it?

I think I would like a booktrail of Murakami’s IQ84… It’s set in Japan, a country I have never been to and I am intrigued to go.  I have never in my life received a postcard from Japan.  The book is a masterpiece and the postcards would be mysterious and beautiful since the book is quite surreal.  They would not be normal “wish you were here” pictures of beaches and cities – they would be other-worldly. 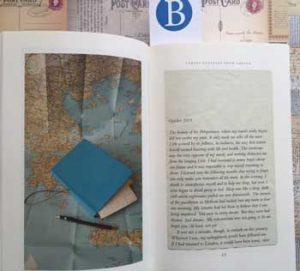 Do you think people should still write postcards and why are they so enchanting?

I think they will come back as a fashion!  I hope so.  Texts and instagrams will soon be lost.  I have my grandmother’s postcard album (it spans the years 1906 until around 1950) – it is a treasure!  It tells me about my grandma, about her friends, about the way people lived and thought and wrote.  And what England looked like then!  It is a book of social history in postcards – so precious.

When sometimes writes you a postcard, they have to stop for more than five seconds to think about you, to compose the right message, to find the stamp, to address it and send.  There is a lot of thought and love in a postcard.

Your journey shows Greece in a magical and wonderful light in so many ways. Did you do any special research or research places etc differently due to the nature of the book?

I travelled all around Greece for this book.  I went to all the places that Anthony does, and many more.  My eyes were constantly wide open to new sights and my ears open to learning some new and extraordinary things about this country.  It has already been described as my love letter to Greece – which it is – but at the same time, I don’t hold back on describing things that disturb me here so it is not just a picture postcard image of this country that I am showing readers – it has some of the more complex, darker side too, the reality…

And finally…..Do you have a favourite Greek phrase or saying?

A few years ago, my best Greek girlfriend taught this to me – and I promised that in an interview I was doing on the radio, I would use it three times…. So that a) it would stick in my head and b) she would be listening and smiling!

And I use it every day now… the real point is, that most things worth doing require some effort… so yes, “aksizei ton kopo”!
And that is a good place to finish chatting with my first review in Greek ‘ Get this book, highly recommended book of Greek essence – “Aksizei ton kopo” . And that’s a guarantee.