Poznań and Posen – a journey by Carolyn Kirby

Today is a special day – VE Day  – and it’s also the day that When We Fall is released into the world. This book has been published in order to coincide with the 75th Anniversary of VE Day. This year, 2020, is also 80 years since the Katyn massacre. There’s also another date to remember:  10th April as this marked the 10th anniversary of the airline crash that killed top Polish dignitaries on their way to Russia to commemorate the atrocity. 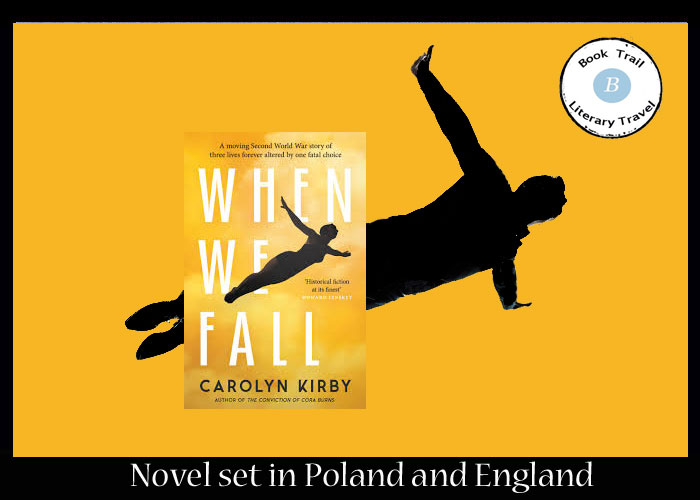 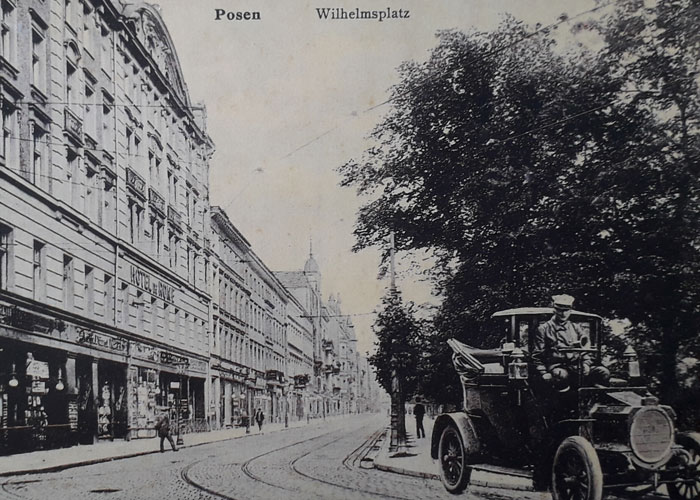 All of the main characters in my new novel When We Fall have mixed national identities and sometimes, divided loyalties. The same is true of the main location in the story, the city of Poznań.

Poznań is an ancient Polish city, home to the first Polish kings in the middle ages. But for more than a hundred years spanning the 19th century, it was the heart of the Grand Duchy of Posen and firmly part of Germany. And just like Ewa or Eva, the heroine of my novel, Poznań had two names; Poznań to the Poles, Posen to the Germans. The legacy of the city’s split identity has enriched its architectural history and helped make Poznań a fantastic place to visit. 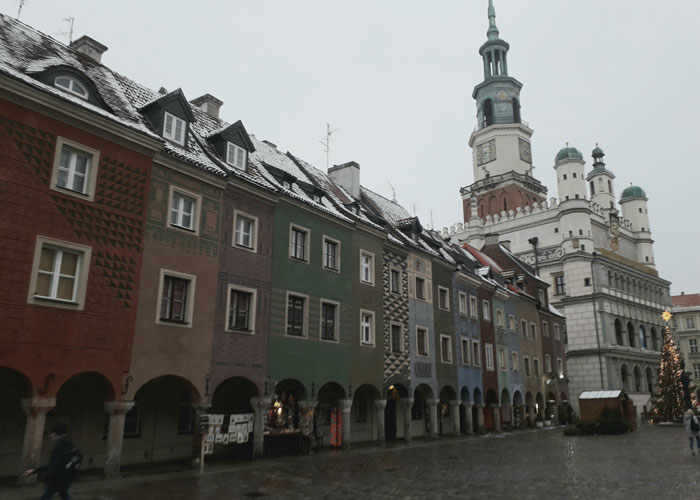 The centre of Polish Poznań is the Old Market Square, the home of the Town Hall, a wonderful Italianate building dating back to the Renaissance. It is here on the square that I imagined Ewa living in the family guesthouse during World War Two. She would have been working hard to host the occupying Nazi officers billeted in her home whilst secretly gathering information for the Polish resistance. The atmospheric jumble of narrow cobbled streets and ancient painted houses really helped me to envisage these scenes and bring them to life on the page.

Whilst writing the novel, I made a couple of trips to Poland but only for family occasions. I visited the relatives of my Polish sister-in-law, Asia, who is from a small town west of Poznan. These trips ignited my interest in the complicated history of the borderland between Poland and Germany, but the only part of Poznań I saw was the airport. So, I did most of my writing with the help of Google Street View. This turned out to be a fantastic way to wander around the virtual city. I was able to study certain buildings closely and getting a feel for Poznań’s distinctive districts. 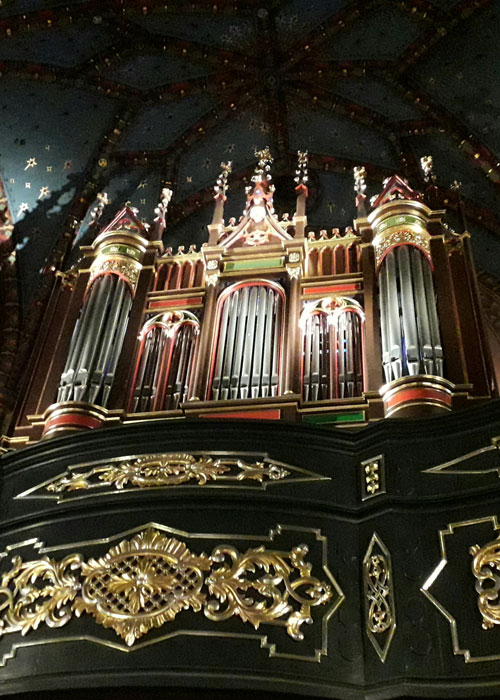 But there is no substitute for a visit. And so, before embarking on a final draft of the novel, my husband and I took a wintry trip to Poznań. Thanks to Street View, I knew my way around but pictures had not done justice to the cityscape. The scale and beauty of the historic buildings constantly took my breath away. Then you have the breath-taking interiors of traditional Polish churches like St Wojciecha (St Adalbert’s in the book).

In contrast to the Old Town, the most German part of Poznań is the Castle District. At the heart of this ares is the Imperial Castle, an imposing royal residence built for Kaiser Wilhelm in 1911. There was a brief period of Polish independence afterwards but this was crushed during the second world war. The Nazi occupiers then used the castle as their headquarters. 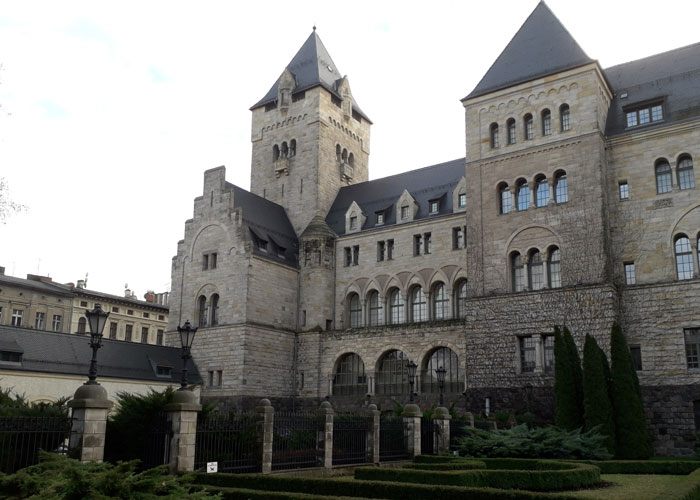 On a bespoke tour of Poznań’s WW2 sites, our excellent guide sneaked us into some parts of the Imperial Castle which were officially closed. This meant that we were able to stand on the grand balcony. It had been specially built for Hitler to survey the city he had conquered, although in the end he never visited. The view is astonishing for the grandeur and the Germanness of the scene. Surrounded by the triumphal Greek columns of the Opera House, and the domed stone splendour of government buildings and banks, it could almost be Berlin. 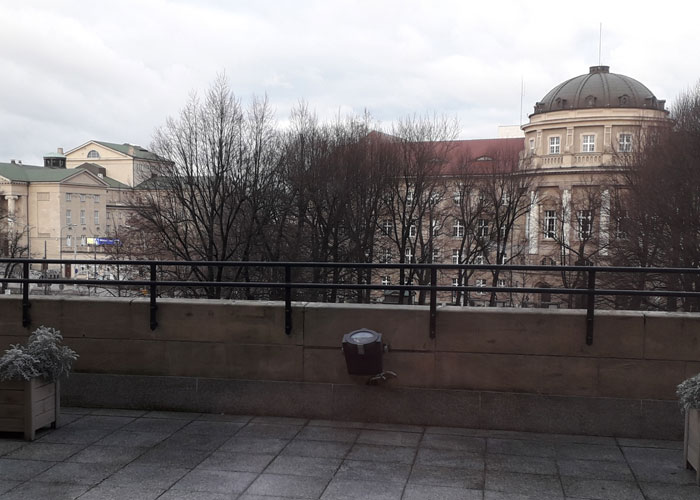 The Imperial Castle has been successfully converted into a cultural centre with theatre, cinema and exhibition spaces. In the story, Ewa has a clandestine mission that takes her to Poznań’s new indoor swimming pool. I consider this a true symbol of the second world war’s impact on Poland as a country. It was originally constructed in the early 1900s as the huge and ornate synagogue for Poznan’s Jewish community. However, during the war the occupying Nazis turned it into a plain and functional Olympic sized swimming pool. Inside and out, they eradicated any traces of Judaism  and they left no trace of the building’s religious purpose. 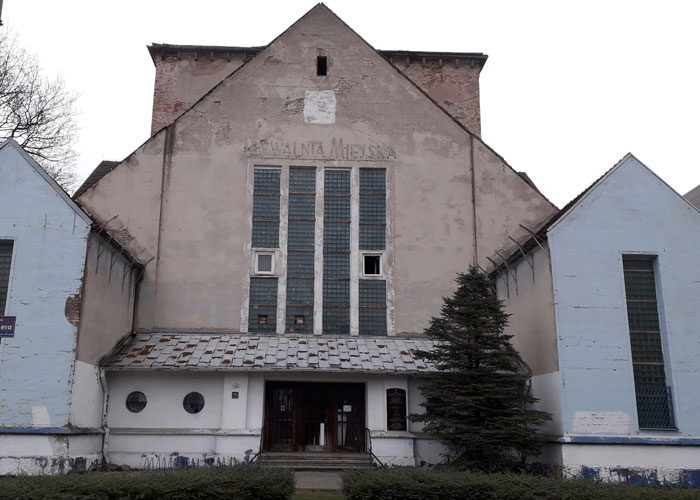 Incredibly, after the war, the converted synagogue continued to be Poznań’s municipal swimming pool for over 60 years. Since 2007, however, the building has stood empty. The Jewish community are the owners once again and they use it for concerts and art installations. Sadly, it is increasingly falling into disrepair. The old swimming pool remains, like so many of Poznań’s buildings, as a vivid reminder of the sometimes tragic history, as well as the mixed cultural heritage, of this fascinating city.

BookTrail Boarding Pass: When We Fall

BookTrail review: When We Fall BookReview