BookTrailing it to 1940s Stockholm

Codebreaking in Stockholm in the 1940s

Sweden and Scandinavia as a whole is well-known for its Noir, its grisly crime stories and even darker characters. Not so well known to the English-speaking world is the historical fiction. There are some really good historical fiction novels – How to Cook a Bear – is one such novel that has been translated. I’ve just come across one that isn’t  – yet. It’s a kind of Bletchley Circle Swedish style…. 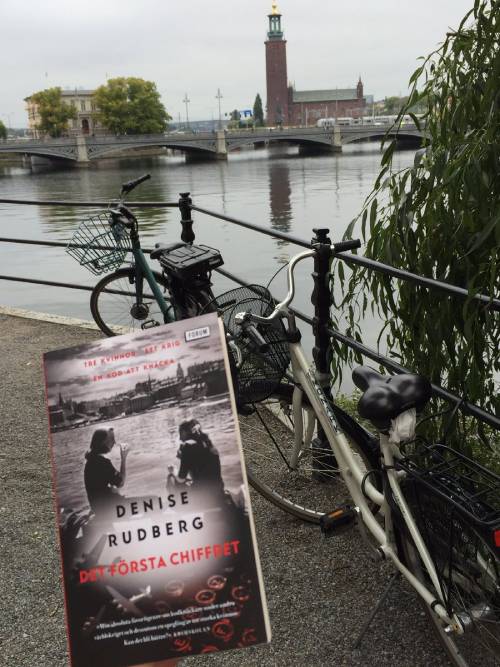 Recreating the cover of the novel

The fact that Sweden was neutral during WW2 really fascinated me – how would a Bletchley Circle style novel work differently? Would it be very different? What was life like for people during the war and those working inside the government offices during this time?

Turns out pretty much the same as in any country during war time. Just because the enemy isn’t at the door, doesn’t mean you can afford to leave the doors open….

The story starts in Estonia where we meet the first of the three women who each play a role in this story. Signe is sent away from the family farm when tragedy strikes and she is told that she should marry her brother in law to secure her future! Iris meanwhile, has to flee her home for another tragic reason. Then there’s Elisabeth who is Stockholm’s princess who loves to party and look nice. You’d never think that these women would ever meet let alone work together and be friends, but this is wartime.

The City Hall which features on the cover and in the novel:

This is about code-breaking but the focus of the novel is about these three women’s relationships at such a difficult time in the world. Men rule and men’s rules rule even more. What do you do when you are told to cut your hair as it might distract men? How would you react if forced to marry your brother-in-law? What about doing anything a man tells you to?

Stockholm comes through loud and clear as these women are sent to government offices for secret operations, go to secret addresses in plain sight, and have to criss-cross the city’s streets. I walked the streets close to the embassy, the City Hall and the Parliament buildings  –  inaugurated in 1905 and connected by underground tunnels  (see picture below)

Their perspective on life, barriers and their worries for their children is enlightening. There’s an undercurrent of mystery, shadowy figures in the background and even the women themselves might not be exactly who they say they are.

The codebreaking angle was in the background for most of the novel as the hopes and fears of these women took centre stage.

Oh and I didn’t expect one of the women to be a huge Jane Eyre fan and be like a child in a sweetshop when entering a library in a house….

I loved the way they came together and when I saw three women riding bikes together, I thought for a moment I’d seen Iris, Elisabeth and Signe….