Rachel Joyce is one busy lady – she’s been travelling around so many fantastic blogs on her official Queenie Hennessy tour that she is in need of a  nice cuppa and a cake we thought. The poor lady must be gasping for a cuppa! So, we invited her around to booktrail towers and while we didn’t have any cakes to hand, we did do a Granny spread of chocolate biscuits fanned out on a plate as we used to have as a child. 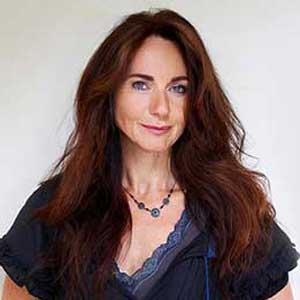 Hi Rachel! Ah you must be exhausted! Come on in and put your feet up – I’ve bought some new slippers you might want to use to treat your tired and weary feet. And I’ve some questions in in exchange for cake. Now I’ve warmed the tea pot. Would you like milk? Sugar?

Got so much to ask you. Queenie’s story is such a brilliant companion to Harold’s side of the tale -Why did you feel that it was important for  Queenie to have a voice? Why did you want to tell her side of the story?

After the publication of ‘The Unlikely Pilgrimage of Harold Fry’ I began to feel that I had missed an essential part of the story; after all it is a book about journeys and destinations and Queenie’s journey is the biggest one of all. I couldn’t have included Queenie’s voice in the first book because the tension lies in the fact that we, like Harold, don’t know if she can keep living whilst he walks. But I did feel that the story had to be completed. That Queenie had to have a life and a voice. It is like telling the story in reverse shot. It requires the balance. 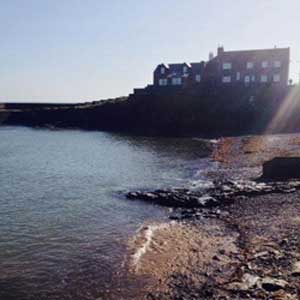 What did you do to find the perfect home for Queenie in Embleton Bay?

I had a picture in my mind of where Queenie lived – the beach house and the view over the sea – and so I kept going back to that part of the Northumberland coast. The day I found Embleton Bay I felt a huge rush of excitement. It was as if my imagination had suddenly become real.

Tell us a little bit about Queenie

She is a woman with secrets. I love the idea that just because she didn’t say a lot in Harold’s car, it doesn’t mean she hasn’t hundreds and thousands of words and thoughts inside her. She has a robust wit too. I like that.

The scenes in the carehome were very sad to read. How were they to write?

They didn’t feel sad to me because there is also humour. Having visited hospices, it was important to me to present them in a very positive light. The patients are not there to die. They are there to live until they die. And they do. They grab life by the neck and hang on. There is nothing but the joy of the present moment. 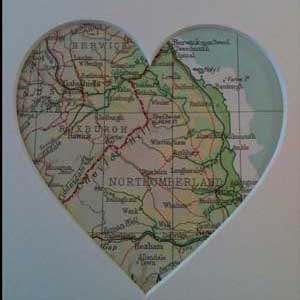 On Harold’s route, what are the main stopovers that you would recommend for a booktrail?

I like all of them. Once you write about a place or a person, I can’t help but care for it.

Where do you think Queenie would like to visit?

I wish I could take her to a tea dance at the Waldorf.

Queenie and Harold’s story is about a letter which starts a journey – have you ever written or received such a letter? Do you think the art of letter writing is a forgotten art?

I have never received quite such a letter – though I have received letters that I keep. Shortly before he died, my dad wrote to me. It doesn’t quite make sense to me, his letter, which makes me think he was already in a different place. And I still have the last Christmas card my grandfather sent me. My husband and I exchanged a whole load of faxes after we first met. I keep those in a shoebox, although I was devastated to find when I last looked that most of the writing has faded to almost nothing. I suspect texts and emails have to some extent replaced letters and postcards – but if want to say something important, I still try to write a letter.

Do you know Berwick well and if so what do you like about it?

I don’t know it well though of course I have visited. I gave a talk very early on about ‘The Unlikely Pilgrimage of Harold Fry’ at the library and I have been back since, just to walk around the town.

On your tour of bookshops and signings, are you travelling as far as Harold? hehe?

We are definitely covering as many miles! I try to walk every day in each place we visit, just to get a sense of where I am, but I travel the spaces in between by train or car. (Otherwise I will never get the chance to write another book.)

Thanks Rachel. I’ll put the rest of the chocolate biscuits in a box for you to take away with you  – the wagon wheels and the mint viscounts. We won’t eat them. I don’t know why we buy them to be honest….

Thank you so much Rachel for popping over. You can keep those slippers you borrowed – they’re new. Your feet need a rest after all that walking.

As Rachel leaves, there’s a whisper of a voice on the wind as I close the front door of Booktrail Towers…

“And we wait, all of us, Harold: the singing, the wind, the night. We wait for you”