Maitland of the Moors – A gathering of ghosts on Dartmoor

Karen Maitland, the Queen of the Medieval thriller has left the mists of Dartmoor and swept into a lovely house just off the moors made from sticks and gothic towers. We are there to talk about her novel A Gathering of Ghosts. There’s bottles of green liquid bubbling away on the table in front of us, biscuits in the shape of ghosts and a tea pot covered in cobwebs. Be afraid, a voice inside my head tells me.

But Karen Maitland couldn’t be nicer. She covers up the statue of the golden snake once I tell her I think it’s looking at me. And then I can relax and chat with her…about her fantastic new novel. 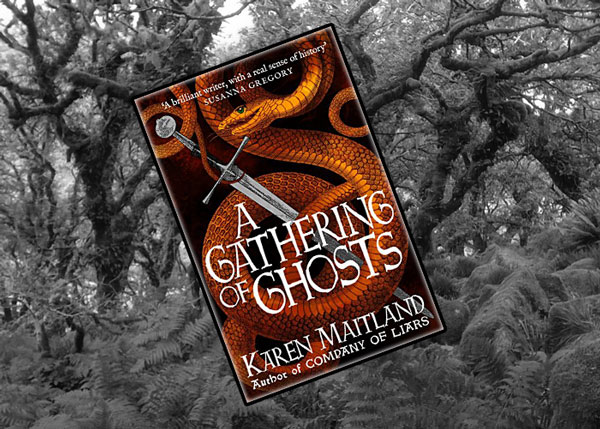 1316, the year of the Great Famine. Beneath an isolated priory of the Sisters of The Knights of St John on Dartmoor is an ancient holy well, once dedicated to the old goddess of the moor.

Locals believe Dartmoor was theirs long before Christianity came to the land and not all who visit the well seek healing. When three strangers reach the moor, fear begins to stir, as the waters run with blood. What witchcraft have the young woman, the Knight of St John and the blind child brought with them?

The Sisters find themselves fighting for survival as, like the deadly moorland mist, the ghosts of the past close in around them. 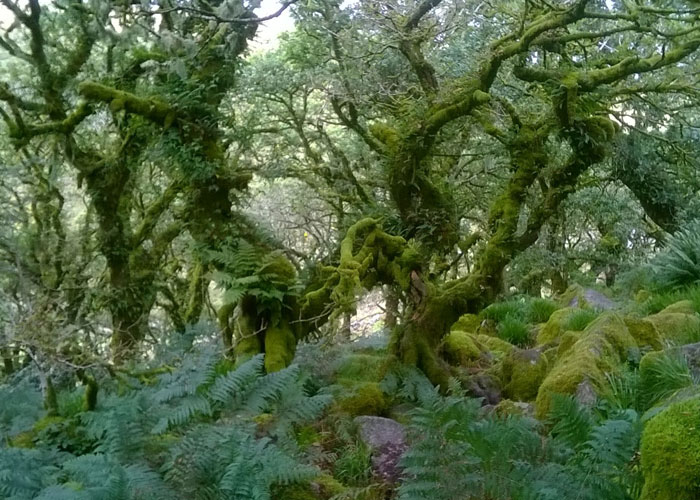 Nearly every tor, bog and stream on Dartmoor has some kind of ancient dark legend associated with it, because Dartmoor is such ancient, atmospheric landscape. When the sun shines glows with colour and light, but in blink of an eye a mist can descend and turn it into one of the most isolated and sinister places on earth. It is place where you can still dance round the stone circles of the old gods and shudder at the granite crosses marking the spirit or coffin paths of the dead. A magical, enchanted land.

“You’ll need more than a sword to protect you up there. Other side of that priory stands the most accursed hill on the whole moor. You can hear the dead whispering among those rocks. Hungry ghosts, they are. There’s many has heard them talking, and some even followed the voices into the caves up there. Followed them in, Brothers, but never came out …”-  A Gathering of Ghosts 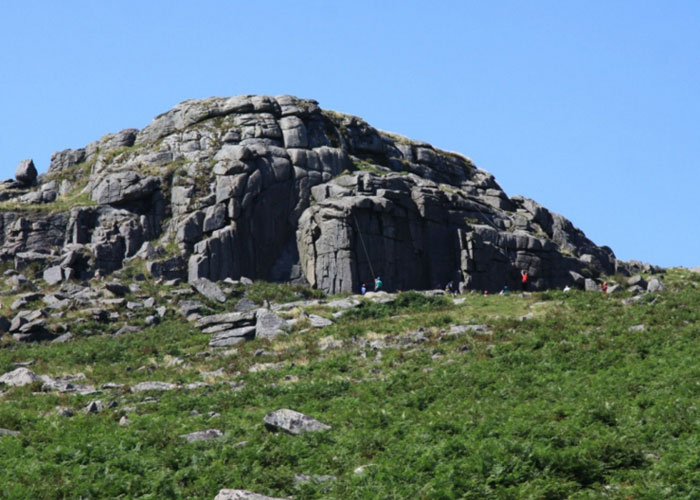 I began by devouring as many of the old legends as I could find in ancient books about the moors and visiting museums, like the one at Tavistock to explore how medieval tin streaming changed the landscape. Then I walked the moors in different seasons to see how the landscape and colours change. I visited Sheepstor where there is knocking cave high up in the rocks of the tor behind the village. For centuries people have reported hearing strange sounds coming from inside it. 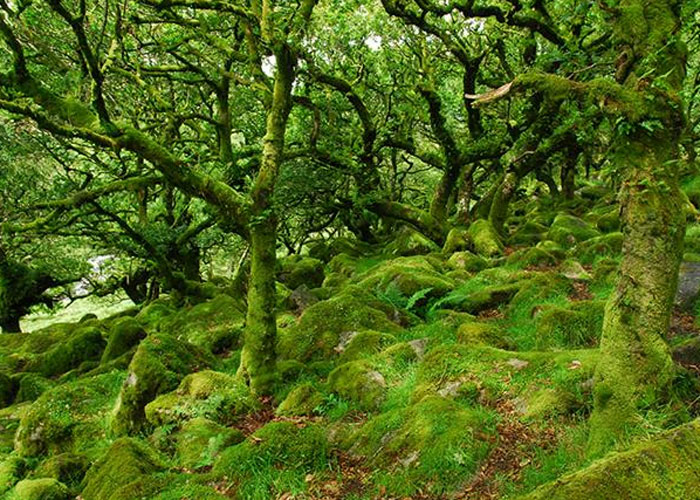 I also spent time the sinister Wistman’s wood, which is an ancient grove of twisted oak trees, where I knew wanted to set one of key dramatic scenes. I clambered over the huge mossy-covered boulders that litter the hillside there so I would know how difficult it would be for my characters to do that. One night, I was seating still as darkness fell and I watched a wren singing then vanishing into stones where before I hadn’t even seen a gap between the rocks. This was so magical it inspired one of key images towards the end of the novel. 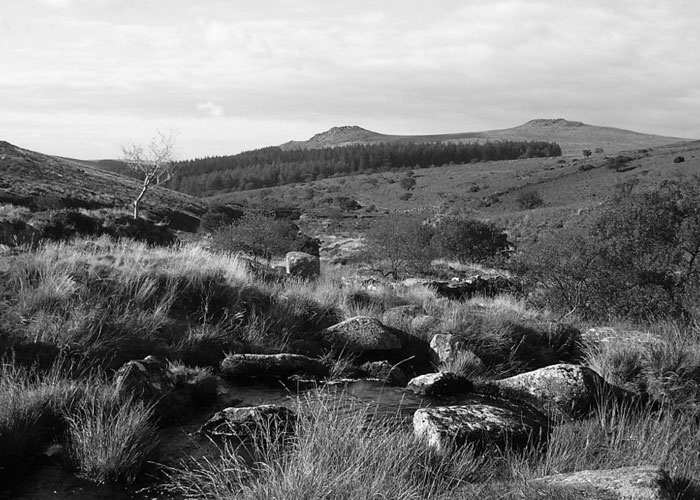 Sharpitor & Leather Tor down the valley of the river Meavy.(c) wikipedia

There are a number of knocking caves or tors on Dartmoor such as Sheepstor, from which the sounds of tapping, whispering human voices, wailing, music and singing can be heard. Many have thought there were people inside and were so convinced they went in to investigate, but found the caves empty. These noises really do seem human and I discovered they are loudest a day or two after heavy rain. The streams and rivers on Dartmoor, too, often make a singing sound, so you think you can hear voices even when there is no one around for miles.

But it was while I was exploring Sheepstor village that I saw the strange, ancient carving of the head or skull which is now embedded in the wall above the church door. This became the inspiration for the pagan carving down in holy well beneath the priory in ‘A Gathering of Ghosts.’ Everyone seems to see a different image in the carving. 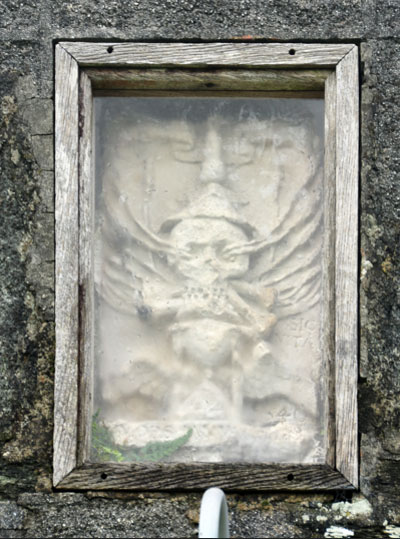 Where should Booktrailers go to visit your book? 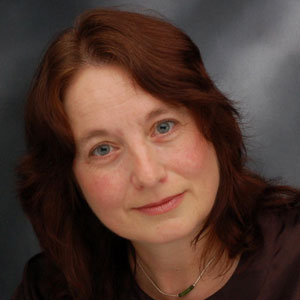 Some tors close to the roads can be reached on safe, clear tracks from the small carparks on Dartmoor. But if you are venturing on foot across the moors wear good walking boots and take warm waterproof clothing, food & water and a stick to test boggy ground. Travellers in the past feared being ‘pixy-led’, meaning being ‘hopeless lost’, especially when a mist comes down, which it does in minutes, even on a sunny day. Even today, with modern technology, people can still get lost and die from exhaustion, wander into bogs or fall over cliffs, because satnavs and mobile phones often stop working out on the moor.

But if you visit the tor at Sheepstor, take a while to explore the beautiful little village below it where you will find a holy well, two ancient stone crosses, the remains of a bull and bear baiting field, a beautiful reconstructed rood screen and a Pua Kumba in the church, and also in this English churchyard the tombs of three Rajahs of Sarawak.

And if you are in Widdecombe-in-the-moor (of Widdecombe Fair and Uncle Tom Cobbly fame) drop into the church where you will read the strange but true tale of when, in 1638, a lightening ball smashed through the church from out of clear blue sky, killing 4 people and maiming 52 of the congregation.

And with that, we sip a little more of that green bubbling tea, Karen then gets back on her horse and rides off into the mist…..