Strangers on a Bridge in Switzerland with Louise Mangos

There’s a visit to Switzerland today on the BookTrail. A lovely part of the Swiss Alps, where there are valleys to explore and bridges to get the best view of some of the country’s most stunning scenery. But Strangers on this bridge are not the kind of people you’d want to meet on your stroll or jog…just as the character in the book does. She meets a man about to jump off a bridge and manages to coax him away from danger. But that’s where the real danger starts… 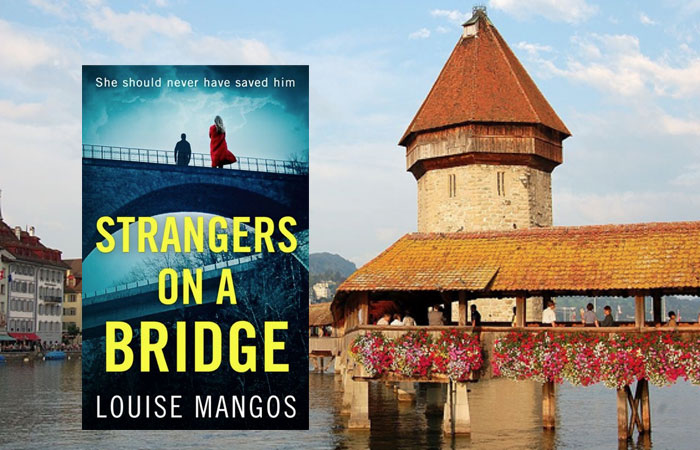 Strangers on a bridge

We moved from the French part of Switzerland to the canton of Zug after my first son was born. As I spoke no German then, we decided I would stay at home to look after our family, and in the little time I had between parenting tasks, I continued to write the fiction I had dabbled in for the past few years. The ambition to write a full-length novel coincided with my journey back to fitness after our second son was born. I began running some of the most beautiful trails in central Switzerland. These same trails are the ones Alice runs on in Strangers on a Bridge. A vast network surrounds the spectacular Aegerital (Aegeri Valley) with the Aegerisee (Lake Aegeri) at its centre. 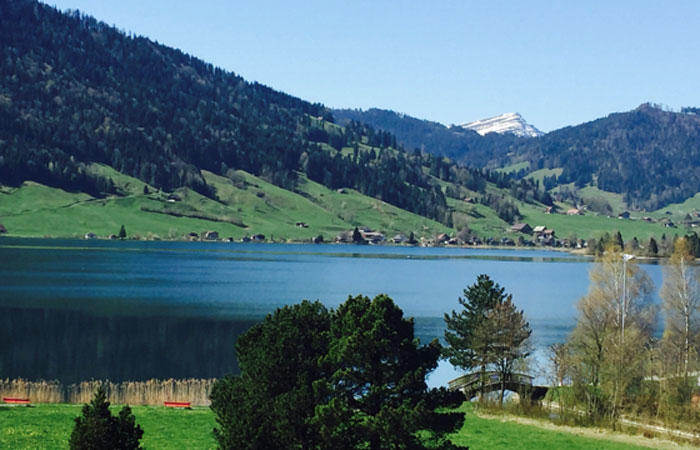 The trail in the opening scene of Strangers on a Bridge follows the Lorze River towards its source in the Aegerital up a gorge near the town of Zug. The trail lies next to the river, heading directly under the giant arches of the middle Lorzentöbelbrücke, or Tobel Bridge, and passes the massive concrete pillars of the modern bridge. Through the arches of the middle bridge Alice sees Manfred contemplating ending his life on the upper bridge.

The Lorzentöbelbrücke have a dark history in the canton of Zug. Both the middle and upper bridges are renowned for their suicides. While I was running under the arch one day with a friend, we discussed the horror of maybe seeing someone up there on the edge. The idea for my novel took shape. It led me to wonder how the grateful victims who are stopped from taking their lives deal with the consequences, and in my mind the character, Manfred, was already obsessed with his saviour, Alice, without her initial realisation. 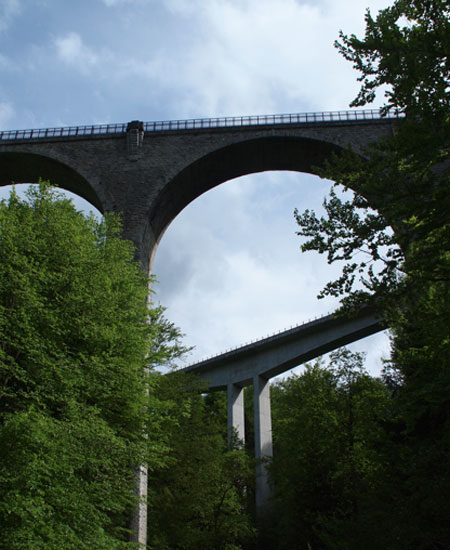 The original Tobel Bridge is a covered wooden structure across the Lorze River at the base of the gorge underneath the newer bridges. It was built in 1759 but has recently been renovated with the roof tiles replaced. There are several such bridges across smaller rivers throughout Switzerland and some more substantial constructions in major cities. The most famous of these is probably the Kapellbrücke in Lucerne, which is the oldest covered bridge in Europe, built in 1333. 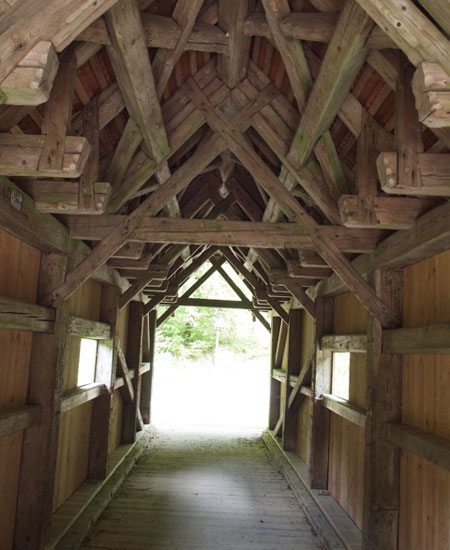 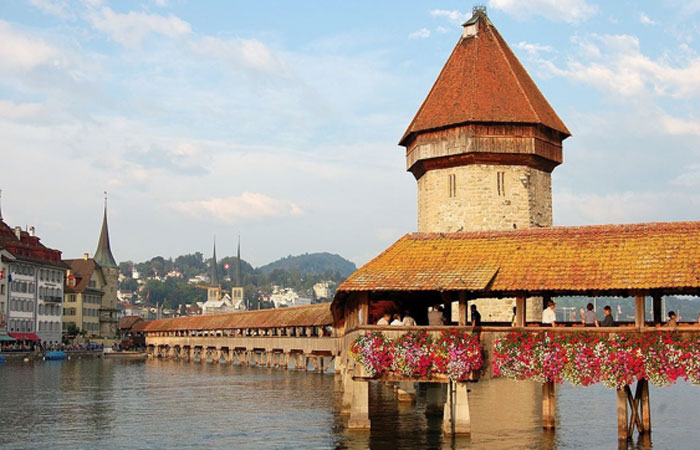 Although Switzerland is spectacular in all seasons, the country is perhaps more commonly recognised as a winter holiday destination. The protagonist in Strangers on a Bridge, Alice Reed, is an avid sportswoman. During the winter season in the novel, she learns how to cross-country skate ski. Her local loop, or ‘loipe’ as it’s called in German, is only a few minutes’ drive from her home. The area is called Rothenthurm in the neighbouring canton of Schwyz, and the loipe covers one of the largest protected moorland areas in Switzerland. It has been rumoured that beavers may be returning to the area, but one wonders how they would survive the winter when the habitat looks like this: 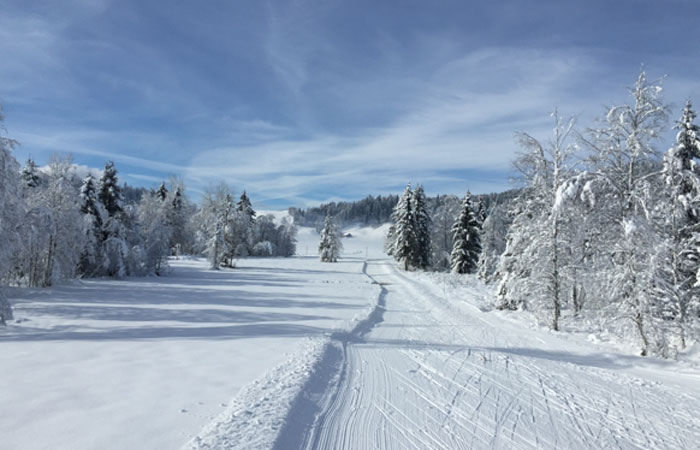 Switzerland in the snow © Louise Mangos

While researching Strangers on a Bridge, I interviewed a member of the Zuger Polizei in order to report the correct cantonal police procedures in my narrative. Although the main police headquarters are housed in a modern complex in a newer part of town, I had the opportunity to visit this detective’s bureau in the old town of Zug. The area is full of narrow cobblestone streets with steep-gabled roofs and a charming eclectic variety of windows and exterior decorations. This is the view from his office window down towards the Zugersee, or ‘Lake Zug’. 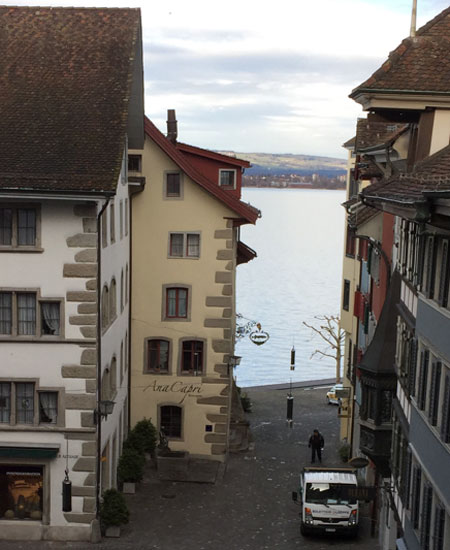 The famous Zytturm clock tower is the centrepiece of the town of Zug. Its tiled tower is designed in the colours of the canton of Zug’s blue and white striped flag. Zug sits amongst the lake-land area between the cities of Zürich and Lucerne in central Switzerland. The area is perhaps less known on the tourist trail, but is no less worthy of a visit for its culture, history, and the surrounding pre-alpine area leading to the more famous high Alps. 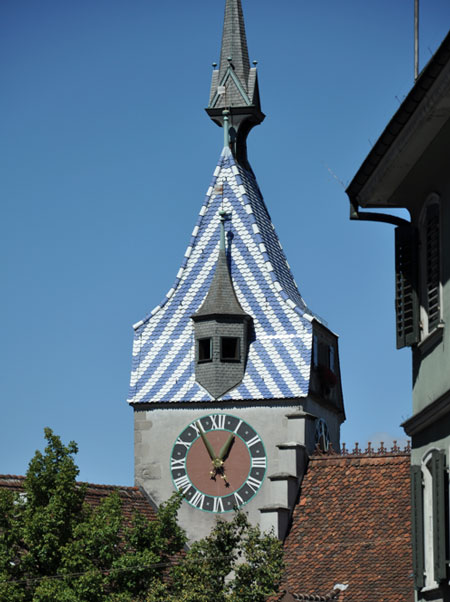