Netherlands – JESSIE BURTON – Enter the world of The Miniaturist

I’m meeting with the author of The Miniaturist today – Jessie Burton no less. To say that I’m excited is an understatement particularly since the invitation came in a rather unusual way… 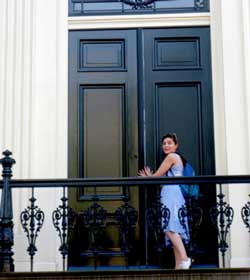 Jessie at the door of  Nella’s house! (C) Jessie Burton

I was sitting, reading, in Booktrail towers when I hear a thud on the carpet just inside the door. Not this is not so unusual since the postman has been known to post bookmail through. But when I went to see what book present I had received, I notice that it is lighter than most and is wrapped in smooth brown paper. Puzzled I look closer and see that there is a brown piece of string tied around it AND A PICTURE OF THE SUN ON IT. I gasp and out of shock almost drop the parcel in both excitement and as if it has suddenly grown very hot.

There is a sentence written around the sun in black letters – EVERY AUTHOR NEEDS TEA AND CAKE. I smile then for I know now what I will find in the parcel. It is still with trembling fingers how ever that I manage to untie the parcel full of expectation. And from the tissue paper inside, I take out several objects – a miniature Jessie Burton, a miniature booktrailer, some miniature cakes and two miniature cups of tea. There is another treasure in the parcel, tucked in a separate piece of paper and wrapped in a bubble wrap of sorts. This must be something more delicate than most I tell myself.

And it is, for when I open it, it is the smallest, most perfect vase of yellow tulips that I ever did see. On the back of the vase are the numbers 25.6.14 at 4pm. And then I know what I must do and for what I must prepare. These objects will be the architect of our very good fortune….

So , I set about recreating the scene that the author for the Miniaturist has set for me – I hope I have served her well….

So, you can imagine my excitement and nervousness when she  arrives! I know I have written quite a few booktrail posts on this book but it has inspired me and captured my imagination in such a way that I could not resist to write about it and spread the word. And now The Miniaturist is here herself. Aaaaah.

Hi Jessie, do  come in..the scene is all set out as you wish… 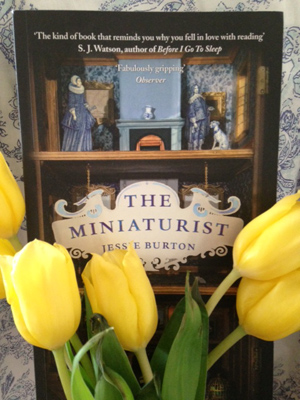 She smiles and after taking off her coat, sits down and says how lovely it all looks and that I have recreated the scene well. I have the eye of a Miniaturist she says.  I blush and remember my days spent making miniature monks out of plasticine (I have no idea why I used to do this when I was young, they were just easy to make and I had a lot of brown clay hehe) but I won’t tell her that, it would kill the mood.

Hi Jessie, pick a cake , pink or purple…she takes the pink one and I start with the chat….This must be one of the most magical blurbs on a book that I have ever read.

What was it about that dollhouse in the Rijksmuseum that inspired you so much? and about the art of the Miniaturist?

It inspired me for several reasons. Firstly, it’s a very beautiful decorative object, that has to be seen to be believed. Secondly, the fact it was an exact replica of a real house filled with pieces from around the world, was so fascinating. To me it was a reflection of the society its owner lived in, and posed interesting questions about her motive behind commissioning it in the first place. The miniatures inside it are works of art!

Miniaturists were real artists. Which object in your house or life would you like a miniature of to treasure?

Good question! Mmm. I’d like a miniature of my cat because then at least I’d be able to control her and know where she actually is half the time…

Petronella Oortman is  a real person so what were you careful to include in her story and what message did you want her to tell?

To be honest, I have altered the real Petronella’s autobiography. I have made her much younger than her husband for reasons of plot. I have also put her and her husband in a more expensive house, also for novelistic needs! I wanted Nella, as I think of her, to be the eyes and ears of the story. She comes to the city as an innocent, but full of spark and spirit that leads her on. She thinks she knows what is what. She doesn’t. That’s helpful as the writer, because you can insert ambiguity. She has to learn a lot of lessons about love and friendship, about betrayal and compromise.

What kind of research did you do in Amsterdam? What are your connections to the city?

I had no connections before I went on holiday there in 2009. I read social history and recipe books. I studied maps and paintings, and I traced the physical city with my footsteps to get a sense of it. (I love that last bit – she is a real life miniaturist booktrailer!!!)

Marin is another fascinating character. Was she based on anyone that you researched?

Not at all. She is a figment of my imagination. I did see one quite severe painting of a woman that reminded me of her, but actually Marin is softer in my mind than Nella takes her for.

The Golden Age in Amsterdam is a fascinating period of history. What interesting fact did you learn that you may not have included into the book?

Mmm. I think I crammed all the interesting things in that I could! I’m sure I must have jotted a few strange facts down that slipped through the net.

Hopefully people will find them for themselves.

I read that an actual version of the house and figures was made before being photographed for the cover? Have you been allowed to keep it?

This is true! A real Miniaturist made the front cover, which is quite extraordinary. I hope I get to keep it but that would be a long way off. We want as many people as possible to see it first.

I believe your next book is set in Spain this time. Can you tell us anything about it?

Well, it’s still in the impressionistic phase. Spain in 1937, London in 1967. A disgraced painter, a rebellious girl, one act of betrayal echoing on through time. Two women and a young man trying to find a foothold in a turbulent life.

Ooh perfect for another booktrail!

Thank you so much for stopping by today Jessie. What’s that you say? A gift? For me? I open the parcel she hands me slightly nervous that it will be another set of miniatures and wondering what challenge Jessie has set me this time…. but well it was a challenge but a different kind than what I had expected….Oh! lovely. Not sure what they will make of them when I go to Tesco…
Reader, I have to wear these out, in public. So when you see me, I will be the wobbly one that cannot walk upright. I’m off to practice now…Here Jessie you take these cup cakes back with you. (I got two extra hehe) Here take them quick, I might drop the, not too steady on my feet.

To deliver another parcel no doubt…