Not all detectives have just stepped off the screen from Line of Duty or Spooks. Some of the most seasoned and experienced detectives are to be found in novels.  You can read about modern and youngish detectives in many a good police procedural but what about the older police detectives and their view of a changing world?

There are a few examples of authors who use old or elderly detectives at the heart of a small town police force or even in a care home…..BUT we’re not going to mention them here. You haven’t met Bryant and May yet….. 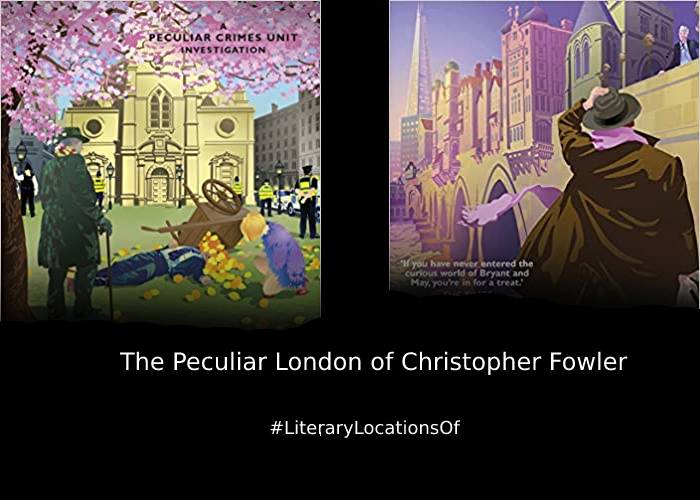 The books of Christopher Fowler

If it’s a series of two geriatric detectives who solve some of the most gripping and imaginative crimes in London, then it’s Christopher Fowler’s Bryant and May series  you need. In this series, London is a major character in the books – the history, the culture, the heritage and hidden secrets of this city are explored and enjoyed, played with and evoked with historical style. Each novel brings you a new view of the city, through the eyes of two detectives with more life experience, and therefore the jaded views and sarcasm to go with it, it’s Bryant and May you need.

Allow us then to show you the London of these two detectives with a difference.

Bryant and May  and the Peculiar team:

Arthur Bryant and John May are Golden Age Detectives in a modern world. They work in the Peculiar Crimes Unit which is specialist police team in the capital. IT was founded during the second world war to investigate cases that could cause national scandal or public unrest.

Bryant –  a technophobe and quite a character!

John May  – lives more in the modern world

Their team – a team of equally unusual misfits who are just as likely to commit crimes as solve them.

The books of Christopher Fowler 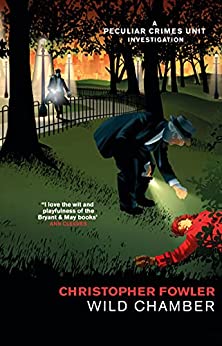 The London of Bryant and May

Where to start? All the books can be read as standalones but ‘On The Loose’ and ‘Off The Rails should really be read together

BookTrail the locations in Wild Chamber

What to discover? The PARKS of London

Save this novel for a nice day and let it take you around London’s major parks, the so-called Wild Chambers of the city. The trail goes around the parks and the comedy  flows thick and fast

RAYMOND LAND: If anyone else starts winding me up they’ll soon discover the less forgiving side of my nature. I can be a right Dr Jekyll when I have to.

BRYANT: You do know that Mr Hyde was the bad one?

This is all about the hidden spaces of a city, the gardens tucked way from view, the shadows of a city’s open spaces…… 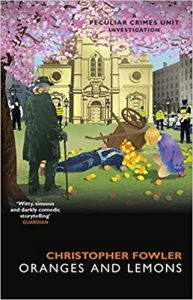 BookTrail locations in Oranges and Lemons

The part of the city to discover: The  churches of the capital

This is a particularly clever novel as it centres around all the churches in a classic nursery rhyme. So much history to come out of a few lines that most adults and children in England remember well. So, what better way than to do a booktrail of al the places mentioned here…

At the bustling heart of the city , we have the PCU unit – The peculiar crimes unit that solves the most unusual and disturbing crimes. 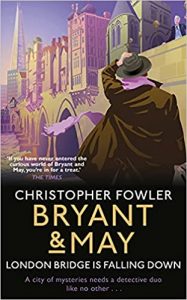 London Bridge (is falling down)

This  bridge gets a lot of attention in the novels and there are some very interesting facts to discover! 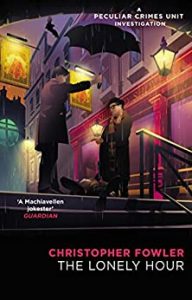 This lovely parkland in the centre of the city – well let’s just say you’ll never look at it in the same way again!

Some of the witty lines in this series:

BRYANT: Why do women always do that thing with you?

MAY: They sense my charisma.

You really need to get hold of this series. It’s fresh, funny and stands out against books with older detectives. The comedy, wit, sense of place and all that quirky history! 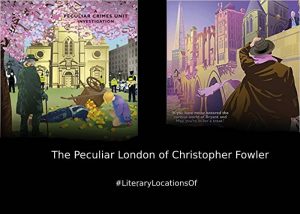 Bryant and May on the big screen would be a joy to behold. Who would play the central curmudgeons? I don’t know, but what I do know is that they themselves would probably not agree on who would play them….