Author Max Egremont is here to tell you about a very interesting book and journey within…. 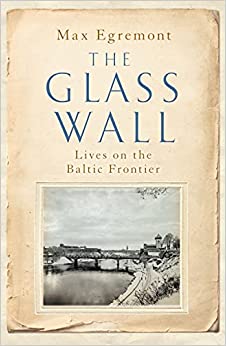 The eastern Baltic is a land of vanished power.  Ghosts of conquerors and victims still haunt the forests, the long sandy coasts and the historic towns and cities, as I found when I began travelling there at the start of the 1990s.  The Soviet Union was breaking up then and countries that hadn’t been independent for years suddenly found themselves cut loose from its vast empire. 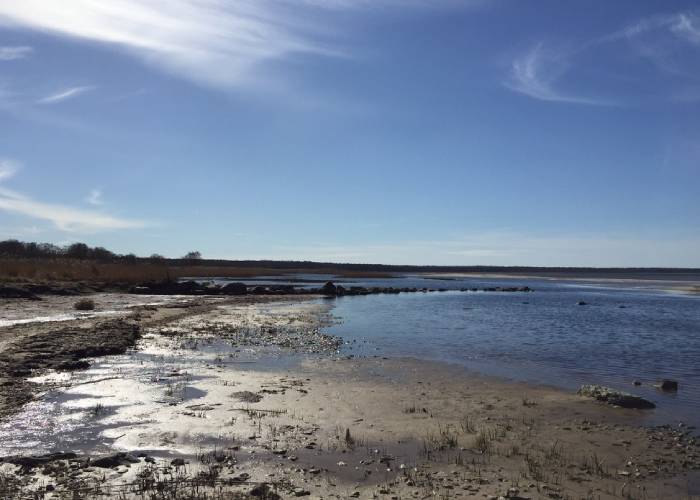 I began in the Polish city of Gdansk, went on to Vilnius in Lithuania, to Riga in Latvia and then to the Russian city of Kaliningrad, until 1945 the German or Prussian Königsberg.  These tragic and beautiful places on Europe’s eastern edge soon had me in their grip: so much so that I’ve written two books about them. 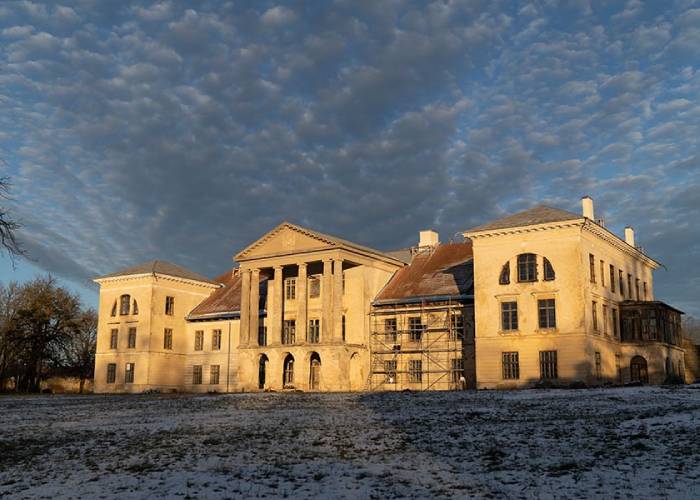 Away from the cities, the train or bus goes through empty landscapes, across huge forests and soft meadows, past the ruins of crusader castles or abandoned palaces or sharply evocative manor houses such as Kolk and Palmse in Estonia or Rundale and Jelgava in Latvia.  There are small medieval churches of intimate beauty. 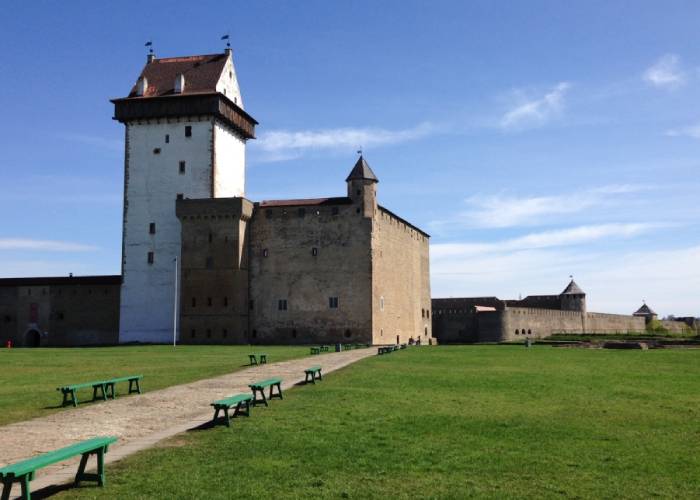 You reach Narva, the Estonian town across the river from the Russian Ivangorod, largely rebuilt after the terrible battles there at the end of the Second World War.  Here two castles – Russian and Estonian – face each other in symbolic confrontation, on opposite banks, dividing the west from what Erasmus called “barbarian Russia”. 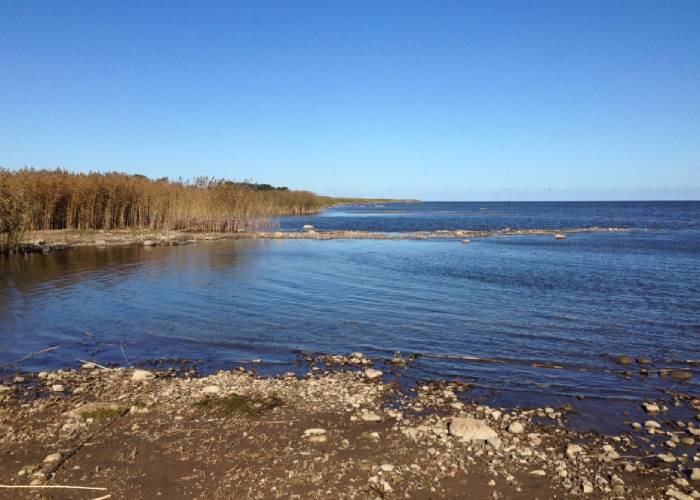 South from Narva is Lake Peipsi where in the winter of 1242, at the battle on the ice, the Russian Prince Alexander Nevsky’s army defeated the Teutonic Knights, thus stopping the eastward spread of western (as opposed to Orthodox) Christianity.  A sense of threat has endured for centuries.  Will Putin send his tanks across into land that was Soviet until 1991?

But who were the barbarians here?  Terror came from both sides of often shifting borders, the many languages showing incomers and the indigenous inhabitants: Polish, German, Russian, Swedish, Danish, Finnish, Lithuanian, Latvian, Estonian, Yiddish, Hebrew.  Religion was a vital force.  Today Orthodox and Lutheran and Roman Catholic churches jostle for pre-eminence; few synagogues remain since the murderous destruction brought by the Holocaust although the region once had a large Jewish population. 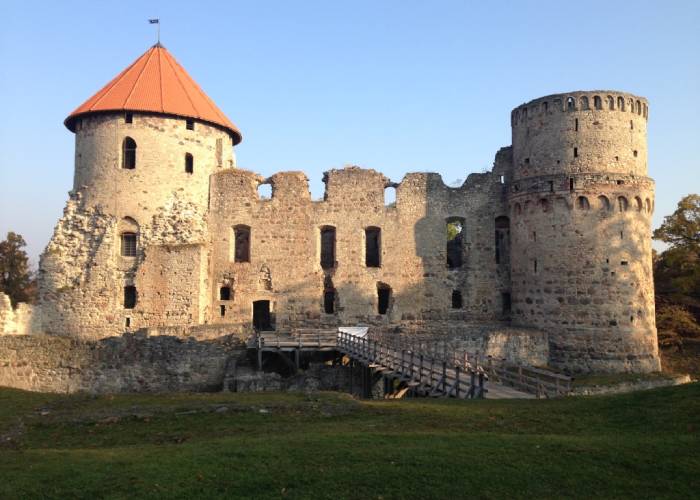 Trade and conquest, faith and conversion, have brought violence and terror to the eastern Baltic. Indigenous people – Estonians, Latvians, the original Prussians – were swept into new feudal subservience under German or Scandinavian or Russian or Polish or Swedish conquerors.  The Russian poet Josef Brodsky thought that Kaliningrad’s trees near the former Lutheran cathedral or the tomb of the philosopher Immanuel Kant still whisper in German, recalling the city’s identity until 1945 as the Prussian Königsberg. The centre of Riga, capital of Latvia, founded in the thirteenth century by missionaries and clerics from Bremen, still has a distinctively German feel.

Germany and Russia, the two arbiters of modern Europe, fought across these lands, shaping their beauty and their nightmares.  But the turmoil began with the northern crusades in the thirteenth century, continuing through the seventeenth century occupation by Sweden and, from the start of the eighteenth century, imperial Russia.  Names changed: the Prussian Danzig became the Polish Gdansk, Königsberg transformed into the Russian Kaliningrad, the Russian Reval into the Estonian Tallinn, the German Mitau into the Latvian Jelgava, the Russian Helsingfors into the Finnish Helsinki.

It’s not surprising that the eastern Baltic has many ghost stories – of mysterious figures that flit along empty moonlit coasts, of pale faces seen at castle windows before a Baron’s death, of victims of gypsy curses or peasants’ visions of landlords in hell. These seem to show a consoling hope that life and revenge can outlast terror: that souls survive conquest or suffering. 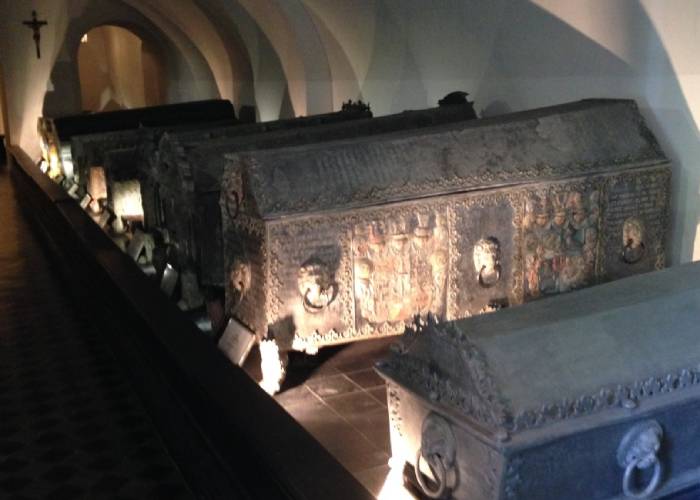 An eighteenth-century General, the Duke of Croÿ, was taken prisoner during the war between Russia and Sweden and died in Tallinn in 1702 after a period of drunken decline.  Buried in the church of St Nicholas, the corpse was revealed soon afterwards when vandals broke into the coffin. There they found the dead Duke remarkably preserved by the icy stone and perhaps his unusually high alcohol content.  For more than 190 years (until rot set in), he was a tourist attraction. The body was dressed in costumes brought in from a nearby theatre. Some visitors even believed that the mummified body of this dissolute alcoholic had divine powers.

The quest for belief, to find something above the terror – is understandable.  One of the Russian Emperor Peter the Great’s Generals reported during the war between Russia and Sweden in the early eighteenth century that not a living thing was standing between Tallinn and the Russian border.  The battles were followed by a series of deadly plagues.

Perhaps the dead, having endured such hardship, leave a greater presence than that left by comfortable lives.  Tallinn, the Estonian capital is a spectacular city looming above the Baltic. On winter nights, there’s only a few hurrying pedestrians loom out of the thin mist and narrow, snow-strewn alleys.  Couldn’t this scene have taken place centuries ago? The heavy, shapeless winter clothes and muffled features, the scurrying footsteps that defy contact, seem to hide contemporary identity, giving a sense of a still-living past.