Tuscany travels to see a Contessa with Dinah Jefferies

The author who paints her words as well as writes them. Dinah has taken readers to India, various parts of Asia and to many other places besides. This latest book sees her evoking Tuscany in the most wonderful of ways. 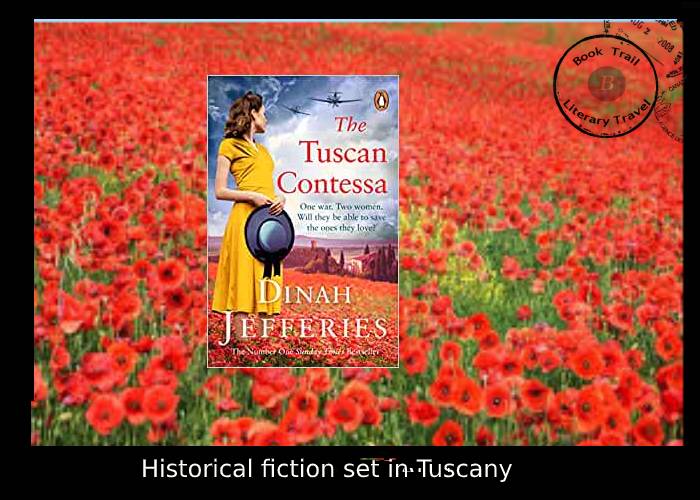 I went on four trips to Tuscany, including one just to Florence, where some dramatic and dangerous scenes in The Tuscan Contessa take place. We stayed in a Palazzo by the river which inspired my character Sofia’s de Corsi’s own Florentine home. Although I lived in Tuscany in 1967, I hadn’t been back until 2018 and 2019.

I wanted my setting to be a beautiful, isolated, and self-contained community where, at first, the villagers might imagine that the Second World War had passed them by. The truth would turn out to be different, of course, and while The Tuscan Contessa is a moving story of two women who try to save the ones they love against incredibly odds, it is also a testament to the bravery of the ordinary people. The capacity to survive and the unconquerable power of the human spirit is a major theme in the book, and nowhere was this more evident than in Tuscany during WW2. 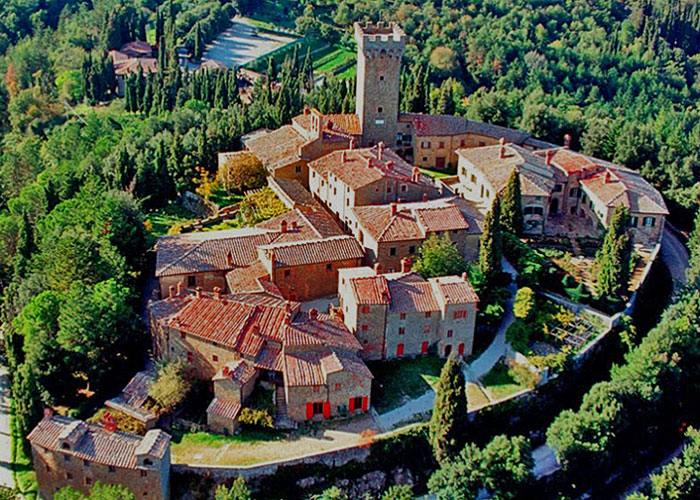 My Contessa’s village the Castello de’ Corsi was based on the Castello di Gargonza situated a few miles outside Monte San Savino in the Province of Arezzo. You turn off the road towards Siena and follow a winding narrow track through the forest until this walled village appears in front of you. Exactly as it is in my book, there’s one single archway into the village. This village was once home to the 110 people who served the network of farms belonging to the estate.

As I entered, I felt as if I’d been transported into the past. I was there in November, when the early morning mists enveloping the ancient walls added to the already seductive atmosphere. But once the sun burnt off the mist, the views were captivating. Looming over the small square an ancient tower is set into the buttressed walls – the tower of my story which plays such an important role in my book. 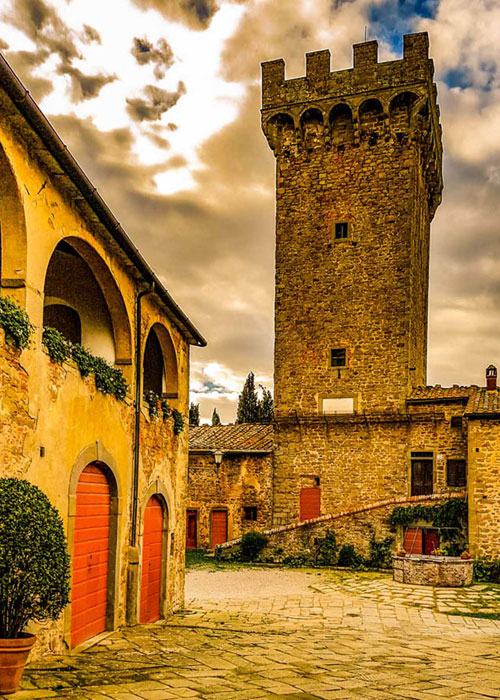 The Tower in the book

By the early 1970s the village had been deserted and became one of Italy’s ghost towns but the present owner’s father, Count Roberto Guicciardini Corsi Salviati, made it his ambition to restore the village. Now, although it looks like a normal village, the whole place is a Hotel with a wonderful restaurant where their own olive oil is used, and where fresh truffles gathered in the morning are used in a dish of wild boar ragu with handmade tagliatelle.

If you’d like to read more about this unique, inspirational place and see photos 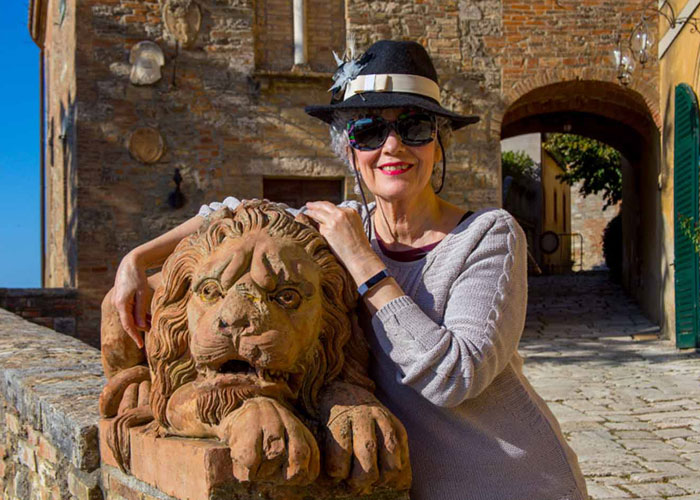 My next stop was Lucignano d’Asso. I fell in love with this little hamlet and it became the inspiration for the location of my fictional village overlooking rolling hills and surrounded by cypress trees. So, although my village in The Tuscan Contessa was based on Gargonza, I moved its actual location here. I first came across this place on a trip out from Montalcino when the valley beyond Lucignano was wreathed in mists.  I just had to return in May when all the Spring flowers were blooming. We stayed in what had been a village house, now transformed into a holiday rental. Like Gargonza many of the houses are now part of the hotel  – one of the most magical places I’ve ever stayed. 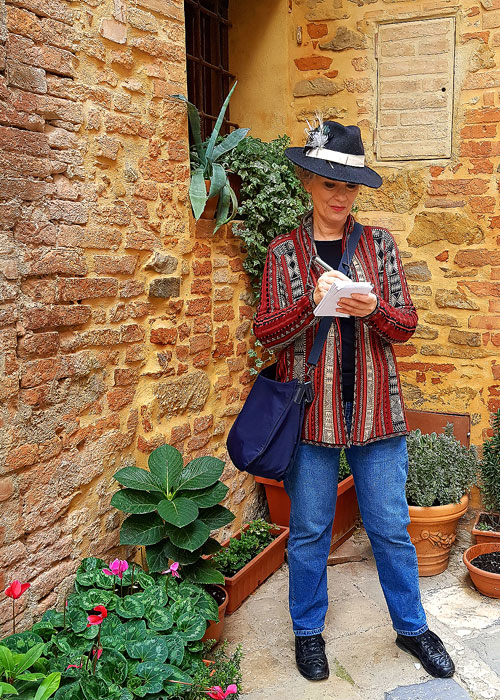 Buonconvento is a marvellous red-brick medieval town less than 30 miles away, so I settled on this as a larger town in the book. It’s gorgeous, and bursting with moody atmosphere. Perfect for one of the most life changing and dramatic scenes in the book. 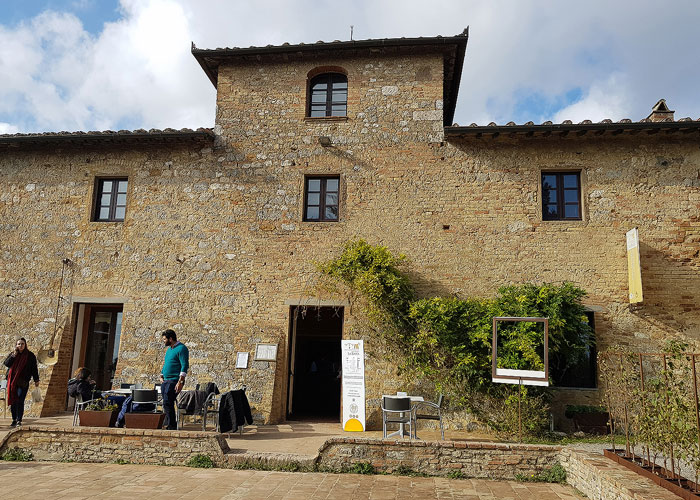 On our way back to Pisa we stayed in San Gimignano. The tower in the first chapter of the Tuscan Contessa was also inspired by the months I spent as an au pair looking after two children at La Rocca in San Gimignano, long before the town became the tourist destination it is today. Its towers haunted me, and I couldn’t help imagining how terrible it would be to fall from one. So, the seed for The Tuscan Contessa was sown years ago. It just took a long time to come to fruition!

If you’re interested in reading more about what happened in Tuscany during WW2 there’s a list of books I read at the back of The Tuscan Contessa.

thank you Dinah. What a marvellous guided tour of your novel!