Travel to Spain and Her Last Promise – Kathryn Hughes

Travel to Spain with Kathryn Hughes

You always know you’re going to get a good story with Kathryn Hughes. She blends fact, fiction and heart and soul in to her reads and this latest novel is no different. It’s a story of secrets, an emotional journey to Spain and has a very unique premise. Wait til you hear where she first got the idea of the novel! 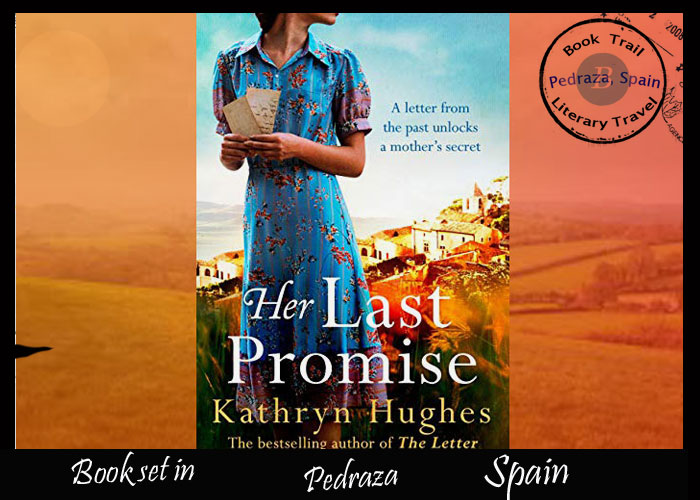 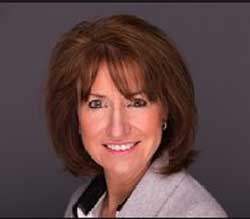 Your story of secrets is very emotional.  Was it emotional to write?

Thank you for saying that.  It’s very important to me to write something that resonates with people and stirs their emotions and readers will only feel that if they care about the characters.  Obviously, I get very close to the characters and sometimes it is difficult to present them with such challenging circumstances. It can feel a bit mean when I’ve grown to love them so much.  There is one scene in Her Last Promise which gets me every time and I end up reaching for the tissues.  I feel a bit daft because I’ll be sitting alone in my office, crying over something I’ve made up!

You really highlight the lovely location of Pedraza. I believe you found it on a holiday?

Yes, indeed, on a family cycling holiday in 2017 in central Spain.  It was a self-guided tour, cycling around 30 miles a day along unforgiving terrain under a blistering sun.  The kids were thrilled! Our trip began in the historical city of Segovia, in itself a worthy destination for a weekend as it boasts a staggering Roman Aqueduct, a Gothic Cathedral and the Alcazar, originally built as a fortress. We wished we could have stayed there longer but we had an itinerary to adhere to and so it was our bikes were delivered to our hotel the next morning. It was on the fourth night of our holiday that we arrived in the tiny medieval hill-top village of Pedraza.  The term ‘magical’ is bandied about far too often but in this instance the village truly lives up to this moniker. 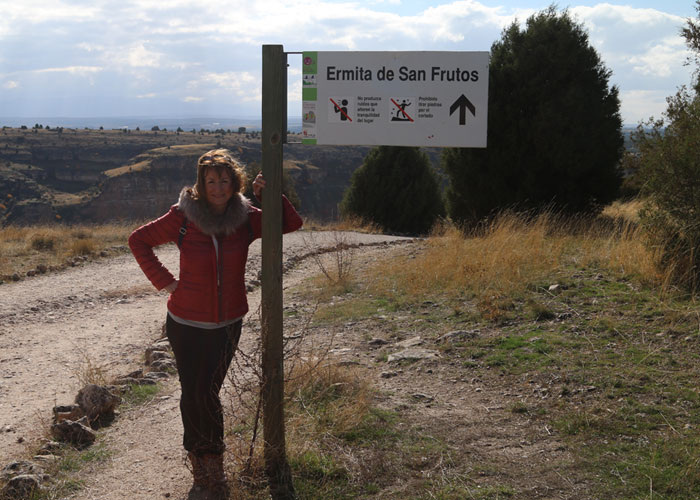 What enchanted you about this place?

I think if we had arrived in Pedraza say, a century ago, it would not have looked much different.  The town is perched on a hill, surrounded by a wall, the cobblestone streets full of biscuit-coloured houses, their window boxes abundant with red geraniums.  High up on the bell tower, storks make their nests and the overwhelming atmosphere is one of calm and serenity. 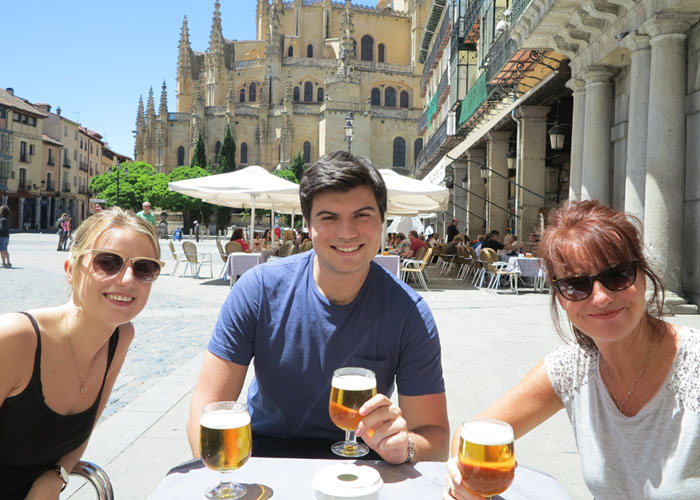 Where do you recommend readers go if they visit there?

First of all, it’s tiny, so you can see it all in a day and just strolling around the streets, admiring the vastness of the countryside around may even be enough.  However, there is the 13th century prison where it’s still possible to see the remains of the dungeon, the stocks and the jailer’s quarters. The Plaza Mayor, the heart of the town, is made from remnants of demolished buildings.  Despite being designed by nobody, it is regarded as one of the most beautiful in Spain, it’s ramshackle qualities only adding to its allure. There is also a Romanesque church and a castle providing unparalleled views of the valley and the distant mountains. 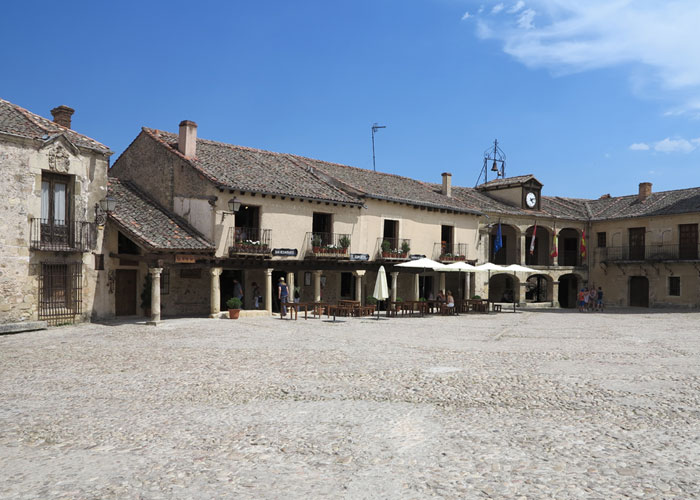 Any stories about food to eat there?

The suckling pig is a speciality and absolutely delicious.  I gave up meat in January 2018 and can honestly say I do not miss it, but that dish has lived long in the memory. 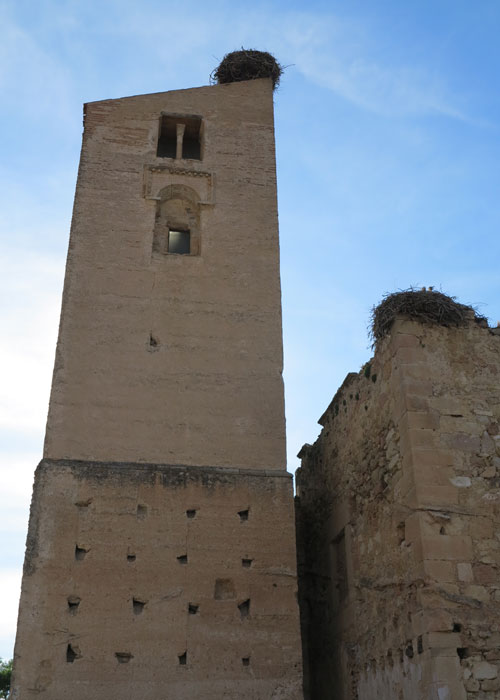 How did you research your monastery?

The inspiration for my fictional monastery, Monasterio de Justina, came from a detour we made to the Hermitage of San Frutos, which stands on a peninsula high above the River Duraton.  Although technically not a monastery, it is completely isolated and cut off from civilisation.  In creating Monasterio de Justina, I drew on the atmosphere of this hermitage, plus a mountain of reading about the various orders such as the Benedictines and Carthusians. 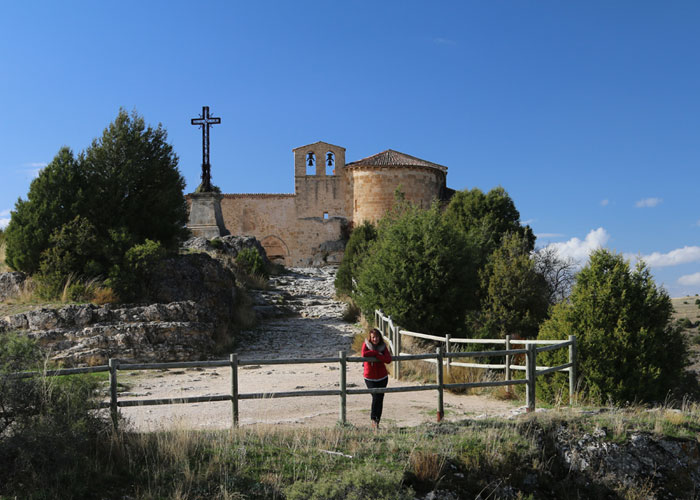 You evoke the setting well. How do you research to get your location to come alive on paper?

By visiting the places and immersing myself in the sights, sounds, tastes, the atmosphere, interaction with locals and generally absorbing as much as I can.  You can read about a location endlessly but there is no substitute for first-hand experience.  I went to Segovia and Pedraza twice, once in the summer and once in the winter. 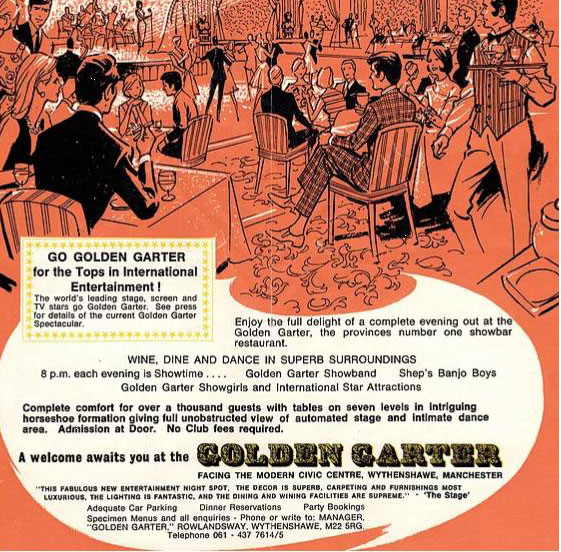 Your other location is Manchester and The Amethyst Club.  This was an iconic place in real life wasn’t it?

All my books are partly set in my home city of Manchester. It’s a wonderful place but then I would say that! Anybody who grew up around here will no doubt remember The Golden Garter in Wythenshawe.  It’s now a Gala Bingo, but in its heyday, The Garter, was the ultimate night out.  On its opening night in October 1968, Bruce Forsyth topped the bill! You could enjoy a three-course meal, which would set you back fifteen shillings (or seventy-five pence for people who’ve no idea what I’m talking about) whilst watching the show.  The room held fourteen hundred guests and played host to such stellar names as Dusty Springfield, Norman Wisdom, Eartha Kitt, Lulu, Bob Monkhouse, Tommy Cooper, Olivia Newton John and The Bee Gees. The final show took place on 27th December 1982 with a performance from The Fortunes.

How do you feel about history and secrets across destinations and time?

Some authors hate it, but for me the research is the part I enjoy the most in the whole book-writing process.  It’s an education even though only a tiny part of what I’ve learned will end up in the book. I enjoy writing a dual-time frame and bringing together the two stories in an unexpected (hopefully) and rewarding way. 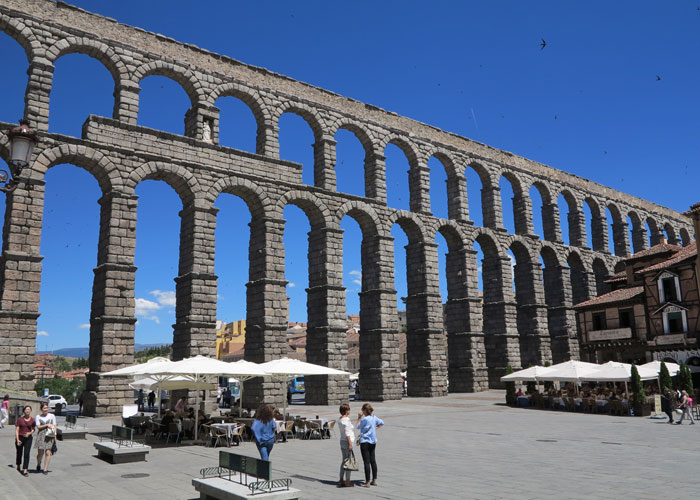 In a converted garage in the garden.  I have internet access in there, but no phone signal so I can work without distractions.  That’s the idea anyway, but with no toilet or kettle in there, I do make frequent visits to the house where all manner of distractions await!

Unless I am on holiday, I only read in bed at night.

And the last word for Tara.  How would she feel about readers visiting her place?

I think she would be delighted, although when you discover such a serene, unspoilt place, it’s tempting to stay quiet about it in order to keep it that way!

Thank you so much Kathryn for a wonderful tour of your novel’s settings!