When you’re navigating the streets of Old Shanghai, you need a guide who can evoke the time and place so well in his novels, he can really take you there. Paul French on the BookTrail today with pictures and a very interesting tour….

This really is an all inclusive BookTrail! 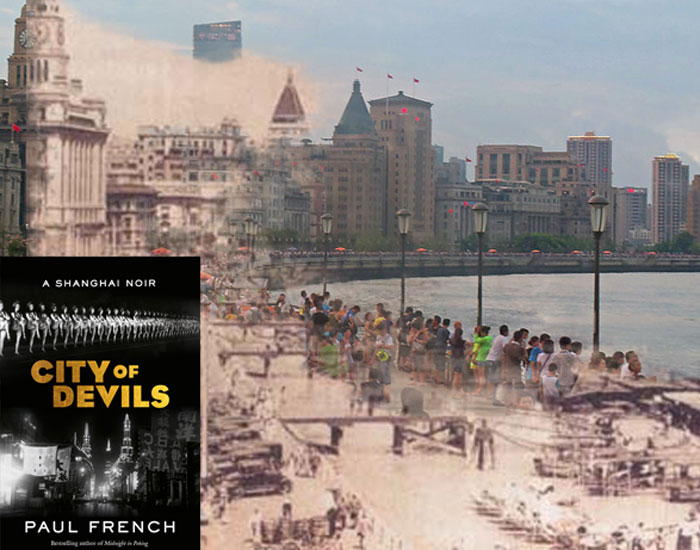 The characters in City of Devils: A Shanghai Noir move all across the city – from what used to be the French Concession, the central portion of the old International Settlement and north of the Suzhou Creek, to the more Chinese and working-class districts of Hongkew, Yangpu and Paoshan. Those old demarcations of the foreign concessions are long gone now.

Shanghai in 1932 showing the foreign concessions. They are gone now and today’s Yanan Road marks the old division between the Internaitonal Settlment and the French Concession)

In the 1930s, Shanghai was the world’s fourth biggest city with nearly four million people; now it’s perhaps the second largest city in the world with around 24 million people (nobody is quite sure what the total population is!!). We can only cover a slice of it here so let’s walk some of its most historic and most impressive streets. 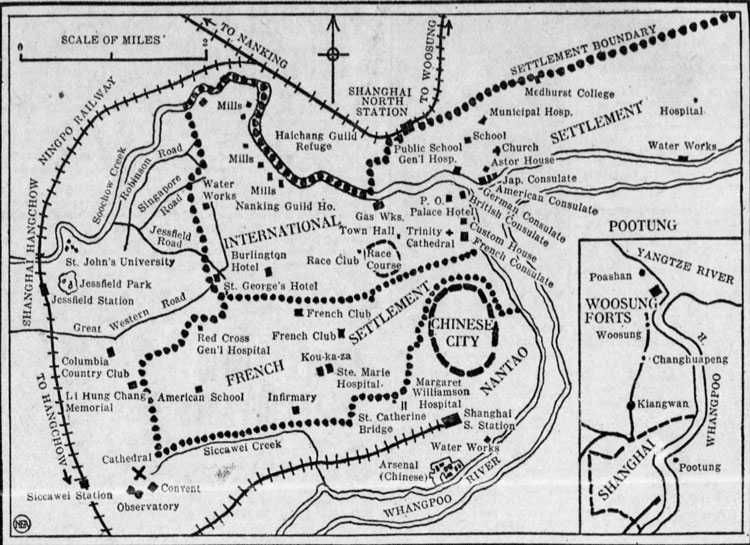 If Shanghai has a centre then it’s along the Bund (now Zhongshan Road or, to the locals, Waitan), the magnificent art-deco waterfront that once looked across the Huangpu River to the low-level warehouses of Pudong, but now faces a skyline that looks like Manhattan and Hong Kong combined and reaches higher than both of them. But the Bund (simply a Hindi word meaning raised waterfront and rhyming with “shunned”) is still impressive. Walk it from south to north starting at the junction with the wide Yan’an Road. Head past the old Shanghai Club (No.2 Bund) where the foreign elite used to drink at the aptly named Long Bar (it was the longest bar in the world). Further along is the old HSBC building (No.12) where you can step in and gaze at the original ceiling mosaics. Next door is the Customs House (No.13) whose dome still resonates every hour on the hour (if you listen very carefully) to the Maoist classic The East is Red, the tune now invariably lost in the cacophony of traffic below. The Cathay Hotel’s glorious art-deco lobby is worth a look (no.20) as are the former British Consulate buildings (No.33). 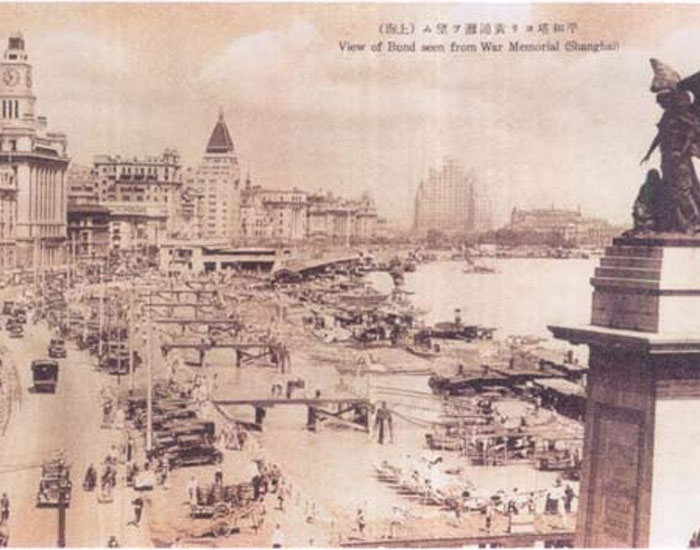 (The skyline of the Bund is little changed since the 1930s, though the war memorial at far right above was removed during the Japanese occupation. Now the waterfront has been raised to form the Bund waterfront walkway) 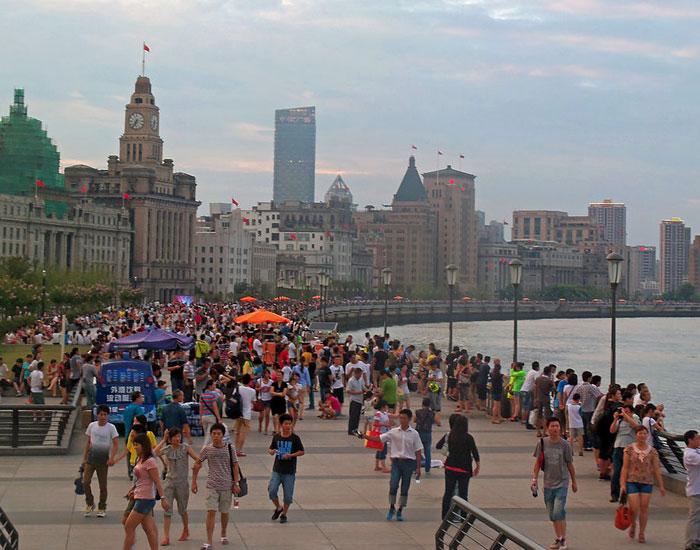 Cross the Garden Bridge over the Suzhou Creek, remembering that at the time of City of Devils this bridge was a barricade with British soldiers at the Bund end and Japanese soldiers at the Hongkou end. It was a narrow funnel for tens of thousands of ordinary Chinese flooding in from the Japanese-invaded portions of the city to the safety of the foreign settlement. Across the bridge to your left is the glorious art-deco Broadway Mansions (20 North Suzhou Road), built in 1934 and one of the most luxurious apartment buildings in the city. To the right, across the street, is the old Astor House Hotel (15 Huangpu Road). It’s currently shut for renovations, but there’s been a hotel there since 1846 and it’s been home, at least for a night or three, to such luminaries as Albert Einstein, the playwright Eugene O’Neill (who had a breakdown in his room), Mao’s second-in-command Zhou En-lai (in disguise and on the run from the police) and Charlie Chaplin. Opposite the Astor House is the Consulate of the Russian Federation – the only consulate in Shanghai to remain in the same location since before 1949 and to have also been the Tsarist Russian Consulate and the Consulate of the Soviet Union before. 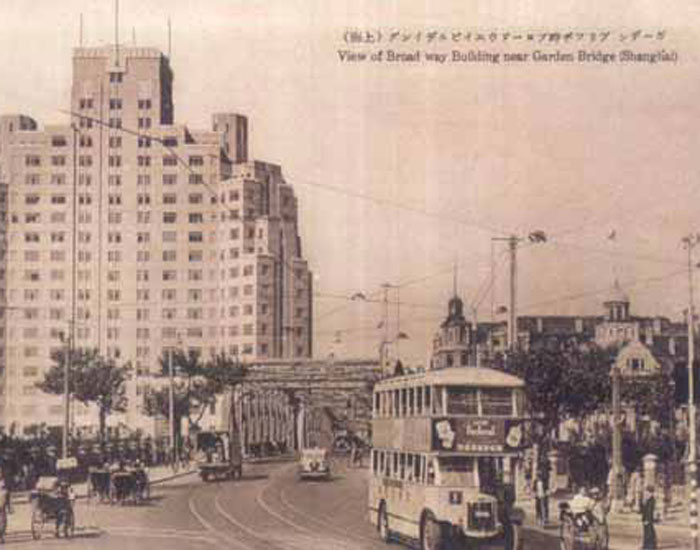 4/5 The metal Garden Bridge across from the Bund to Hongkou District still remains and the art-deco Broadway Mansions. To the right the white building in the foreground is the Russian Consulate and behind it is the Astor House Hotel) 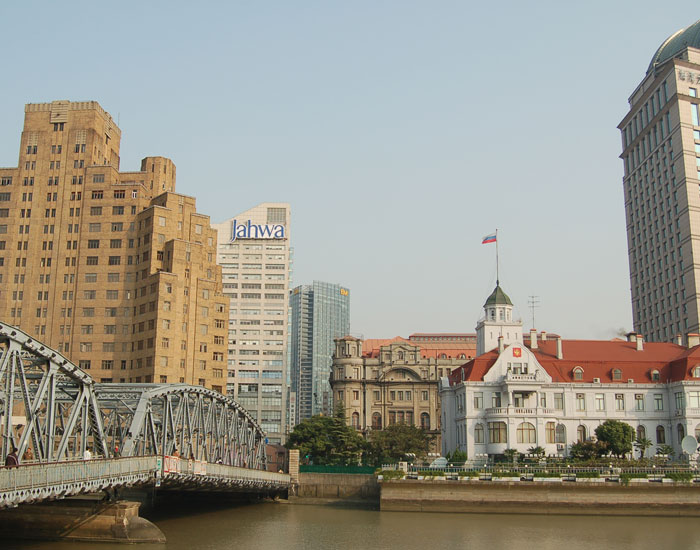 Walk along the northern bank of the Suzhou Creek (on the North Suzhou Road) remembering that this now quite clean waterway was once fetid and crowded with sampans and the families that lived on them. At the Sichuan Road Bridge you’ll come to the impressive International Post Office (395 Tiandong Road), which is still a working post office. A little further along is the enormous modernist Embankment Building, built by the multi-millionaire and Shanghai legend Sir Victor Sassoon. 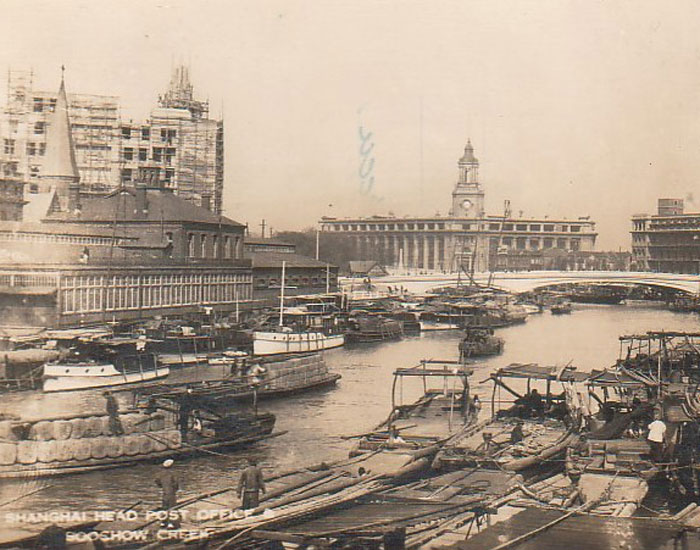 (6/7 – The Suzhou Creek is far less crowded and polluted today than it was in the 1920s. The Sichuan Road Bridge remains as does the tall spire of the International Post Office. We know the top picture is from around 1927 as the post office was built in 1924 but the almost completed spire surrounded by scaffolding on the left is that of the Capitol Cinema, completed in 1928, and, as the bottom photo shows, still there) 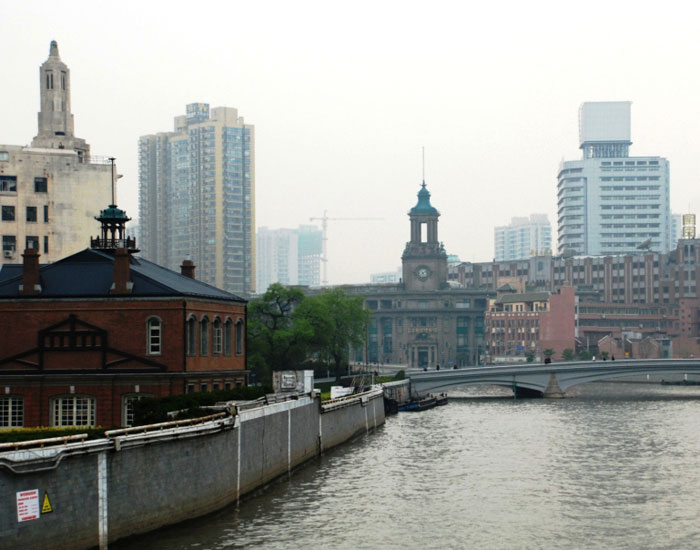 Cross over the Creek and wander back down the southern bank (South Suzhou Road) towards the Bund and the Huangpu River. On your right you’ll see Jiangxi Road. Take a walk down the road reminding yourself that in the first half of the twentieth century this street was called Kiangse Road and known by everyone in the city as “The Line”. It was home to the most sumptuous foreign-run bordellos in Shanghai that offered “American Girls” exclusively. Today it’s crowded apartments, small shops and youth hostels- but if those rooms could speak!!

In this last image, a detail from a 1937 map for tourists to Shanghai showing Kiangse/Jiangxi Road and warning you of what might happen if you venture along it! 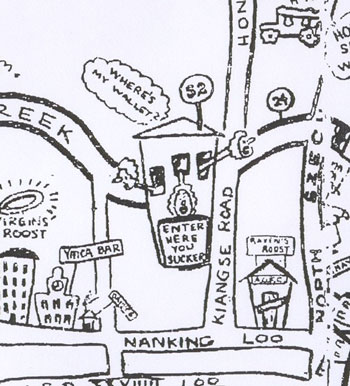 Continue along Jiangxi Road till Guangdong Road, turn left back down towards the Bund once more and you’ll arrive back where you started.

Wow! A BookTrail and a half that one! Thank you SO MUCH Paul for this highly impressive and detailed trail. And it’s off to Shanghai I go…