To say we’re a little nervous today is an understatement. We are sitting in an empty room with barely a stick of furniture in it except a small table and two chairs. There is an old violin lying on the table, its bow propped beside the chair nearest to us. To the right of us and dominating the room is a fireplace that is in desperate need of a clean…..and the thought of this frightens us. 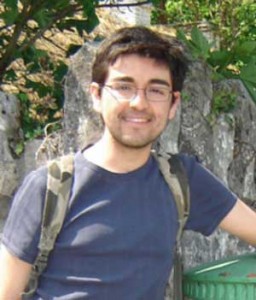 The room is silent – this dark, wooden floored room in the darkest house in Edinburgh that we’ve ever seen. Glad there’s two of us otherwise I know I would be out of here by now. This is the setting of Oscar de Muriel’s novel The Strings of Murder, about murder, intrigue and supernatural goings on.

That violin catches my eye again and a shiver whistles down my spine..

It’s then that I hear the music…softly at first but its rising tone distinctive. A haunting melody played on…oh ho…a violin and the music is getting closer and closer.. I shoot a look at the table and the violin is still there…but where is the bow?

There is now the sound of beating – but I realise it’s my heart measuring the extent of my anguish…for the violin music is getting louder…closer….so close…it’s as if it’s in the room with us…..

And then the door opens and Oscar de Muriel is standing outside grinning away with a violin in his hand. oooh if there was anything in this room to throw I would have done  😉

If you’ve read the book The Strings of Murder, then this scene setting will explain how much we were engrossed in this book and how when Oscar invited us to Edinburgh, we jumped at the chance….literally as it turned out!

(We allow Oscar to sit down and get comfortable. He’s brought  Scottish shortbread and tea with him so we’ll forgive him for the scare)

Edinburgh is a strong character in your novel. What made you set it there?

Very early on (and I mean within minutes of coming up with the main premise) I decided I didn’t want to set the story in London – as much as I like the capital, I think it’s been overused in Victorian fiction. My mind immediately went to Edinburgh. I love that city. I’ve been there a million times and whenever I visit I don’t want to leave. Besides its great atmosphere and history, it justified all the English vs Scottish humour I just love to write.

You’ve really nailed the English Scottish banter between the two policemen! It’s very funny indeed. When you first visited Scotland did this or the accents not faze you at all?

Not at all. Something about the UK I find fascinating is how you can travel 10 miles and encounter completely different accents and dialects. Frey may have slandered the Scottish speech, but as a former musician I love how rich and resonant it is. 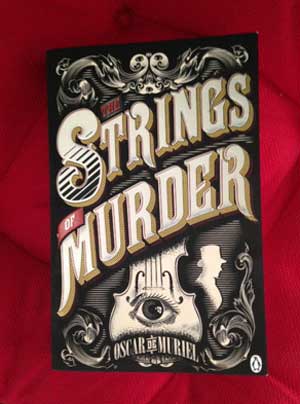 Which Scottish food do you like and which will you not try? ( there was  a funny quote to haggis in the book so we wonder if this will come up…..)

First thing that comes to mind is raspberries in a boozy cranachan.

Being Mexican, people are always surprised when I tell them I really like British food. I must admit haggis was a bit of a dare, though. In Mexico we have a similar dish (moronga) but, at least to me, haggis beats it every time, with the oats and all the spices. I wish I could put an addendum in the book: Frey is a fussy upper-class snub and he of course hates haggis, but that’s just him!

The violin is a mysterious instrument in this story. What are your own experiences of the violin? We know you play but why did you decide to involve this in your novel?

Being a musician myself helped a lot. There are parts of the book I think only a violin player could have come up with, like getting a rash on your neck when you play for too long!

I’d had this idea in the back of my head for nearly ten years. My violin teacher told me the legend around Tartini and his Devil’s Trill Sonata, and I always wanted to weave that into a story. I never found the chance until I needed a first case for Frey and McGray. It simply belonged there.

Will you set a novel in Mexico at some point?

I have several ideas and two finished drafts in Spanish. Mexico has a very rich history and there are several periods I’d like to explore. The 19th century was particularly interesting, and Mexico interacted with the rest of the world in fascinating ways. 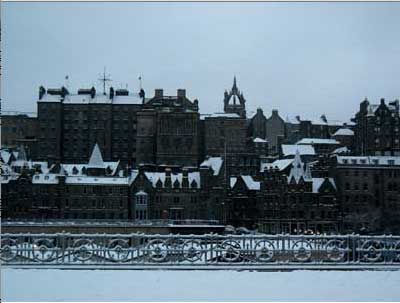 Did you find something out about Edinburgh in your research that surprised you?

The main surprise was how little the city has changed (layout wise) across the centuries. You can pick up a map from the 1880s and quite happily find your way. That happened to me when I jumped onto the aforementioned bus to Morningside, a few years ago.

Will we be returning to Edinburgh with Frey very soon?

Yes! I’m working on the finishing touches of the second book. It will be released early 2016 and the plan is to have a new adventure every year. I will not only explore Edinburgh though; there will be trips to Lancashire, the Highlands and London. I’m really looking forward to do that writing.

Where is your favourite place in the city?

Hard to pick, but I’d probably go for Arthur’s Seat. How many wild mounts can you find in the middle of a bustling city?

Ah Oscar it’s been a grand chat but this place still makes me nervous. Can we go outside now? I need to leave this place

So with that we’re off… Oscar leading the way….but as soon as I go to close the door, I hear an enormous whoosh – the fireplace has emitted a hazy fog, filling the room. Coughing and screaming, we exit the house in a hurry. Oscar and his violin are nowhere to be seen…