Johana Gustawsson takes us on a very special journey today – the story behind Block 46, the stunning thriller that you need to read. It’s very popular in the author’s native France and quite rightly so. So a chat today is going to take us into that novel  – and via a fascinating journey of languages too.. 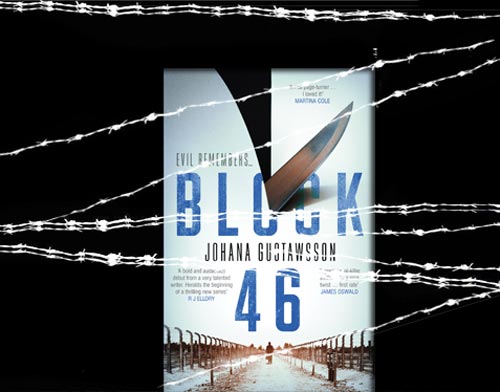 BOOKTRAIL the locations of Block 46 here

Block 46 a journey in many ways

In Block 46, there are three places that I will take you to: London and mostly the North West, where stands Hampstead Heath; the Swedish west coast and most particularly Falkenberg, a picturesque beach town, and then we will travel in time to Germany in 1944, in the Thuringia region, to Buchenwald concentration camp.

Block 46 is quite a personal story….

My paternal grandfather’s story inspired me for Block 46: in 1943, he was deported to Buchenwald concentration camp, where he stayed till its liberation, in April 1945. His deportation was always a sensitive matter to discuss with us, his family, despite the fact that he was giving talks in high schools and conferences about those dark years. It took years for my dad to talk freely about it… 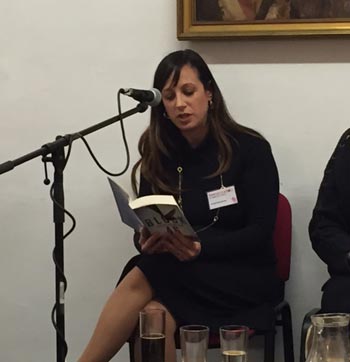 Block 46 was a very cathartic experience, not only for me, but also for my father. By revisiting the atrocities my granddad had to face during those years, we came to understand why he could not be a loving father or grandfather; this inhumane experience broke him and just left space for the hero he was.

The book has had huge success in France – no surprise! – It’s going to be huge here wait till everyone reads it! Do you enjoy reading French Noir and Swedish Noir?

Oh thank you! So kind of you to say that!

I do enjoy reading French Noir and Swedish Noir, but I have to admit that I have always been more attracted to Scandinavian Noir as the change of scenery is total, and I love traveling and diving into different cultures whilst reading.

You have a very interesting background you’re French but married to a Swede living in London? Which language do you speak at home?

I speak English with my husband and French to my little one; our family gatherings are quite something, as you can hear a mix of Swedish, French, English and Spanish. But I have to confess that if I dream in French, when I get mad, I swear in Spanish!

Henning Mankell, The King of Swedish Noir, who sadly passed away almost two years ago. His inspector, Kurt Wallander is a formidable character.

Charles Exbrayat who was a very talented crime writer; his novels are very humoristic, as you can imagine when you know that his books had titles like “Chewing-gum and Spaghetti” or “Chianti and Coca-Cola”!

I enjoy Beck very much, inspired from the character created by the famous Sjöwall and Walhöö, Swedish writers who revolutionized the Swedish and Scandinavian crime genre in the sixties and seventies. 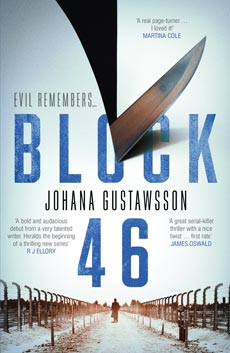 Block 46 is definitely French Noir. I know that I make you travel between London, the Swedish west coast and Germany in the forties, but despite this very European scenery, my voice is indisputably French!

Do you read books in all three languages?

I read books in French, English and Spanish, but I really need to improve my Swedish before doing so! Indeed, translation can totally change the musicality of a novel and that is why the work of a translator is such a difficult and precise one: it’s a work of art.

You have a little boy and are expecting twins – what kinds of stories does your son love to read? Kirikou for example?

Maximilian loves Kirikou! We read him quite a lot of different things: he is fascinated by the solar system and planes, so everything we can find about it, we read it to him and I just began to introduce the classic Grimm and Perrault tales. My husband read to him typical Swedish tales which are Alfons Åberg, Bamse and, of course, the Astrid Lindgren tales.

I’ll be reading the classic tales from Perrault, the brothers Grimm and Andersen, and also from the mythologies, Nordic and Greek, which teach us so much about our cultures.

“Janssons frestelse”, which means literally “Jansson’s temptation”. It is a Swedish typical dish made of potatoes, cream, sprats and onions. The first time I was introduced to it, I have to admit I made fun of it saying arrogantly to my husband that Swedes badly imitated the French gratin dauphinois adding sprats to try to get the taste of our succulent dish. Yes, I know, not my proudest moment… But when I tasted it, I had to admit it was delicious!

Well coming back to the inimitable gratin Dauphinois, which is a casserole made with potatoes and crème fraîche, to die for! Serve it with a fillet steak, his Roquefort sauce and a wonderful red wine and you’ll be in heaven!

Thanks Johanna for this fascinating insight into your book and for the lovely mention on the back of your novel!