There’s nothing like a long weekend for a mammoth tour somewhere exotic. So when Jo Furniss popped by with photos of Singapore, who were we to say no! She used to live in the city and knows it inside out, its nuances, its unique essence…So when she writes a novel set there, you know you are in for a rare treat indeed…. 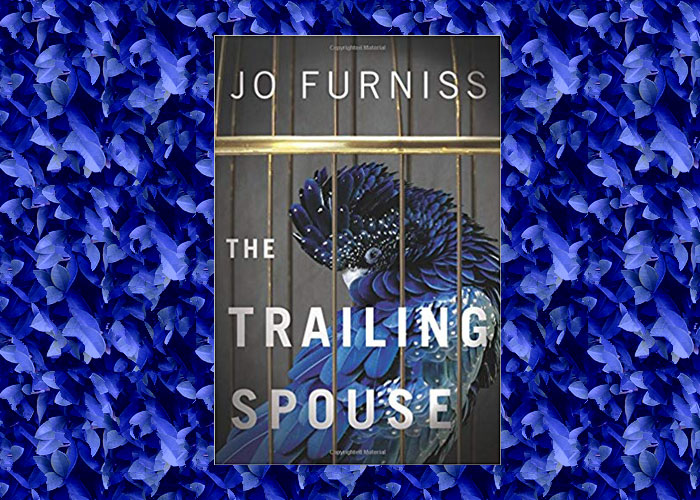 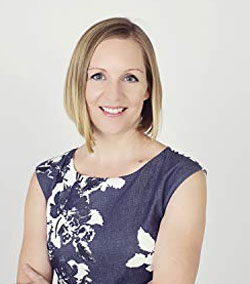 I find locations inspiring because my writing is driven by character, and our surroundings shape how we live. Even though I knew Amanda Bonham, the protagonist of The Trailing Spouse, lived in Singapore, it was important to pinpoint her location precisely – at first I had her in a big house near the jungle, but her character didn’t develop. Once I shut her inside a cavernous apartment at the top of a skyscraper, she started to breathe and her isolated expat experience came alive.

I lived in an apartment on the 31st floor when I first arrived in Singapore. Being so high puts you in touch with the elements – a storm is much more dramatic when you look it in the eye – and you have a sense of dislocation from the real life that happens on street level. Literally, life is passing Amanda by and she often feels that she’s trapped behind glass, even when she’s outside the apartment.

As The Trailing Spouse is contemporary and I was living in Singapore while writing it, I can’t remember doing much research! But I do take notes while going about my daily life which I can mine for details while writing; snatches of overheard dialogue, observations of how the light looks at certain times of day, photos of specific buildings and settings. Research is panning for gold, you only need one nugget and you throw the rest aside. 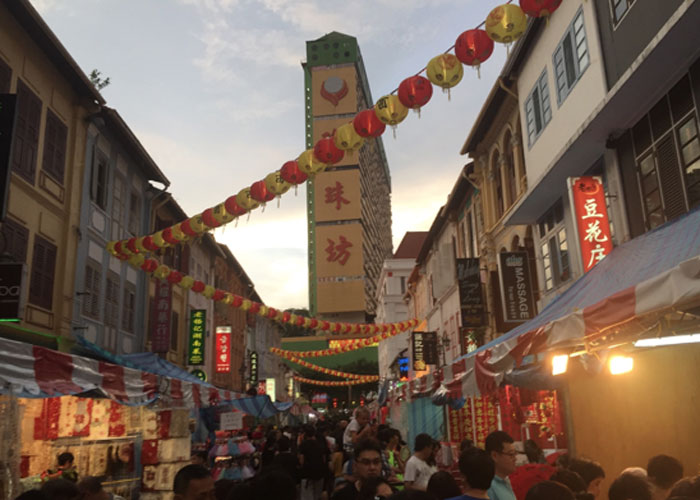 I tend to plunder my world for themes that I hope will resonate with readers. Amanda Bonham’s story focuses on being dependant on HER husband; in the expat world, that dependency is dialled up to eleven, but I think spouses of all kinds will connect with her feelings and vulnerability.

Many people worry about how much compromise they should make – how much control they should relinquish – to a relationship, or a job, or a family. So via Amanda I explore the trust that is required to live your life as a dependant.

Another important element of the story in The Trailing Spouse is about domestic workers. The novel opens with Amanda finding her maid dead from an apparent suicide. While this incident began as a mere catalyst for the action, the issue of the rights of domestic workers took on a more significant role as the novel developed. 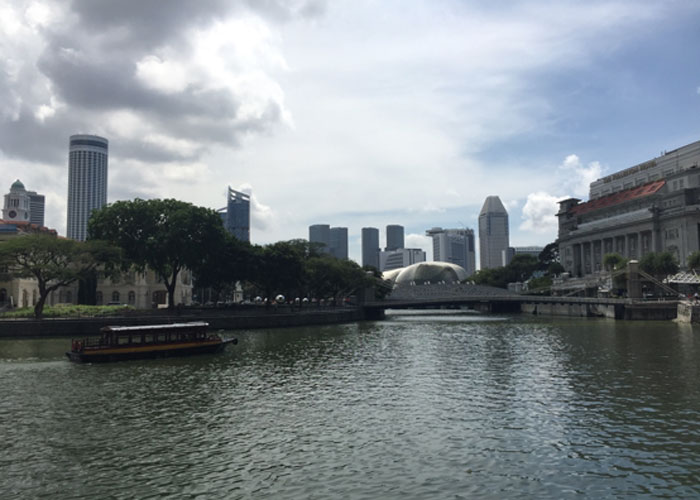 Less is more. Tropical Singapore is an evocative location and it was tempting to pile on the description and turn The Trailing Spouse into a novel-cum-guidebook. But, of course, sensory responses should be used to backlight a character rather than simply describe the surroundings.

Amanda, who is so isolated from her world, often feels cold inside her air-conditioned apartment – at odds with the tropical heat outside. Another character who grew up in Singapore and recently returned to the country enjoys a more typical Singapore-expat experience as she notices all the sights, tastes and smells that prompt memories of her childhood. These two characters – Amanda and Camille – often have sensory responses that are in opposition. 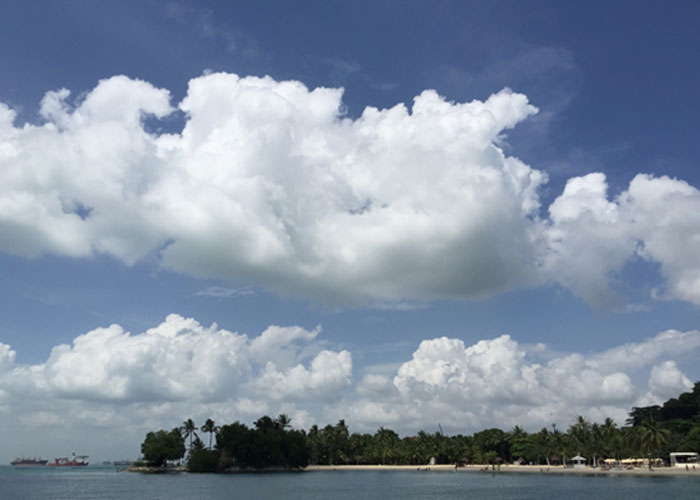 Your locations! There are some stunners here!

The resort island of Sentosa, which is connected to the south coast of Singapore by a short causeway, was in the news recently as the location of the summit between Donald Trump and Kim Jong-Un. For most people, though, it’s a place of fun – sand, sea and, ahem, shipping. Amanda lives by the ocean in a penthouse apartment. 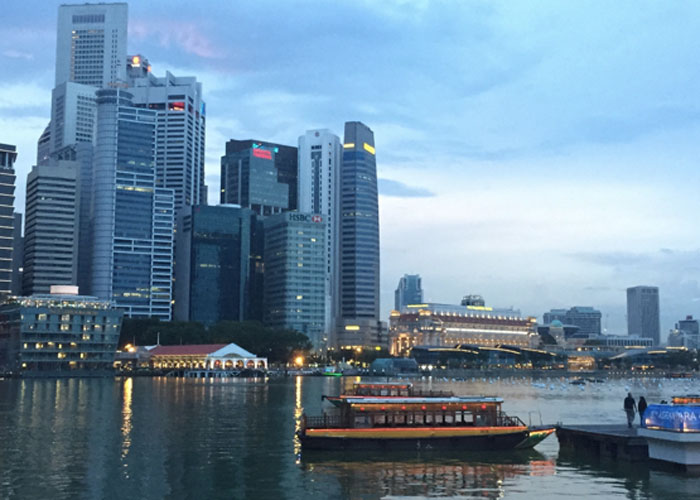 The view from Marina Bay Sands across the water and past the wooden bumboats to Merlion Park is one of my favourite in all Singapore, especially at dusk. There’s a low white building on the water called Clifford Pier, which is now part of the Fullerton Bay Hotel but used to be vacant. When I worked nearby, I would take my packed lunch to eat overlooking the water. Once upon a time, this is where ships from Europe docked and I loved to think I was walking in the footsteps of writers like Somerset Maugham. In The Trailing Spouse, Camille Kemble meets Amanda’s husband, Ed, in a fictional bar along this waterfront. 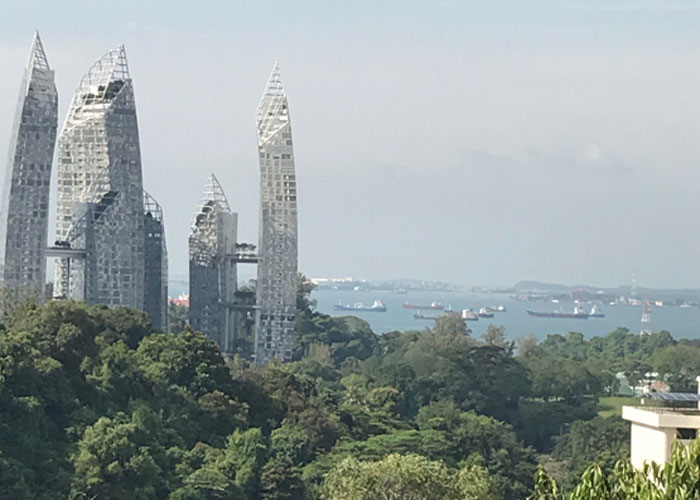 Any tips for visiting?

Get up and out early in the day. Outdoor attractions like MacRitchie, the Southern Ridges and the Botanical Gardens are best during the cooler hours.

The Botanical Gardens, in particular, is busiest right after sunrise (around 7am), with locals doing yoga, tai chi or Luk Tung Kuen exercises. Get to the visitors centre early and you may be able to join in the LTK class – it’s invigorating!

Pick up a copy of the local food guide Makan Sutra and try delicacies at Hawker Centres around the island. The best stalls have the longest queues, so be prepared to wait. There are even hawkers with Michelin stars.

Get an EZY-link travel card and venture onto the underground MRT or the buses. There are many apps to help you on your way and local people tend to be super friendly guides!

Pack light, by which I mean the lightest clothes you can find. It’s not only hot but also humid so thin cotton is king.

Give Singapore time. Often, visitors only stay for a night while in transit, but there are many sides to this little island that get overlooked.

Wow! That’s quite the journey in more ways than one! A great taste of Singapore and of The Trailing Spouse. Thank you so much for stopping by!