A visit to Sweden is always welcome on The BookTrail and so when  Elisabeth Norebäck  offered to take us there for a literary visit, who were we to say no? Sweden and Stockholm are two of the most beautiful places in Scandinavia if not the world and so setting a crime novel there is going to be interesting…

Everyone loves a bit of Scandi Noir right? 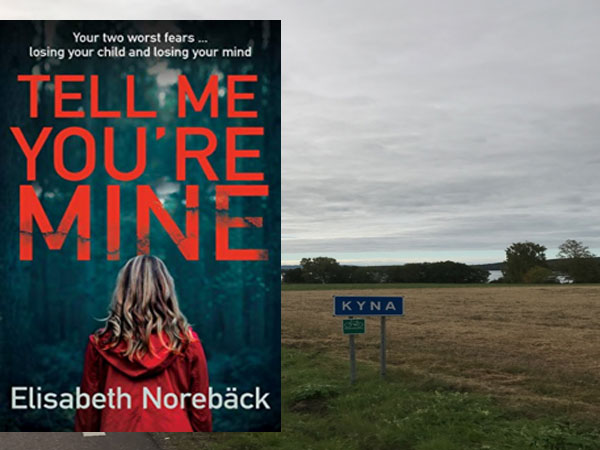 Tell Me You’re Mine Elisabeth Norbäck

Novel on a postcard

Stella Widstrand is an esteemed psychotherapist with a happily normal life. When a new patient enters her office, Stella is convinced: that girl with the long black hair is Alice, her daughter that went missing twenty years ago. She is determined to find out the truth, no matter the cost. 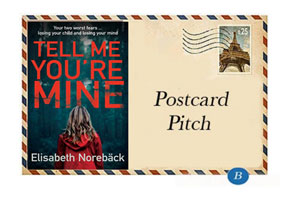 Most of the book is set in three different locations in Sweden: Stockholm, Dalarna and Småland.

Stockholm is the capital of Sweden and is beautiful any time of the year. The city consists of fourteen islands where Lake Mälaren flows into the Baltic Sea. You find Stockholm archipelago, with its 30 000 islands, not far from the city.

Dalarna is often called “Sweden in miniature” and is located in the middle of Sweden. Here, the well known Dala Horse has its origin. It is a popular place to visit because of the old traditions and Swedish folk culture, Lake Siljan and all the red cottages.

Småland is located in the south of Sweden. It has a beautiful landscape with the Blue Coast facing the Baltic Sea. 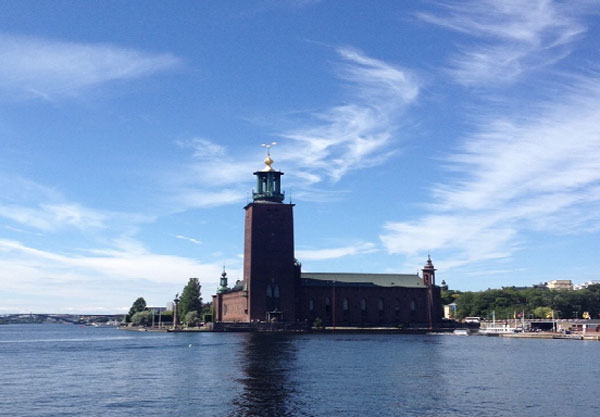 I did not do much research of the setting. I wrote TELL ME YOU’RE MINE after finishing several years of studying, while on maternity leave. Since it was my first attempt to write a book I chose places familiar to me. 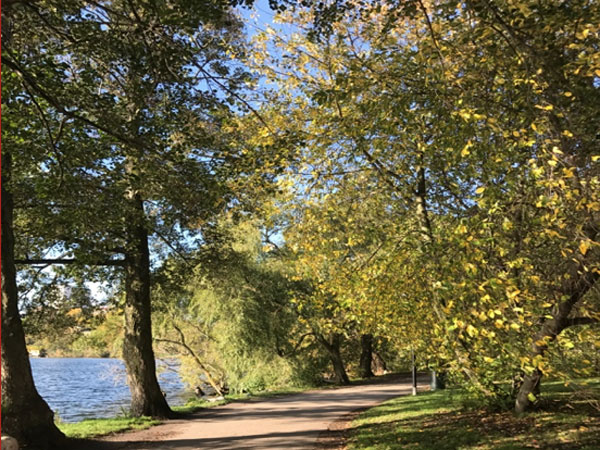 The pathway towards Rålamshovsparken from the City Hall (C) Elisabeth Norbäck

I live near Fridhemsplan in Stockholm, which is where Stella is working. It was in the Kronoberg’s Park I got the idea for the book in the first place. Most locations in Stockholm are well known to me since I live here, I have visited them all and even studied at KTH myself.

I also spend a lot of time in Dalarna but took some time to go to especially Barkargärdet in Borlänge, where Kerstin lives, and the Hällsjö Home to get a feeling for the places.

I’ve spent enough time at the Blue Coast to get a sense for the environment; there are a lot of beautiful places along the sea with beaches and cliffs. I chose to make up my own resort though, that looked exactly the way I wanted it to, and named it Storvik. 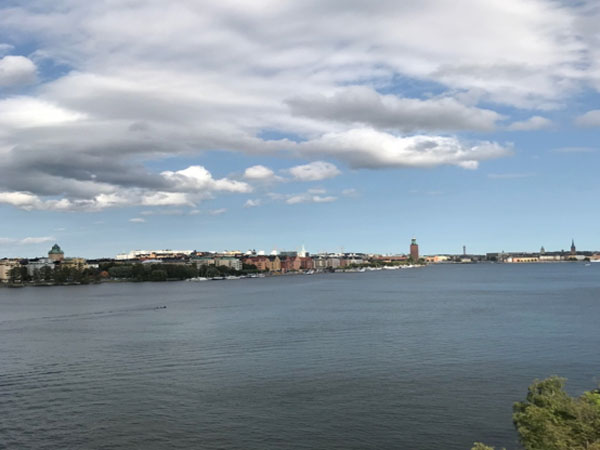 Do you have a link to the places?

I have a link to most of the places in the book. I was born and raised in Borlänge, Dalarna, and still have most of my family there. I spend every summer with my husband and our three kids in the summerhouse in Kyna, the very village where Isabelle’s grandmother lives. When I was seventeen years old, I moved to Stockholm, where I’ve been living since. Småland is the place where my husband grew up. Strandgarden in Storvik is not an actual place though but located along the Blue Coast somewhere near Oskarshamn.

I got the idea to the story when I sat in the Kronoberg’s Park, near Fridhemsplan in Stockholm, with my then new-born son. It was one of the first days of spring and the sun was shining; I closed my eyes for a while and when I looked up, his stroller had rolled away a bit. That is when the thought struck me: what if he disappeared that day and I didn’t see him again in until twenty years later? Would I know it was him? Can you know such a thing? I couldn’t let go of the thought, so I decided to write a story about it.

When it was time for my son to start preschool, the book wasn’t finished. I had to start looking for a job, I had been studying for quite some time. At one interview I got the question if I wasn’t too creative to be satisfied with a job at their tech company. When I didn’t get the job, I realised if I did get it, the book would never be finished. I never applied for any more jobs, I stayed at my poorly paid nurse assistance job and instead continued to write.

Stockholm is beautiful any time of the year! From the central station it’s a short walk to the City Hall(see pic above) , where the Nobel Banquet is held every year. There is a beautiful pathway along Riddarfjärden, the eastern-most bay of Lake Mälaren, where you pass Trattorian (the restaurant Henrik and Stella went to) and eventually reach Rålamshovsparken, a park located below Fridhemsplan, very popular for both locals and tourists. But there’s more to see in Stockholm: the Old Town and of course Skansen, the world’s oldest open-air museum, showcasing the whole of Sweden with houses and farmsteads from every part of the country. 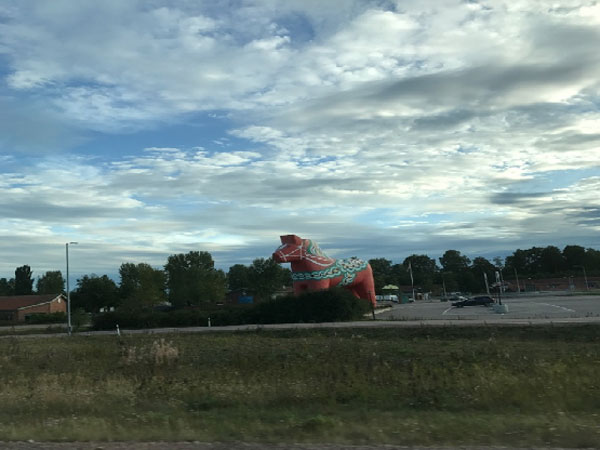 In Dalarna, there is a lot to see! It is something special to celebrate midsummer in Dalarna, with different folk costumes for each village. Borlänge is mostly known for its paper mill and steel mill and nearby there is Falun and Falun Copper Mine, a UNESCO world heritage site. You can visit the Zorn museum where Sweden’s most famous artist, Anders Zorn lived and worked, or take the lovely trail to the house of Carl Larsson, another famous Swedish artist. Kyna is one of the beautiful villages around Lake Runn, located just outside of Ornäs. Take a tour at Ornässtugan, where it’s told the Swedish king Gustaf Vasa hid from the Danes in the sixteenth century. You can go around Lake Siljan and see the beautiful small towns of Leksand, Tällberg and Rättvik. In Nusnäs, you can see the factories where the Dala Horses are handmade, ever since 1922. 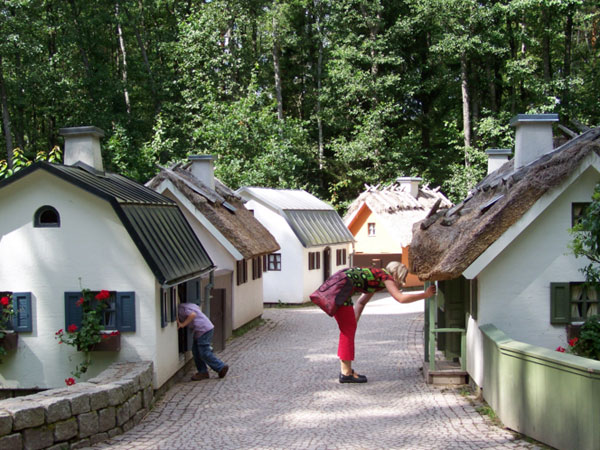 Småland is the place where Ingvar Kamprad first started IKEA and where the internationally known author Astrid Lindgren grew up. There is both an IKEA museum and Astrid Lindgren world, that’s popular for both young and old. Småland is also known for being “The Kingdom of Crystal” with many glass artists to visit, such as Kosta boda and Orrefors. Not least it has a beautiful landscape with the Blue Coast facing the Baltic Sea.

How do you think your lead character would manage in the real world?

I think Stella would manage excellently in the real world! She is a strong and intelligent woman, determined to do what’s right for her and the ones she loves. The challenges she faces are some we all could meet in our lives, in some way or another.