Cheese in a casket with Sophie Hannah

I have never been inside a cafe like this before. But when Sophie Hannah has written a novel about a Belgian detective and called it Closed Casket, where else could I suggest other than a cafe in Brussels  le Cercueil where you sit on or beside coffins? It’s a bit creepy and I’m amazed I got through the door to be honest but then Sophie Hannah has killed people (in her novels of course) so I think I’ll be ok with her.

This meeting is in honour of First Monday – THE event of the calendar where authors gather in Diagon Alley, I mean Cecil Court, home of Goldsboro Books or another fine location in the city and talk books books and even more books. I’ve nabbed Sophie before her big First Monday panel: we eat cheese served in a neat casket of its own, and drink Kir Royale… 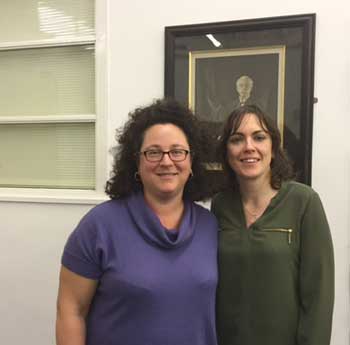 How did your work with Agatha Christie novels come about?

I’ve been a devout Agatha fan since I was twelve!  No one writes like her.  Her books are firmly embedded in my literary DNA as the blueprint for the perfect detective novel.  A few years ago, three things happened at once. One day, my agent was having lunch with Agatha’s editor at HarperCollins, and he suddenly said: ‘You should get Sophie Hannah to write a new Poirot book! She’s a massive fan.’ He didn’t know that the Christie estate was starting to think, for the first time, about commissioning a continuation novel. Meanwhile, not knowing any of this, I had an idea for a high concept mystery and solution that I loved. But it wasn’t a contemporary idea, it was a kind of Golden Age idea which needed a Golden Age detective – and Poirot is the ultimate Golden Age detective! It all came together at the same time and a few months later I was commissioned to write The Monogram Murders.

Before I took on Poirot, I published lots of psychological thrillers featuring my own annoying-genius detective, Simon Waterhouse.  But yes, Closed Casket comes out in September.  The Monogram Murders was such a fantastic experience for all involved, and it reminded people all over the world of Agatha’s greatness and boosted the sales of her Poirot novels, so I was asked if I’d like to write another one. I already had a great idea for a central concept, so I said ‘Yes, please!’

Setting is very important in crime and mystery novels. Can you tell us more about this? 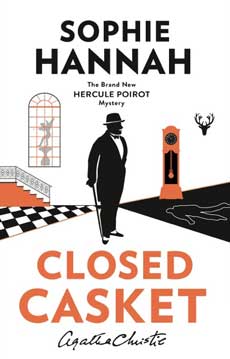 Agatha Christie didn’t set any Poirot cases in 1929, which is one reason why I set mine in that year.  I chose Ireland because it’s a country I love, and the action takes place in a huge country mansion, with all the suspects and of course the victim being either residents or guests in the house, so there’s a limited pool of suspects, which seemed to me to be an archetypal Christie setting.  Also, the troubles happening in Ireland at the time provided the ideal backdrop to the main story. Many of the characters in Closed Casket are members of the Anglo-Irish aristocracy at a time when the Anglo-Irish aristocracy wasn’t too popular in Ireland. The political scene isn’t highlighted but it nicely echoes the themes in the book and is even used to provide a tiny clue!

The story is about Lady Playford who has a house party and then drops a bombshell about her will.

She’s a children’s writer who’s very eccentric and widely loved. She’s made a lot of money from her work, and one day she announces that she’s leaving it all – money, houses, everything – to a terminally ill young man who’s almost certain to die before her. She’s invited Poirot and his sidekick Inspector Edward Catchpool to the party, and they have to work out what’s going on. Poirot thinks she might be anticipating a murder, but when the murder happens, the victim isn’t who Poirot thought it would be…

Which Agatha Christie novel would you like to be a character in yourself and why?

Well, I don’t want to be murdered!  Maybe Dumb Witness – there’s a very obstinate dog in that one called Bob whom I’d love to meet.  He’s very like my own Welsh terrier, Brewster. Brewster almost found his way into the pages of Closed Casket… 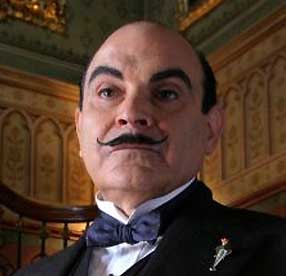 This year marks the 100th anniversary of Poirot’s birth. What do you admire about him?

His fabulous moustaches! But also his loyalty, his insistence upon order, his interest in motive and psychology, and his sense of justice. Poirot is passionate, and flawed, and occasionally infuriating, and I just love him!

Apart from my Poirots, I’ve written eleven psychological thrillers and one supernatural thriller.  My first was Little Face and my most recent is The Narrow Bed – in which a serial killer appears to be killing pairs of best friends, but when he targets Kim Tribbeck, a woman with no friends at all, detectives realise that something altogether more sinister is going on…

At a dinner party of 5 fictional detectives, who would you invite and why?

Poirot – because he’s my top fave; Miss Marple – because she’s wonderfully sharp and misanthropic, and there’s no one I’d rather gossip with; Val McDermid’s Tony Hill – because he’s such a lovely and fascinating chap; Sue Grafton’s Kinsey Millhone – she strikes me as a detective you could really have fun with; Lincoln Rhyme, Jeffery Deaver’s detective – he is super clever and unpredictable, and would reveal a new twist with every course served!

What do you do when not writing? How do you like to relax?

I love swimming – in cold lakes, the sea, luxury hotel pools, any expanse of water I can find!  I also love having deep tissue massages that leave me feeling as if I’ve been beaten up! And reading crime fiction of course!

Where have you been to visit a literary location/go on a booktrail?

I went to Greenway, Agatha Christie’s summer home in Devon, when writing my first Poirot book, and I’ve stayed there many times since. It’s beautiful and a bit isolated and I loved writing there. It ended up inspiring the house in my 2015 psychological suspense novel A Game For All the Family.