Chatting to Mari Hannah on the blog today. A North East Crime Writer to watch  – all her books are set in Newcastle and the North East of England.

Hi Mari, well, I must start with congratulating you on your wonderful nomination on being shortlisted for the Polari First Book prize. How do you feel about this recognition? 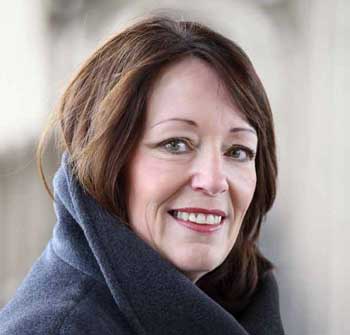 Thank you. I was completely blown away when I found out. The Polari First Book Prize is a very big deal for me, validation after years of hard work and for having written a lesbian in a lead role. Kate is the character I always wanted to write about but I did wonder how she’d be received. The shortlisting is my answer.

When does the final result get announced and what would it mean for you to win?

The winner will be announced on 13th November at the Polari Literary Salon in the Southbank Centre. I’m hoping to be there in person to meet the other four contenders – any one of them would be a worthy winner. I’m so grateful to have come this far but it would be amazing to go all the way, so fingers crossed.

The Murder Wall was the feature of one of my book trails where I travelled to the major settings and places in the novel. Do you agree setting is important in a novel and why did you set it in the North East?

A sense of place is vital in any novel. It plays a major role in all my books. I write about the North East because, even though I wasn’t born here, it’s where I live and where my heart is. I’m lucky because Kate is a detective in Northumbria Police, one of the biggest forces in the country. That means I’m able to ring the changes as far as locations go. It keeps the books fresh, taking my readers to new destinations every time. 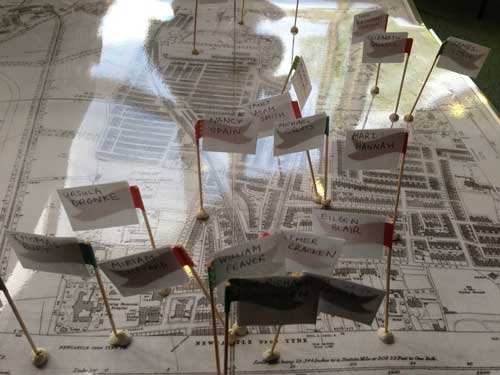 map of crime fiction in Jesmond

You showcase the region well. In particular the area of Jesmond where Kate Daniels lives. What is your connection to the area if any?

Before I moved to the Tyne Valley in 1996, I used to live on the edge of Jesmond Dene. I still visit as often as I can. I use real street names where possible, although I would rename a key building if I had – for example if anything awful was to happen. I’ve not left any dead bodies there . . . yet! Many Jesmond shops, bars and cafés make an appearance in the books.

A screenwriter friend of mine recently put together a presentation of writers and their connection to Jesmond. If memory serves, you were also there when it was delivered. I can’t tell you how proud I was when he included me. Can you spot my flag on his map?

I loved the character of Kate Daniels. And I hear she’s off to the US! Congrats on that too! If her books were made into a movie, do you have an idea as to who would play the characters?

I’m thrilled that The Murder Wall, Settled Blood & Deadly Deceit have been acquired by Witness Impulse, an imprint of William Morrow/Harper Collins, a major US publisher. I can’t wait for 15th October when the first title goes live.

If a movie was made (I assume you mean a feature film in the US, not the UK) I’d rather not speculate. I don’t think I’d have any say in picking the leads and we all interpret characters differently. It would be interesting to see which actors the producers came up with. 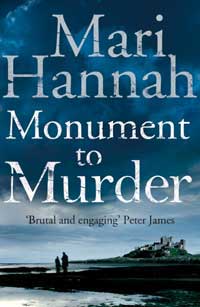 People often tell me that my books would make a great crime series for television. In fact, The Murder Wall was written for TV as part of the BBC Drama Development Scheme long before I adapted it. I hope they make it to the small (or big) screen one day. If a TV series was commissioned in the UK, I’ve been touting Jill Halfpenny to play Kate. She home-grown Geordie talent and I think she’d be terrific.

Another congrats is due (phew!) on the inclusion in Diva magazine where you say you had a struggle to get Kate’s story heard due to her sexuality. Are you proud to think that now she is leading the way for strong female leads?

Oh yes, proud that my Diva article The Birth of a Crime Series was one of the magazines ‘most viewed stories’ in June, and delighted that Kate is viewed in such positive terms.

Can you tell us about your next book?

Monument to Murder will be published by Pan Macmillan on 21st November 2013, five months ahead of schedule, and will be launched by Forum Books in Corbridge on the evening of 20th. I have a mini North East book tour scheduled throughout the month of December.

How do you go about plotting your novels? Do you have a system?

This is a question I get asked a lot. Once I have an idea, I tend to flesh out it out in an elongated synopsis to make sure it has legs. It’s the way I was taught screenwriting and it stuck with me. Having said that, I’m using a card system for the book I’m currently writing, the obvious advantage being that I can move them around at will, altering the position of scenes or even whole chapters. Then I add them to my murder wall, just as a detective would solve the puzzle of a real murder case, and try and make sense of them. I’ve yet to find two writers who use exactly the same method.

What is the best thing about being a writer.

There are so many upsides: doing what I love, working from home, meeting readers who have enjoyed my writing, knowing I have what it takes to entertain. There’s no other job I’d rather have.

Thanks Mari for taking the time to chat with me. Can’t wait for the next installment of the Kate Daniels series!