When I woke up this morning, I didn’t think I’m be sunning myself on a Greek Island! 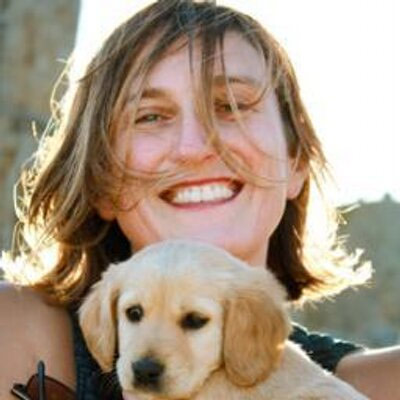 But when Jennifer Barclay called me up and invited me for a glass of Ouzo, what was I going to do? So here I am, precariously hanging on to a donkey who is making his way up the hillside, on the way to meet Jen. Ah there she is! Sitting in her straw hat on the terrace. Then I see the ouzo. At the same time the donkey sees the carrot so I’m not sure if the donkey throws me off or I jump off. Either way within seconds, we are all eating and drinking Greek Style.

Here’s Jen. If you want to know ANYTHING about moving to Greece, living in Greece etc then this is the ultimate travel guide!

This is the follow up to the book Falling in Honey. Why did you give it the title an octopus in my ouzo

An Octopus in my Ouzo is the story of what happened after Falling in Honey, but I wrote it as a standalone book too. It’s about my own experiences during my first three years of living all year round on a tiny Greek island – things which felt so special that I had to write about them – but it also reflects on how real life works in such a remote little place and what we can learn from that. And there’s another thread of narrative that’s nothing about Greece at all, but about breaking with convention and living life the way it feels right to you. Of course, living in such a different culture I was bound to get things wrong at times, and the title An Octopus in my Ouzo is supposed to conjure that sense of getting mixed up – and to show that it’s a funny sort of book too. 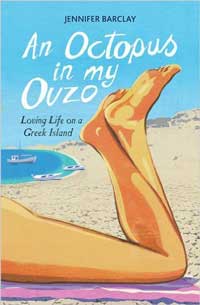 Your love of Greece is clear. What is it that captivates you about the country?

There are two quotes at the start of the book. One is by Gwendolyn MacEwen, a poet, who said that to ‘go among the Greeks you must be just a little mad’. The other is from Wind in the Willows, and it’s where Mole asks ‘But isn’t it a bit dull at times?’ Living in Greece is a little mad and never dull. It’s also stunningly beautiful. And usually sunny. And there’s a passion and love of life and sense of humour that I’ve not found anywhere else.

Did people call you brave or crazy when you first went?

I remember one man asking ‘Is that wise?’ when I said I was moving to Greece. And another man being surprised that I was intent on staying after year of eagles flying over my house and swimming in the sea. Perhaps they believed that what they see on the news is everything you need to know about a country, or maybe it just wasn’t for them. Some people did say I was brave and I appreciated that but it wasn’t brave at all, just a considered decision to be healthier and happier by choosing to try a different sort of life.

–       If I hadn’t had a way to make a living, now that would have been brave. I have Albanian neighbours who came to Greece to scratch a living; Greek friends who keep their sense of humour and hospitality in spite of living through years of crisis; and Syrian refugees started arriving in Greece several years ago to escape war. What I did wasn’t brave. And crazy for me would be to continue living a life that bored me when I didn’t have to. 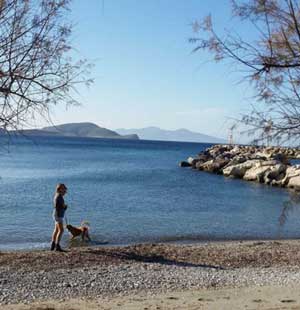 Which places should we visit to experience your version of Tilos?

Quite a few people who’ve read my books have decided to visit Tilos, which makes me happy because these are the kind of people who will appreciate the place, and a few more visitors will help the islanders. But I think my message is that this tiny place that most people have never heard of is unlike anywhere else and has brought me lots of joy; and that maybe you will find your own Tilos – whether it’s a Greek island or somewhere else entirely.

I’ve become a bit of a local celebrity these days, since my dog and I were featured on a Greek TV programmed called 60 Lepta Ellada (60 Minutes Greece). The camera guy loved my dog Lisa because she showed off and barked at the camera. I was in Rhodes two weeks ago, and the chef in a restaurant recognised me. And yesterday the same thing happened in a little café – a woman from Patras recognised me. But only when I mentioned I had a dog. Lisa is the star. When I walk around with her, people say ‘Yeia sou Lisa!’ (Hello Lisa!) and then ‘Yeia sou, er…’ – they can’t remember my name. 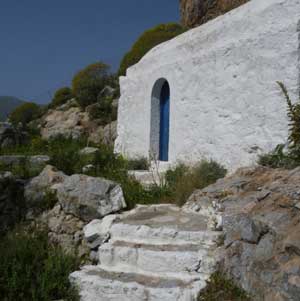 The house where we eat (c) Jenn Barclay

Which other traveller do you admire and why?

I  don’t think of myself as a traveller, although I’ve lived in different countries and written about them; I’ve been living on a tiny island for five years now and I often have to force myself to leave. But I work with books, and many of the writers I work with as an editor or literary agent are extraordinary travellers. One I admire is Diane Esguerra, author of Junkie Buddha, because she went way beyond her comfort zone to travel through Peru with her son’s ashes a year after he died. Another is Sarah Outen, who is working on Dare to Do about her attempt to do a solo loop of the planet by her own power. I like travels that teach us something.

What DOES travelling do to the soul?

Travelling opens us up to experience, and it can also heal us of experience and remind us there more wonderful places and people than we dreamt of before. Yesterday, I was crying because of the beauty of this mountain village built into the rock. I’ve been getting to know a 73-year-old lady called Arhontoula who doesn’t stop working all day, who has looked after me and made me laugh. Many of the inhabitants of the village left after World War II and went to America or Australia, but some stayed. Arhontoula and her husband pay the expenses of their tiny café out of their pensions. Yesterday, a few Greek tourists arrived mid-morning and she plied me with a shot of tsigoudia (like ouzo). ‘But I have to work!’ I said. ‘Just one!’ she replied. 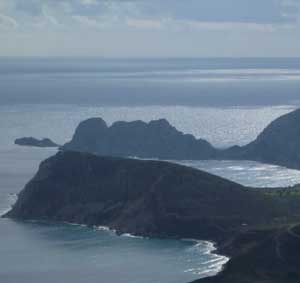 The view from the donkey (c) Jennifer Barclay

And with that, we’ve decided to hang out a little more and spend time in the sun. Susan you need a tan she says (I am very pale) so I slap on some sun protection and my straw hat and relax. So too does the donkey who has reappeared and starting chomping on my headware. Ah well the Greek dream lasted for a little while!