There is a very interesting book out at the moment. Particularly if you live in the North East of England….A murder in Gateshead in 1866…. 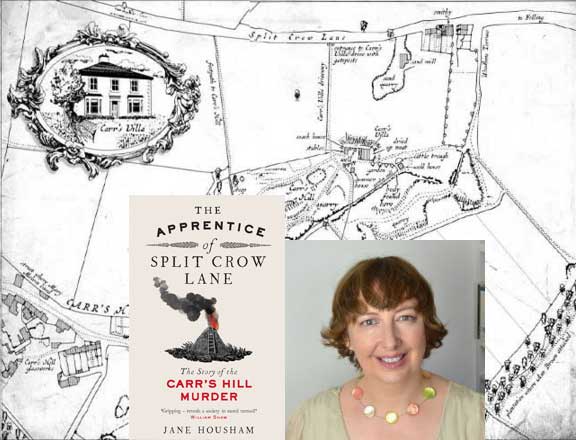 Booktrail The Apprentice of Split Crow Lane before you start…

To say I was fascinated is more than an understatement. I just had to grab the author in question and have a chat. A book in the form of a real historical murder mystery. Now this is not your ordinary read. It’s not a novel but is more of an account written in a very engaging way. The characters come in to focus and you can vividly them walk about and tell you their side of the story. Police reports, medical reports of the day flash up and grab your attention. So, with further ado, I grabbed Jane Horsham for a chat

How did you find out about this story and why did you want to investigate it? I must admit despite being from the North East I’d never heard of it! Shame on me.

I’m not surprised that you’d not heard about the story of the Carr’s Hill Murder. Although the crime was very widely covered in newspapers at the time, it was only revisited once, because of a new, similar murder ten years later. After that, it was forgotten.

I found out about it because I was following my family tree back, looking for interesting things that had happened to my forebears. I had traced my relatives back to Gateshead in the mid-19th century and when I started finding references to a murderer there who shared our family name, my interest was well and truly piqued. However, I never actually managed to find a blood connection with him.

In the course of trying to link back to this person and his family, I found out more and more about the murder, the victim, the police investigation and the murderer and I began to be completely gripped by it. When I learned what had motivated him to attack a little girl in such a vile way, I thought this was something that other people would find of interest and I decided to write a book.

Have you been to the places in the book? How did they make you feel?

Yes, I have. I couldn’t write a book that’s so firmly rooted in a particular place without experiencing it for myself. However, the area has changed immensely since the murder took place in 1866. In the 1930s a huge housing estate was built around Carr’s Hill. The house where the murderer lived was also demolished at around the same time. So when I went there, there was no actual house to see. But I saw that all the footpaths that crisscrossed the open areas (and which had been very useful to the murderer) were still ‘live’, and I found that fascinating in itself.

What kind of research did you do and where did you start? You used many local sources such as the local libraries and the Newcastle Chronicle. Was there a lot to dig out and was it hard to find?

The absolute goldmine of information was the British Newspaper Archive, which is online. I compared all the reports of the murder I could find, to sieve out every last detail. Then, having identified that there was something of a crimewave going on in the area at the time, I put together a timeline of all the arson and assaults, to see if there was a pattern – and there was! As not every local paper is available online, I went to Newcastle library to look at the microfiches of the Gateshead local papers – bingo! I found vital new information. What I really wanted was a picture of the house where Cuthbert lived but there was nothing at Durham or Newcastle Archives. Then, at Gateshead Central Library, a librarian found a short typewritten memoir by a lady who’d lived in the house during and after World War I. It included faint pencil drawings of the house as well as a detailed description, so I finally found out what it had looked like.

PIC: Gateshead Old Town Hall, West Street, Gateshead – where the murderer was first held. The old police station was around the back in Swinburne Place and there were holding cells in the basement of the town hall.

There are many shocks about how people treated each other back then. That part of Gateshead sounded awful! Was there anything that shocked you? Surprised you?

It was pretty desperate. Even though I knew that working people in many English towns and cities of the time lived in very poor housing, I was taken aback by the way that dreadful factories and processing plants were completely cheek by jowl with people’s homes. So when there was a fire or explosion in a factory, there would be terrible casualties. In terms of the murder, I was surprised by how frank the newspaper reports of the sexual aspects were. There was very little of the repressed or coy attitudes I was expecting.

Poor Sarah Melvin! Did you want to give her and the other girls a voice? Did the injustices make you angry?

I felt desperately sad for little Sarah. What an absolutely ghastly death at such a young age – and I don’t suppose her short life was particularly happy either, like that of many poor children at the time. What made me particularly sad was the indifference of society to her – there was so little interest in her as an individual that none of the reports even recorded the colour of her hair. As far as I know, no photos were ever taken of her (her parents would have been too poor to afford them) and she was soon forgotten by the world. But, to balance the picture, in other criminal cases where little girls were attacked but lived to speak about it, they were given a voice at hearings and in newspaper reports and were often praised and admired for their courage and their ability to speak about their terrible experiences.

You mention that the book was inspired by Serial. Can you tell us more about this?

Yes! You’ll know that Serial was the hugely popular 2014 podcast that investigated the murder of an American high school student in 1999. The thing that fascinated me about it was the way that listeners became so caught up in the details of the case and debated every scrap of evidence. I was inspired to look at all the evidence in the Carr’s Hill murder with the same sort of zeal. Ultimately, though, I felt Serial showed that it’s almost impossible to recreate events with absolute certainty: there will always be missing data, ambiguities, or more than one possible interpretation of the ‘facts’. And that’s also true of the Carr’s Hill murder in some respects. I feel it’s valuable to understand that wider truth.

With many thanks to Jane for this fascinating insight into Gateshead’s dark past. And a lasting nod to the memory of little Sarah Melvin RIP

Booktrail Boarding Pass: The Story of the Carr’s Hill Murder