Come Away with the Penguins to Antarctica and Hazel Prior

Let’s travel away with the Penguins to Antarctica!

Have you ever wanted to get away from it all? To a place where there’s not many people and plenty of animals? Cute ones like Penguins? They are cute, walk like old men and they make nests and mate for life.

Hazel Prior has made all of this possible and more with her latest novel…and I travelled to a very cold place to meet her and new feathered friends…. 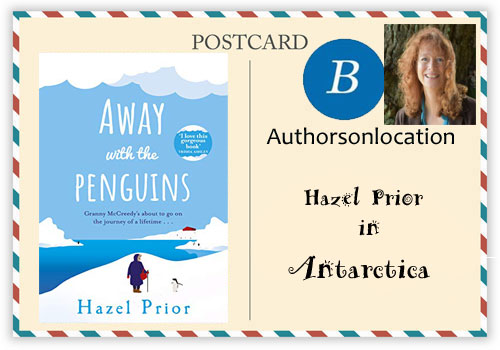 Your story is so moving. Why did you want to write about penguins in this way?

I’m glad you were touched by the story. It was a close friend who inspired me to write a book involving penguins. Her husband died very suddenly and she found a way of dealing with her grief by travelling round the world and taking photos of penguins. She has gained such joy and solace from her penguin trips – which made me think about nature as a healer. Fluctuations in penguin colonies are indicators of climate change and I feel strongly about conservation issues, so there was a chance to explore this, too. Like most people, I also find penguins very charming! 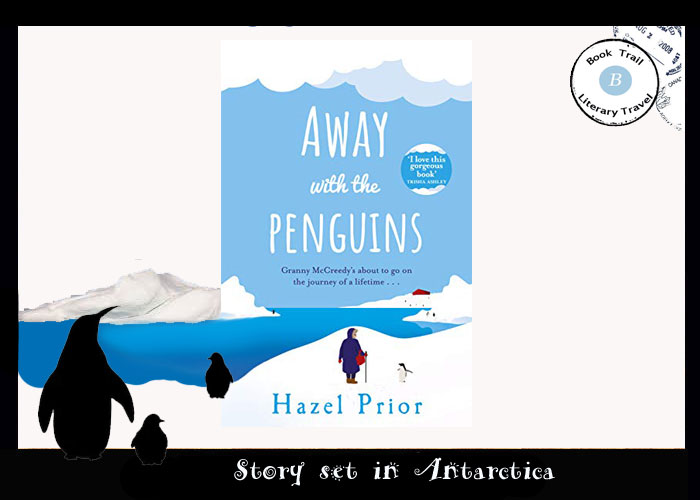 Tell us about the locations in the novel

My heroine, Veronica McCreedy, lives in a mansion on the West coast of Scotland. The other main character, Patrick (her grandson) lives in a shoddy bedsit in Bolton. But they both end up in a scientific study base on an island in the Antarctic, where most of the action takes place.

I have to admit, I haven’t actually been to any of the locations in the novel! I visited some real penguins, though, at Living Coasts in Torquay, and the staff there were very generous and shared all sorts of penguin facts and figures. A lot of googling was involved for researching the locations, particularly, of course, for Antarctica. I spent hours watching penguin footage on Youtube and avidly followed nature programmes about polar regions. There are several blogs on the British Antarctic Survey website written by scientists who study penguins in the Antarctic South Shetlands, so that was incredibly useful. I read several books about the region from cover to cover and paid particular attention to the pictures because I really wanted to put myself there in my imagination. My penguin-obsessed friend (who has been to Antarctica twice) filled me in on various other details.

In fact you can’t go to Locket Island itself, which is the main setting for the story, because I invented it! I wanted to name the island to link in with Veronica’s past… and I enjoy creating locations, just as I enjoy creating characters.  However, I’ve tried to stay true to the general climate and landscape of the South Shetlands. I’m not going to recommend taking a trip to that region unless you’re passionate about it because travelling so far isn’t good for the planet. Lancashire and Ayrshire (the other settings) are, of course, beautiful too, and much easier to reach!

Ageing is an important issue in the book too?

Is anyone really full formed in life? Certainly not in their twenties?

In my opinion none of us is ever fully formed. We keep having new experiences throughout our lives and each experience changes us in some way, so we’re always evolving. I’ve met many people recently who are taking up new, exciting challenges in their eighties and nineties. As a tribute to them, I wanted to have an elderly heroine who goes on an adventure and learns from it. This also gave me the opportunity to explore Veronica’s past, which is gradually revealed through the book. Society and values were so different in 1940s Britain. Veronica’s wartime experiences explain a lot about her attitudes and the way she behaves.

You must love animals that comes out loud and clear. What about penguins and which other animals do you love?

I certainly do love animals! I’ve always liked penguins but have developed an even greater admiration for them after doing so much research for the book. I love their cheerful resilience in spite of the incredibly harsh conditions they experience every day. I’m fascinated in birds generally and find them quite mystical – their migrations and murmurations, their amazing singing. I adore cats, too (we have a very spoilt old ginger cat called Purrsy). And I love seeing any animal in the wild – deer, foxes, badgers, hedgehogs. I feel it’s a real privilege to share the world with them all.

What do you hope people get from this novel?

I would love readers to feel entertained and uplifted by the story. If AWAY WITH THE PENGUINS can prompt anyone to respect or value the environment just a little more, that would be great, too. Old age is often something that’s dreaded, but I’d like my book to highlight that it doesn’t have to be like this. What I admire most about Veronica is her refusal to give up. Like the penguins, she beats the odds stacked against her. Not only does she prove herself to be a survivor, but new portals of opportunity are still opening up for her. The ultimate message of the book is one of hope – and that’s something we all need.

In the summer I like to take pen and paper outside and will write at the garden table or sprawled on a rug on the lawn. After the first draft, writing has to be at my computer, though. I’m lucky enough to have a little office in our home. I have a wonderful penguin photograph above my desk to encourage me along.

Again, on a rug in the garden if the weather allows. Otherwise, not much beats reading in bed!

Thank you so much Hazel for such a warm and interesting visit. I will take home that Penguin wisdom home and keep it forever.

BookTrail Boarding Pass: Away with the Penguins