There’s some cities that are so well evoked in fiction that you think you know them. That you’ve seen most of the gory alleyways and the blood spattered streets. The tourist spots never look the same when the crime fiction writers get their hands on them. Take Brighton for example, made so famous in fiction thanks to the likes of PeterJames and Graham Greene to name but two.. There’s a thriller by Alison Belsham out tomorrow however that puts the bloody and tattoo covered spots on to its map. 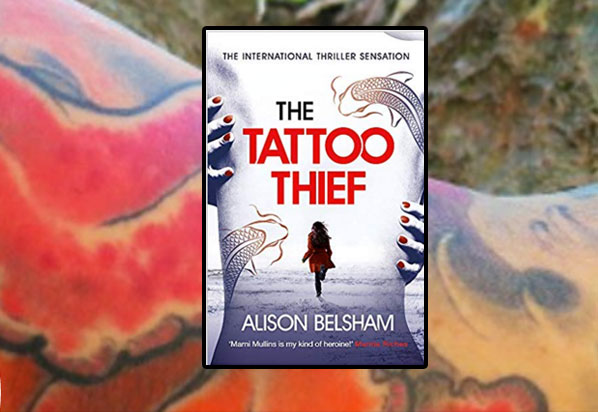 The Tattoo Thief (with author tattoo in background)

Let’s go through the city through the eyes of Alison and Marni her lead character who is an expert in tattoos….If you’re nervous around needles you might want to read through one eye…

Brighton is a city known for its culture, its narrow winding streets with shops aplenty, the long beach, abandoned pier and the range of people who  both live and visit here. It’s a a tourist haven for the amusements, the Pavillion, the gardens, lush houses, theatres and more. It’s a real cultural hotspot.

Although Alison’s book illustrates that and more, it focuses on the dark side, on the dark alley ways and the shadowy tattoo parlours. When it gets more chilling still is when bodies missing tattoos are found abandoned close to tourist spots such as the Pavillion….You won’t see this in the same way again!

“It was a Disney Palace built in Regency Times, a wedding cake concoction of onion domes,spiky towers and pale creamy stucco which always made Marni think of Scheherazade and the One Thousand and One Nights.”….(apart from the body)

The beach and pier

Marni comes here to have a few minutes to herself. The view is iconic for many and during the day the beach is packed and the pier busy. There is another pier further along however which stands like an abandoned relic (in the background in the image)

“Silhouetted against the dark sea, it had been left to rot after being gutted by fire. No longer umbilically attached to the shore, it was now an island, haunted by the ghosts of long-forgotten holiday makers and small-time local gangsters.”

There’s normally lots of tourist in Brighton but in the novel there’s a tattoo convention so the town is busier than normal. Clubs are heaving, more drunks and people wearing hoodies in  the streets. There’s someone here however moving through the shadows, taking tattoos of bodies, and leaving a sick and gory calling card in the process. Visiting the grungy pubs on North Road in the process….(they visit the Hand and Heart in the novel which is on the left of the image)

Just goes to show that you can look at a city so much, either via fiction or real life, but with a new book, there’s always the chance of being surprised at what you find afresh.  Brighton it would seem has more than one bloody surprise up its sleeve and that is the tattoo culture here, the shops and people who offer a great service, but then a crime author comes along, gives them another use for a scalpel and tattoo gun….

This novel was first pitched, quite aptly,at Bloody Scotland. Bloody Brighton should be the tag line….