The Booktrail Beer Tent has been more than busy over the bank holiday weekend but we’ve managed to coral a few Bloody Scotland attendees into chatting about all things crime. The beer is on tap and so is the chat.

This is the line up for the Scotland the Grave panel this time – Click on their names to see their line up of fantastic novels! –  Catriona McPherson, Douglas Skelton, Russel D Mclean with  Gillian Galbraith behind the bar ( she serves a mean cocktail) 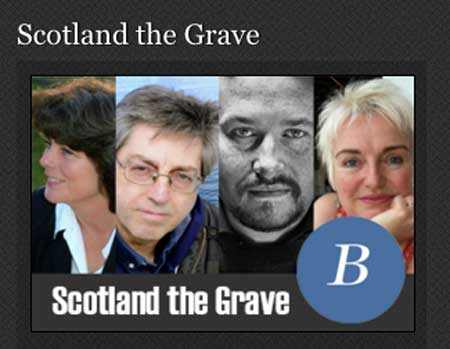 How much does the Scottish setting influence your writing and crime novels?

Douglas – It is a huge influence because it gives me a very real, very evocative background in which to base the stories. The plotlines themselves could, in truth, be set anywhere but the texture and the atmosphere is all Glasgow.

Catriona – Oh, totally. I quite often start with a setting. I’ll go out onto the Lanark Moor – for instance – and stand there in the drizzle waiting for imaginary people to start talking to me. Or I’ll pore over am old OS map of a town  and look in the Post Office Directory to see who lived at what address. Sometimes a name leaps out and a story starts to form around it.

Russel – In a way I suppose it dictates the mindset of the characters and the kind of stories I tell. Its difficult to tell a rip roaring Silence of the Lambs style thriller in Scotland (and make it believable) but the country is perfect for street level violence, dark humour and tough as nails bad guys. Oh and bad weather, too.

Why is Scotland – and your place on the literary map – ideal for murder?

Douglas – It’s no more ideal than any other part of the UK, or the world for that matter, but it’s ideal for me because that’s where I’m from!

Catriona – The long winter nights are a big help. And the emptiness of big swathes of the country. Nothing helps a crimewriter put a character in peril more than patchy mobile reception.

Russel – I believe anywhere is ideal for murder (or crime in general), but the location influences how you use the crime to explore the it.

In terms of Dundee, which I’m defending for the purposes of the panel at Bloody Scotland (even if my new book’s set in Glasgow) crime fiction was ideal for me to explore a city which had seen some bad times in the past and was going through a boom period when I began writing about it. The tension between the Dundee of the past and present was ideally mirrored through crime and criminality (and murder), which would bring out the extremes of feelings about these changes.

You’ve put your own spot well and truly on the literary map. What do you like about them and why did you choose them as literary locations?

Douglas – Glasgow- It’s where I know. I was born there, and although I don’t live there anymore, it’s still very much my home. It’s a rich, warm, funny city with a dark side, like everywhere else. It’s that last bit that people like me both exploit and exaggerate, although I never forget the humour.

Catriona – Galloway –  Well, thank you. Galloway was where I became a writer and a lot of thinking got done on empty woodland paths. There’s a bluebell wood near Gatehouse that’s a great thinking wood. Overall, it’s that isolation again – D&G is really empty – and the fact that there are some pretty dreich wee towns and some truly smug wee towns, cheek by jowl.

The house I lived in in Galloway was an inspiration for THE CHILD GARDEN. I was homesick for it, after I moved away, so I wrote a love letter to it by letting my heroine be there.  And the beach in THE DAY SHE DIED was where I was sitting when I decided to try to write a crime novel.

Russel – I chose Dundee very specifically because it had been overlooked for a long time and I felt there was this history and character there that would suit the kind of stories I wanted to tell very well. Also, I was writing about a PI and someone who had to know his city. The thing with Dundee is that its a city with the feel of a small town; people tend to know each other, and you always find some weird connection with people after you’ve lived there a while.

Glasgow suited the kind of larger scale stories I wanted to tell with the newer books, and also allowed to break away entirely from the McNee mysteries. I needed a new place and new feel. I get bored easily as a writer and a reader (which is why the McNee series is only five books long), so the challenge of a new location was an irresistible way to keep things fresh.

Where would your main character take us to?

Douglas – Davie McCall has a yen for the Highlands, which is clear in the final book. To say anything further would be a spoiler! Dominic Queste will – hopefully – take us further afield in Scotland and to the USA.

Russel – The idea of Mcnee as any kind of tourist guide is frightening. But if he was in a good mood, likely he’d drag you right to the nearest pub. Probably the Phoenix or Mennies (AKA The Speedwell) on Perth Road; two of Dundee’s finest watering holes.

Kat, from And When I Die, would take you to see Glasgow’s West End – the Botanics etc. Anywhere she wouldn’t meet her family, basically.

I leave them still in the tent….there is more they want to tell me about Scotland but for now…the Ceilidh has started….

Be sure to visit each author in turn  to see their line up of fantastic novels! –  Catriona McPherson, Douglas Skelton, Russel D Mclean with  Gillian Galbraith behind the bar ( she serves a mean cocktail)