A novel of history and secrets, in a Nazi labour camp.

Book set in Germany – The Escape, Clare Harvey – Clare Harvey is an author not afraid of hard work and research. She’s taken on a difficult subject in this book – a Nazi labour camp and the Holocaust and written a dual time line story of hope and resilience.

1945 – Detta is working as a translator in the camp for French people.  Then she receives an urgent message to contact the local priest. He is harbouring a group of escaped British prisoners of war in the manse and needs her help.

1989 – Miranda is a 19-year old photography student who gets the chance to travel to Berlin. Once there, she has many challenges to overcome and yet is desperate to find out about her family’s past.. 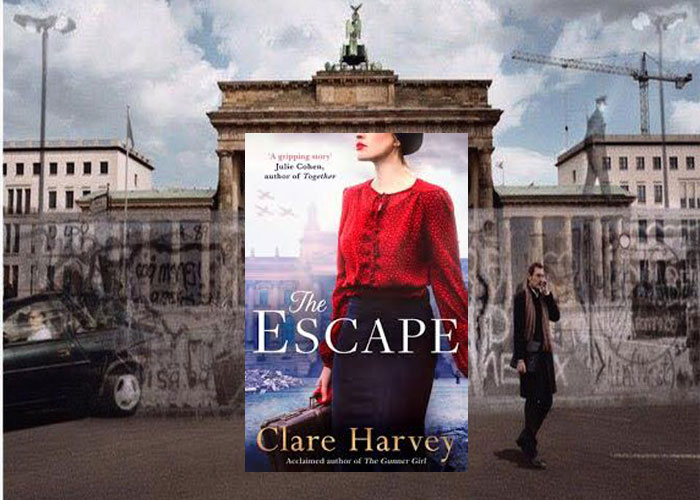 Setting: Berlin during the war and at the fall of the wall…

Whilst centered in and around Berlin during the darkest and most dangerous periods in history, this book manages to be uplifting and fascinating all at once. Clare Harvey is an author who blends research into her work seamlessly so you learn about and experience a time without it feeling like a school lesson in any way.

We first meet Detta who lives in a small village in Germany. The war is coming to an end and the Russians are on their way to liberate the people. This is a very dangerous time however as the Russians are rumoured to be causing problems of their own. Tales of mistreatment abound. The battle for survival is far from over. Detta works as a translator and this gives her an unique insight into the workings of a labour camp, the people’s suffering and the horror of such a place. Interesting to read about all of this from her viewpoint. Heartbreaking at times and the sense of dread and uncertainty are clearly evoked. Detta has one major dilemma to think about – helping a prisoner of war could end in tragedy for both of them.

People do very different things in war-time. That’s a major theme of this novel. What would you do? It begs the question of how our moral compass is affected during periods of extreme stress. War and peacetime are two very different worlds. Clare handles them both with care and attention to human detail.

The themes are taken even further with Miranda’s story. Now, the war is over, but the uncertainty is not. She is there to document the fall of the Berlin wall. Many personal issues force her to escape that role, and concentrate on exploring her family’s past. Of course, the two narratives combine but it’s the threads of history and secrets tying them together that is a real treat to unravel.

The detail in this story are marvellous – a train journey which opens the book reveals so much in a few pages about the war than an entire history book. Fear amongst people trying to make their way around the city. What happens if you miss this train? Where is this train taking them in terms of destiny?

Thought-provoking as well as a gripping story.