The Story Keeper takes us to Skye…Anna Mazzola

If you love atmospheric novels and excellent writing, then Anna Mazzola is a writer to watch. The  Storykeeper is a novel full of gothic charm and eerie nuances and Anna’s here today to bring the essence of her book to life – with pictures and words, and ghostly figures (probably) 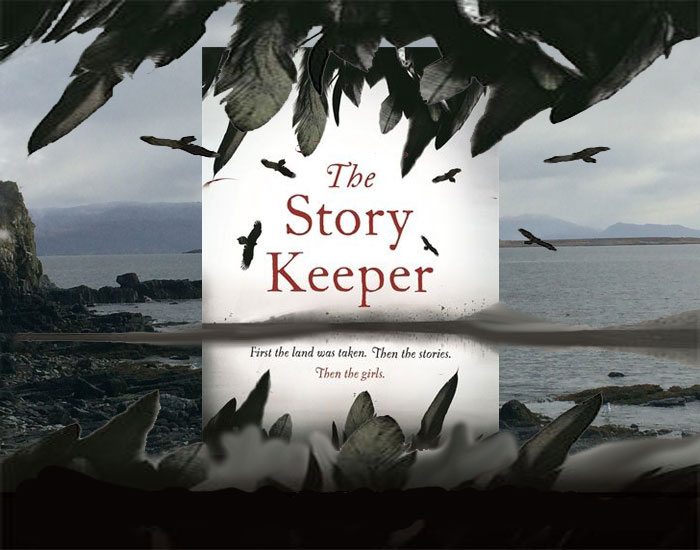 How did you find the story and want to write about it?

I knew I wanted to create a dark fairy tale, so I set off reading about strange fairy tales and folklore. I came across the West Ham Vanishings of the 1880s, in which a number of young girls disappeared from the slums of East London. One of them, Eliza Carter, returned briefly before her final disappearance to tell her friends that the fairies had kidnapped her and forbidden her to return home. Eliza’s dress was found, all the buttons removed, but she was never seen again.

I knew I had to write about that, but rather base the novel on the real case, as I’d done with my first novel, I decided to transport it away from London and set it somewhere that was far more steeped in folklore in the 19th century. The Isle of Skye, with its beautiful and eerie landscape, and its history of cleared people and stolen stories, seemed like the right place. 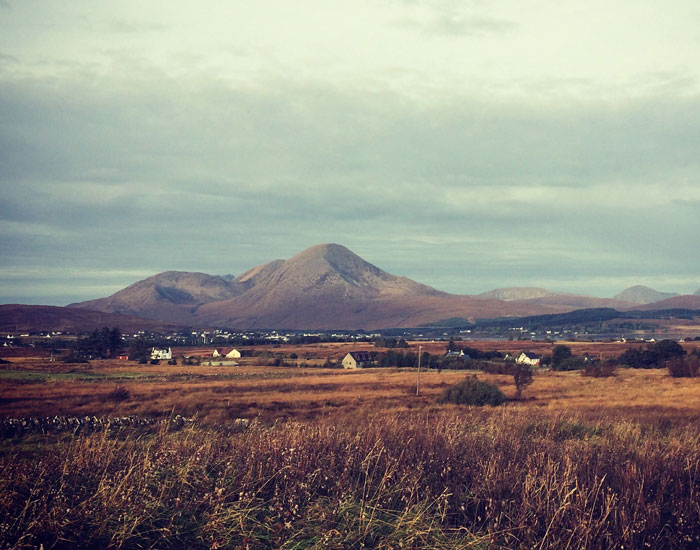 Have you been to the locations in the novel to research them?

I have; several times. What’s the fun of writing about a place if you don’t get to go on holiday there? I have a job and small children, so sadly I couldn’t escape to a bothy for months at a time, but I had several research weekends on Skye, walking the locations that feature in the book. The main setting is Broadford, the second biggest village in Skye in the 19th century, and where Beann na Caillich (‘The Hill of the Old Woman’) looks down upon a beautiful bay. It was on the edge of that bay – at Irishman’s Point – that I situated Lanerly, the mansion where the reclusive folklorist, Miss Buchanan, lives. And it’s in the bay beneath the house that Audrey finds the body of a young girl, and where she sees a cloud of strange black birds. 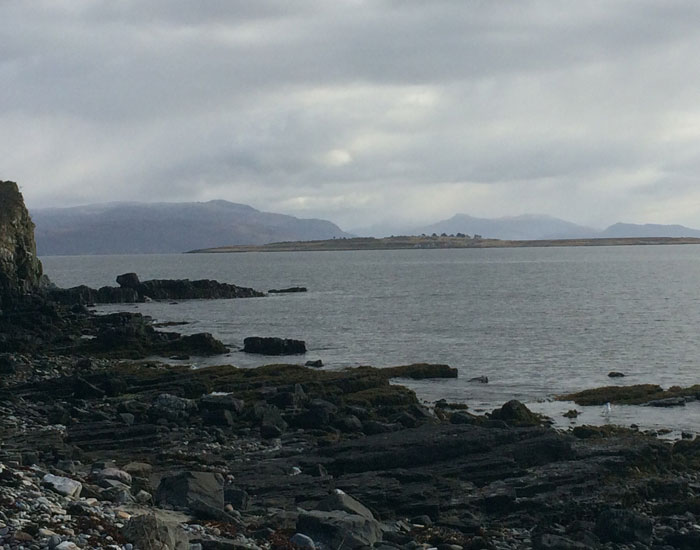 I stayed in a little cabin just by the bay, writing and researching and watching for otters and seals. I went out walking, and running, to the places where the key scenes in the novel are set: to Skulamus, Breakish and Suisnish – stunning landscapes where crofting communities once lived.

How else did you research it?

I started by reading about the history of the island, of the Clearances, of the Gaelic language and of the folklore – the fireside stories that Audrey is tasked with collecting. I then spent time at the Skye and Lochalsh Archive Centre where the wonderful staff helped me locate census records, 19th century maps, and photographs. 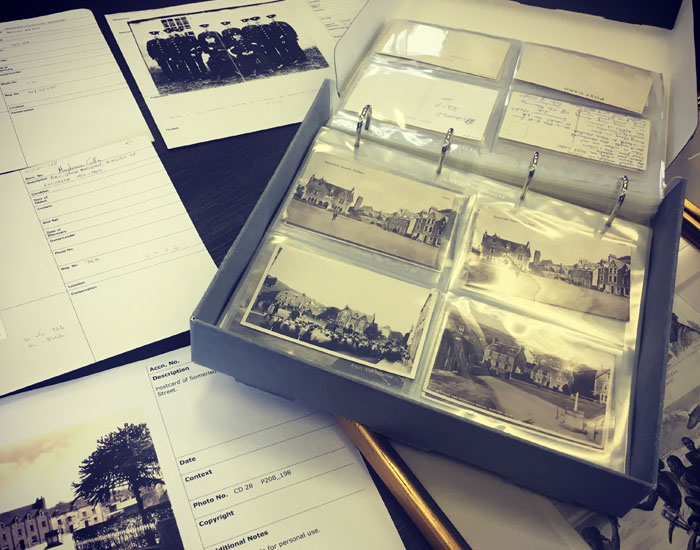 Research at the Kyle and Lochalsh Library (c) Anna Mazzola

Most importantly, they helped me find clues as to how the islanders would have spoken and what their daily lives entailed. Most of the accounts of life on Skye were written by rich Englishmen on a jolly jaunt to the Hebrides. However, I found letters sent back to Skye by those who’d been cleared: stories of children taken with fever on the boats; of sea burials and sea weddings. I read the reports of the Napier Commission: the inquiry into the conditions of crofters. It’s there that you get glimpses of how islanders spoke (‘I am a Skyeman to my backbone’, ‘a little pimple of a woman’) and learn of the effects of the Clearances.

Why did you want to tell the story of the Highland Clearances and those who lived through them?

It’s a terrible and fascinating period in history and I don’t think that many people outside Scotland are aware of it. Huge swatches of people – the poor crofters and cottars making a living from the land – were evicted to make way for sheep farming and deer forests. Many were crammed into other villages where the soil was already eroded and the people near starving. Many were sent on boats to America, Canada, Australia. There are accounts of the brutal way in which families were cleared – the children’s milk poured on the fire, houses bolted and burned, old women left lying on the ground. 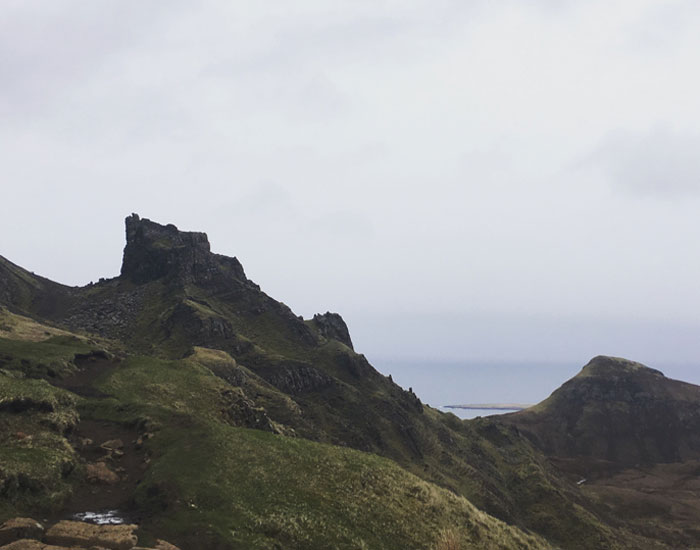 I’m very interested in the idea of justice and injustice, and, whatever the justification given for them, the Clearances were a time when an impoverished and voiceless people were trampled upon. It wasn’t just their land that was taken, either. It was their very culture and language that were being phased out. And the stories, of course. The folklorist in the Story Keeper is trying to collect the fireside tales because they’re disappearing.

Why is it important for us to understand and explore history like this through fiction?

I suppose the reason I myself read historical fiction is because I want to get a sense of how people would have lived in other eras. You don’t often get that from history books – you get dates, you get events, but you tend not to get the small things, the intimate details of how people would have lived. You rarely glimpse the details of those whose lives weren’t recorded – women, servants, minorities, the poor. What’s left in the historical record tends to the rich and powerful.

I’m interested in exploring how the undocumented lived. I wanted to get a sense of what the crofters’ lives would have been like, how the Clearances and the stripping away of their culture affected them. I also wanted to look at what it would have been like for a smart, reasonably educated woman who dared to want something more than marriage.

Yes, that was a fun part. In the novel, Audrey is tasked with collecting the folklore and fireside stories from the local people. At first, they’re hostile towards her, but gradually they reveal their folklore of changeling children, kelpies, selkies, and the Sluagh – spirits of the restless dead, who are said to take the form of birds. All of the folklore in the novel is taken from Skye and other Scottish islands. They’re not stories of happy fairies, that’s for sure.  I read some of them to my children. They may never forgive me.

I try to imagine what it would have felt like to be where the character is, and how they would have interacted with their environment. What does the ground feel like beneath their feet? What kind of clothing are they wearing and how does that impede their movement? For me, going to a place helps hugely. It’s only really went you feel the wind stinging your face and the salt in your hair, only when you smell the sour peat-reek of an old crofter house that you can really conjure those things up for your reader.

Mind you, Stef Penney recreated the wilds of Canada for a Tenderness of Wolves without ever leaving the house, so evidently her imagination is a lot better than mine. 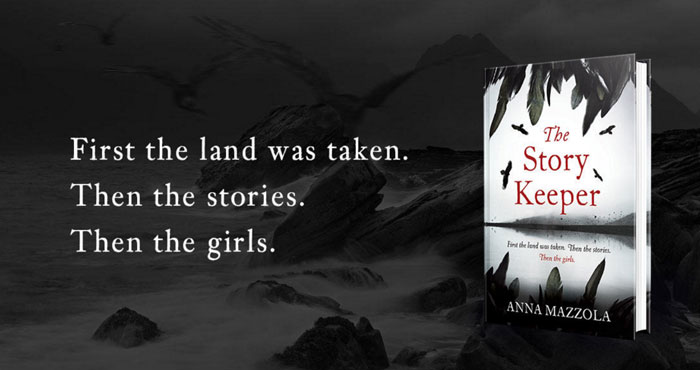 Porridge drawers. People would keep a drawer literally full of porridge and you could then take a ‘slab o’ parritch fae the drawer’ whenever you fancied. Imagine.

And with that Anna Mazzola, thank you for taking us to Skye today. Off to sort out my porridge drawer now. What a great idea!