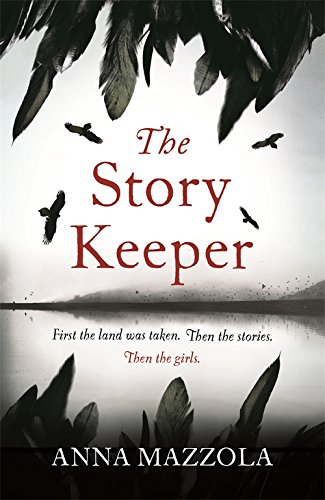 1857:First the land was taken, then the stories, then the girls…

Audrey Hart has found a position on the Isle of Skye to work as A StoryKeeper – to collect the folk and fairy tales of the people and communities around her. She is to work with an old woman who wishes to collect the story and history of the island.

The Isle of Skye has plenty of history. Stories are being formed every day – from the violence of the Highland Clearances, to the strength of local families trying to survive. But the stories which interest Audrey are those that reveal details of the fairy folk, the changelings, the spirits which take the shape of birds and take people from this place..

But when Audrey discovers the body of a young girl washed up on the beach and then finds out she’s not the first to disappear, she starts to wonder if the girls are the victims of the restless dead.

Audrey starts to look more closely at events. But an outsider finding out stories is one thing; one asking too many questions is another.

The island of stories and fables, legends and more. This book is based on a real life case from the 1880s known as the West Ham vanishings, in which a number f girls went missing from the slums of East London. Oe of them returns moths later to tell her friends that the fairies had taken her and that they would come for more. She was never seen again.

The island in The Storykeeper is awash with mystery and fables. Stories are strong here, weaving between the families and communities and creating a tapestry of history. A sense of foreboding is clear from the beginning:

“Every group of people have their own stories that they create to make sense of their world. Therefore, in folk stories, in fairy tales, we see the reflection of humankind: its strength, flaws, hopes, fears. They tell us what it takes to survive.”

Imagine coming to an island, escaping from another world to enter this one. One where the Slaugh – shape shifting creatures come to take people, children from the island. A sense of foreboding is clear from the beginning:

Shrieking split the leaden sky and Audrey looked up to see a host of birds, their wings ink-black against the grey.”

The story takes the reader around the island to various settlements such as Dunan, Broafdord and  Suisnach as Audrey gathers stories and finds things to make sense of her new world. This is a world where Ceildhs are often covers for Seanchaidhean’s, the old storytellers to tell tales of missing children, a landscape where the crofters are pained by the loss to their land, a land scared by the highland clearances. Now children are going missing, but all ill will, ill deeds are explained away by creatures of the other world.

This land is dark, foreboding and built  from legends 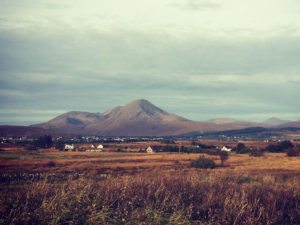 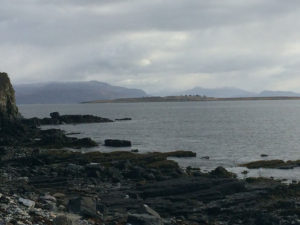 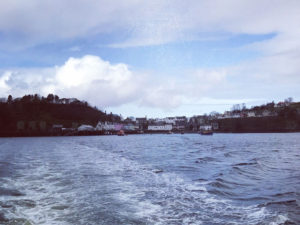 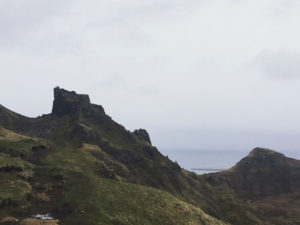 Changelings, fairy folk, communities scared by the Highland clearances, talk of dark deeds and missing girls….there was a lot going on on the Isle of Skye back in  1857 where this dark and foreboding tale is set.

From the opening page, the atmosphere is dark and foreboding, wonderfully created with rich detail from the screaming of the birds, to the dead one, to the stone of the crofters cottages and the remote, hamlets. People have lived on this land for years, it’s part of them as are their stories. So a stranger coming in to find out more is not going to be welcome. To take their stories is akin to taking their very soul.

This set shivers up my spine throughout – what a magical way of storytelling. Such vivid imagery, lyrical storytelling and a world created with strong drak characters with layers of secrets and intrigue. So many stories to find out, most based on true facts such as beware if a bird flies into your home, if you find a dead crow near your house and what you have to do if your crops fail or your children die. This is a land carved out of legend itself.

Anna Mazzola has woven a rich tapestry of folklore, legend and setting to create a tale of intrigue and dark, gothic mystery. Stunningly rich in detail and shrouded in ethereal mist. The Isle of Skye has never looked so mysterious.