There are fans of Poldark and then there are fans. The Biggest fan we’ve ever come across runs the very Poldark website Poldarked. Evie Bowman has met the cast, has a signed copy of Debbie Horsfield’s scripts by  no other than Aidan Turner himself. I’m going to distract her with a few questions and I MAY just try and borrow them… 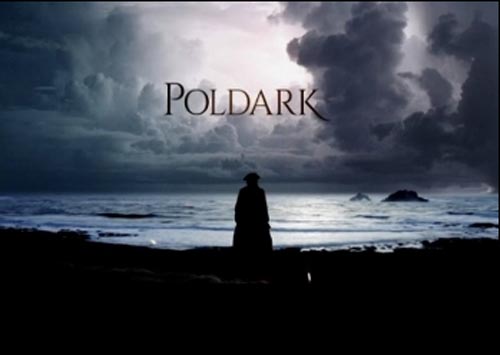 So, hello Number One Fan!

Eek! I really don’t think I deserve this accolade. Have you seen the wonderful Poldark artwork out there? People write fanfic, make podcasts, do edits of scenes and gifs. Fans celebrate their love of the show in so many ways. There are those who’ve adored Poldark since the series in the seventies and others who read the books many years ago and have been fans ever since.  For me, it’s a good story, well told. I enjoy the references to real people and events of the time, as well as the family saga.

I haven’t seen the original series. But I have met and interviewed Robin Ellis, TV’s original Ross. What a lovely man! He’s softly spoken and a real gentleman. He really loves Cornwall and, of course, actually knew Winston Graham and so has that connection with the stories that is now lost. I’m delighted he appears in the modern day Poldark. It just feels right.

Have you read all the books?

Oh yes! There is no way I would want to run a site like Poldarked without having done so. I read the first two books a few years ago. Then, when I heard Poldark was returning with Aidan as Ross I started Poldarked and spent 2014 reading all twelve books. 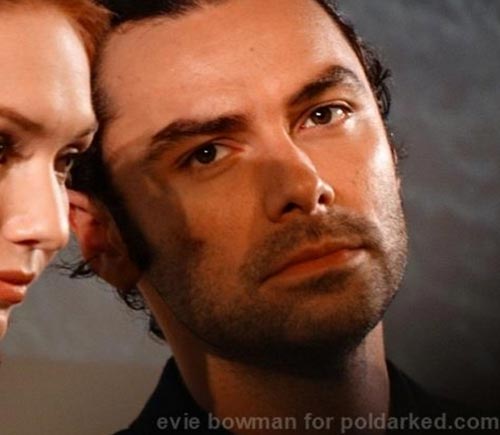 It is always a real privilege to be asked to such events. The screening was held in a private cinema in a hotel in London. Many of the cast and creatives were there as well as members of the press. After a short introduction we watched the first episode of Poldark series three followed by an extended trailer. There were then two Q&A sessions headed up by Boyd Hilton – a big plus in my book as he’s a good interviewer. 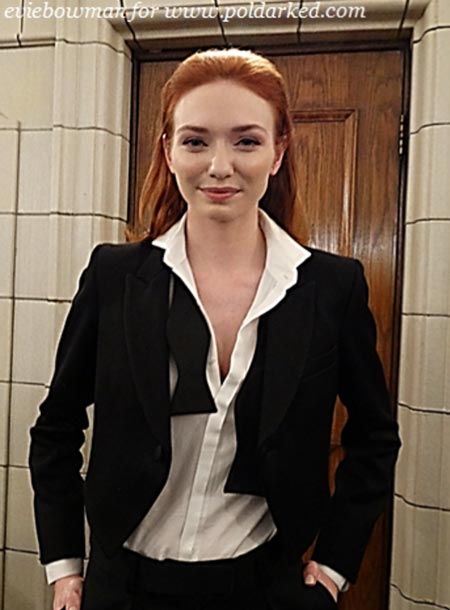 The new cast members Harry Richardson (Drake), Tom York (Sam), Ellise Chappell (Morwenna) and Sean Gilder (Tholly) along with writer Debbie Horsfield, made up the first panel, answering Boyd’s questions and taking questions from the audience. Then it was the turn of the now familiar cast members Luke Norris (Dwight), Eleanor Tomlinson (Demelza), Aidan Turner (Ross), and Jack Farthing (George) and executive producer Karen Thrussell. Both panels were entertaining with plenty of laughter from the audience. 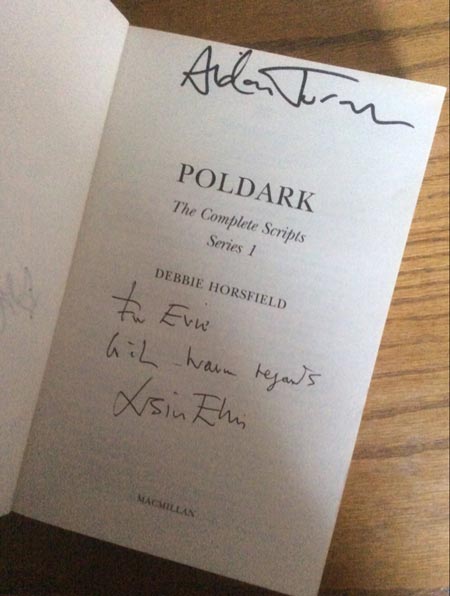 The scripts signed by the man himself (c) Evie Bowman

Afterwards there were drinks and a chance for me to have a quick word with Aidan while he drank a Tiger beer. I asked him if his haircut was for a job to which he laughed and said with a twinkle in his eye, “I can’t tell you that.” He happily posed for a pic for my Poldarked blog but, not for the first time, it came out all blurry. I can’t fathom why!!

(BookTrail: On dear – even the camera can’t even cope with Ross’ loveliness)

I managed to see Eleanor for a moment and got a photo. Then I spent a few minutes with Luke. He is always so nice. He said he never gets recognised in London but, as he’s often sporting a beard and flat cap, I guess it’s not surprising. Luke told me he’s finished filming Been So Long and that he does more singing than dancing in it. A man of many talents: he’s a good playwright too. 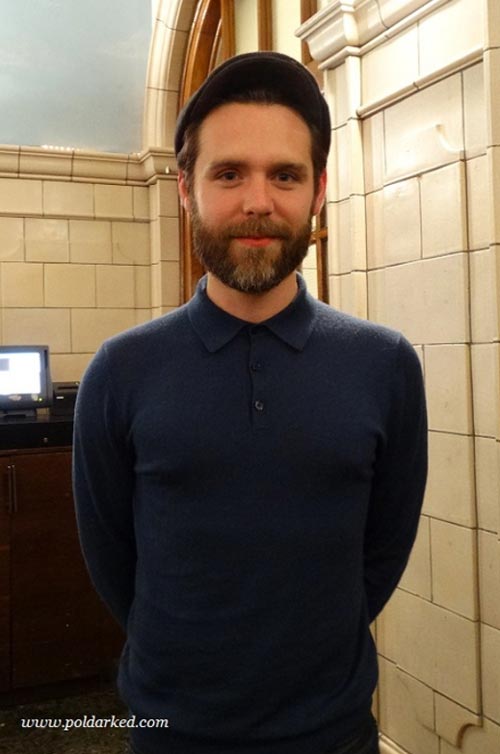 And that kind of wrapped the evening up and I headed back home thinking of the posts I’d write.

This is a hard one. There are so many good characters in the books. But I’m going to go for Caroline. She’s such a strong woman with a rebellious streak and a good friend to Demelza and Ross.

Although we don’t meet her until Bella, I think it would be most fun to play Harriet. She’s a great character. Very straightforward and confident in her own abilities. She understands what’s what in every situation. I love the way she makes George feel and the things he does either for her or because of her – I could almost feel sorry for him!  And, of course, she gets to flirt with Ross.  Wins all round!

It’s got to be the action and adventure in The Black Moon when Ross and his buddies head off to France. I’m so looking forward to Poldark series three and seeing this story play out.

With many many thanks to lovely Evie for letting BookTrail into your Poldark world. A treat indeed!