There’s something in the water this week. It’s the week Dark Water by Elizabeth Lowry hits the shops. And what better time than to visit Boston where the novel is set and be taken back to the 1800s with the author as she shows us around this amazing setting, the backdrop for her novel about intrigue at sea and more… 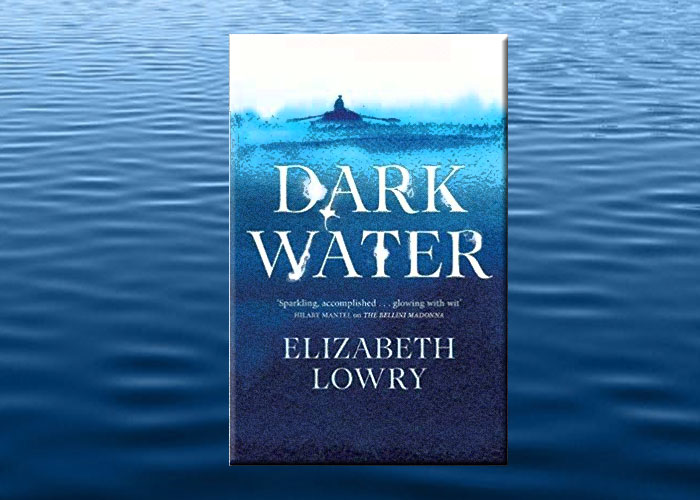 The Common is the starting point for any exploration of Boston. Until the 1830s there were still cows grazing here, as Hiram Carver, Dark Water’s narrator, remembers from his childhood; now it’s a busy meeting-point, with picnickers, sunbathers, concerts and political rallies. Behind the Common lies Beacon Hill, with its steep cobblestone streets, brick town houses and gas lanterns. Home to many of the nineteenth-century Boston Brahmin families, the city’s traditional upper class – including the fictional Carvers – the hill still breathes a sense of old-world privilege.

Henry James once called this ‘the most civilized street in America’. The Carver mansion, ‘set well back from the sidewalk, with a trim grass plot and iron fence, an entablature of white marble above the doorway and Grecian pillars set into the brick; a soaring aspect, picturesque balcony, and four stone wreaths along the cornice’, is patterned on No 85. Designed by Charles Bulfinch for the businessman and politician Harrison Gray Otis, it is privately owned – but you can wander around the first Otis house, now a museum of early-nineteenth century Boston life, at 141 Cambridge Street nearby. 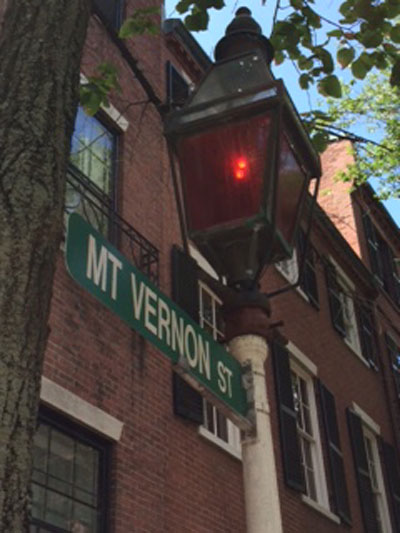 Boston’s Brahmins endowed most of the city’s hospitals, including this sprawling complex that covers the original site of Harvard Medical School. The imposing granite pavilion and sky-lit dome, housing the old operating theatre, are the very latest in nineteenth-century ‘modern’ design. This is where Carver’s father – ‘co-founder of our city’s General Hospital, Emeritus Professor of Anatomy and Surgery at Harvard College, inventor of the extendable scalpel, and all-round indefatigable civic buttress’ – works.

The Asylum for the Insane in Charlestown (founded in 1818), of which Hiram Carver becomes superintendent, is loosely based on the psychiatric hospital that later became known as McLean, and is today located in Belmont just outside Boston. The section of land over the bay from Boston where the early asylum stood became part of Somerville in 1842. The original house was erected in 1793 by the Boston merchant Joseph Barrell (Jacob Bartlett in the novel) and the wings were added in the next century. Sadly the buildings on which the asylum in Dark Water is modelled, with their ornamental gardens, no longer exist: the property was bought in 1895 by the Boston and Maine Railroad, which demolished it and razed Pleasant Hill. The place where the asylum once reigned is now occupied by North Point Park: an oasis of calm in an otherwise busy city, and the perfect place to catch your breath. It’s deeply moving to think that this tranquil spot was once the site of so much suffering.

The USS Orbis, on which Carver runs away to sea in 1832, with ‘her proudly curved sides, her three tall masts of planed pine, her delicately tapering spars, her miles of cordage that criss-crossed each other in apparent confusion but were in fact cunningly arranged in the most rigid of patterns’, is based on a classic nineteenth-century wooden frigate – and there’s no more stunning example than the Constitution, the oldest commissioned war ship afloat, kept in dry dock on the north bank of the Charles River at Charlestown Navy Yard. Take a tour of the ship led by Navy personnel and explore her decks before visiting the USS Constitution Museum, just next door, with its gripping interactive exhibit of what life on board was like in the nineteenth century. 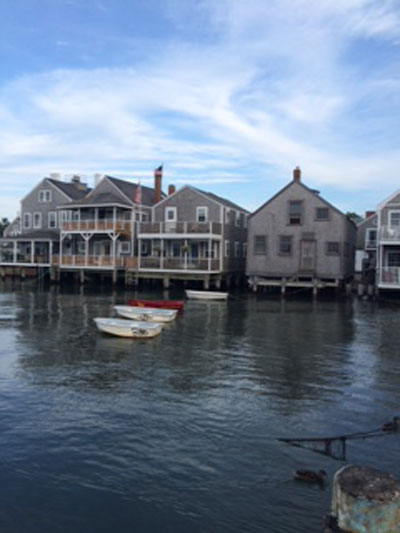 This small island lies 30 miles (48km) off the east coast of America.  Hiram Carver goes there at the invitation of Ruth Macy, the Quaker woman who is engaged to William Borden and still hopes to save him. Carver takes the steamer from New Bedford and later from Hyannis; the modern-day ferry still leaves from Cape Cod, powering into Nantucket harbour in just over two hours. Landing on Nantucket, with its grey-shingled houses, is like stepping back in time: there are few cars, and it’s easy to explore everything on foot.

Located in a former whale-oil refinery and candle factory, the museum gives an unparalleled insight into how this tiny island became the centre of the international whaling industry for a century, and into the lives of the Quaker families, like the Macys, who made their fortunes in the Pacific whaling grounds. Packed full of period memorabilia – from scrimshaw to sextants to silk Quaker bonnets – the exhibition is an impressive reminder that an entire ocean was conquered from here. 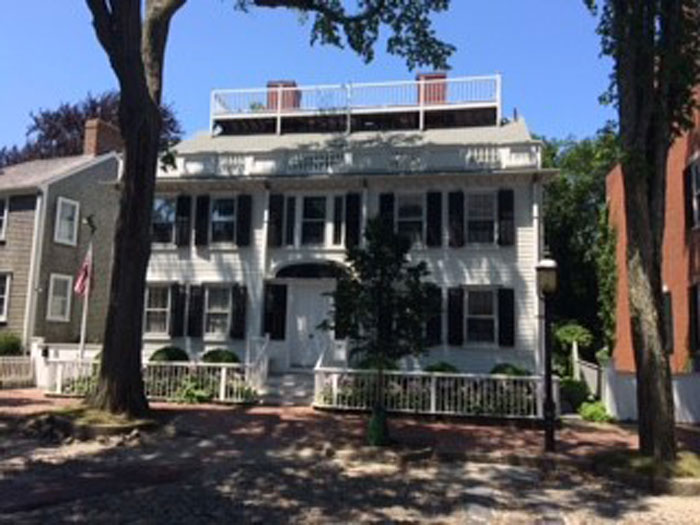 Main Street, boasting ‘large houses set in spacious plots, separated by sunny avenues and tethering posts’, has changed little since Nantucket’s heyday. Ruth Macy lives at No 99, ‘five-bayed, neat and flat, with facing boards of pure white, so smooth that they might have been painted yesterday, into which were set windows and trim of a dark green’. This elegant Federal-style home really did belong to the Macy family for more than a hundred years, and is now owned by the Nantucket Historical Association. Next door are numbers 93, 95 and 97, the trio of houses known as the Three Bricks, described by Carver as ‘blots of blood on the landscape’, built in 1838 by up-and-coming whale-oil merchant Joseph Starbuck for his three sons. Just down the road at numbers 94 and 96 are the ‘follies’ that so horrify Carver, the temple-like houses erected by the immensely wealthy candle manufacturer William Hadwen in 1846-7– the final architectural evidence of Nantucket’s glory days as the whaling capital of the world.

This hauntingly atmospheric building, with its hard wooden benches and rough candle boxes, was used for Quaker worship from 1864 and gives a sense of the moral and physical austerity of the movement. Nantucket’s Quakers were powerful financially, dominating the town for most of the eighteenth and nineteenth centuries. Despite their worldly success they were known for their devotion to simplicity and strict adherence to traditional ways, and for their disapproval of marrying out of the faith. When Ruth Macy engages herself to William Borden, she accepts that she will be placed ‘under dealings’ by the Society of Friends – that is, disowned by them. 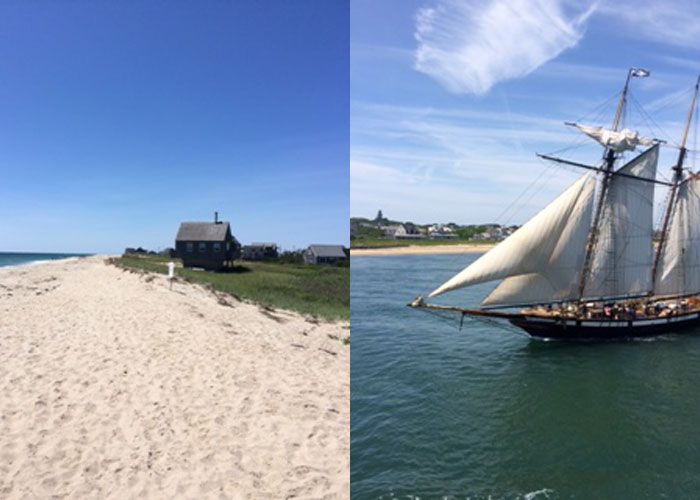 Carver endures a ‘tail-breaking’ journey by cart to this fishing hamlet seven miles to the east of Nantucket town, known by locals as Sconset, to interview one of the survivors of the Providence mutiny. Today a regular bus service will take you there in half an hour, but the village, perched above windswept sands, surrounded by moorland and cranberry bogs, retains many of its earlier features: wooden frame houses with battened roofs, narrow paths, and heart-stopping views – such as Carver’s sight of the ocean, ‘heaving and bucking with its own life’, that so paralyses him on the bluff. Stand there if you dare.

That’s quite a tour Elizabeth. Thank you so so much for taking us around the sites of your novel and explaining the fascinating history!. Very intriguing and soaked in history! Just the way we like it.