Today the booktrail is honoured to have the wonderful Lucinda Riley come over to Book trail towers for a cuppa and a chat. Writers love talking about books over a cuppa and a lovely slice or two of lemon drizzle. The booktrail owl has the table set and there is a distinct waft of lemon magic drifting from the kitchen. Better get a move on owl! Our Lucinda will be here in a moment! We’re talking Luscious locations of A Midnight Rose with Lucinda Riley 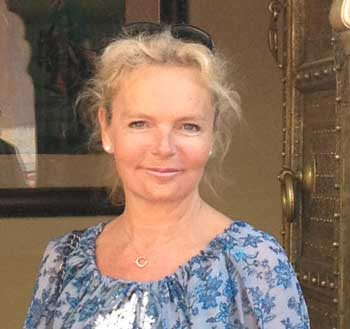 Lucinda Riley on location (c) Lucinda RilThis is the book that totally drew me into the setting and not only the surroundings – but the sights, the smells and the atmostphere as well.

Hi there! Come on in. Booktrail towers may not be as grand as that gorgeous archway you are standing beside in the photo, but do come in. Sit yourself down. Now then, would you like a piece of the famous lemon drizzle cake? Kettle’s just boiled too. Tea or coffee?

Thanks for coming over by the way. I’ve been dying to talk with you for a long time – I’ve read all your books but this one really stands out for me and so I’m so glad you choose the booktrail for a chat. Now then, as you know we are keen on settings here, so I wanted to ask you about that first of all –

You have written a number of books set in different places. Is the setting important to you and why did you want to write the story The Midnight rose set in such a contrasting landscape as India and England?

Very much so. It’s always a location that sows the first seeds for a story and India has always fascinated me. Its contrasting cultures and diverse landscapes present such a vivid, rich tapestry that it naturally provides the colourful, exotic background I so adore writing about. And seeing the beauty of its stunning temples and palaces alongside the deprivation suffered by so many of the people there has also had a lasting effect on me.

Also, I knew my family had lived there 100 years ago. My great- great-grandfather was a British army officer there before he went to fight in The Great War in 1914,  and after I finished the book I was amazed to find that my mother had discovered a photograph album which showed many of the locations and names of people I had used in the book. And  I’ve just  discovered they had settled in Devon on the edge of Dartmoor in a village called ‘Crapstone’ (the name of the place under a photograph of their house) and of course, that’s where I’ve set the fictional Astbury Hall. That really shook me. It’s definitely my most ambitious story to date and when I started, I didn’t quite know what I was letting myself in for! 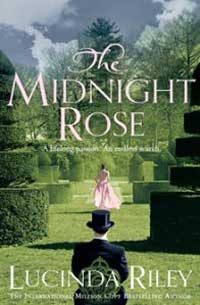 Within The Midnight Rose, the descriptions of India are sumptuous and very colourful. You have obviously stayed there yourself. Can you recommend some of the places that inspired you and which would appear on a book trail of The Midnight Rose?

I visited the Moon Palace in Jaipur where I’d imagined Anahita living. And then stayed at the amazing Rambagh Palace which is now a hotel, still owned by the royal family of Jaipur and where they are regularly seen playing polo. I also went to Mumbai, where Ari lives, Cooch Behar up in the north and New Delhi.

You set a lot of the book in the 1920s – which are your favourite writers from that time?

Coincidently, all of my favourite authors are from that time – F. Scott Fitzgerald and Edith Wharton in particular. It’s my favourite era in general.

Do you think your history as an actress helps you to live the lives of your characters in your head?

Absolutely. I have a strange way of writing as I suffered from RSI after writing my first books twenty years ago and now I dictate the whole story into my dictaphone, known affectionately as ‘Dick’. It’s only after my long suffering PA, Olivia has typed it out that I learn that I’ve performed all the characters in different voices and accents. It’s become a joke in my house, especially as I also dictate the punctuation. My children think I’m crazy. 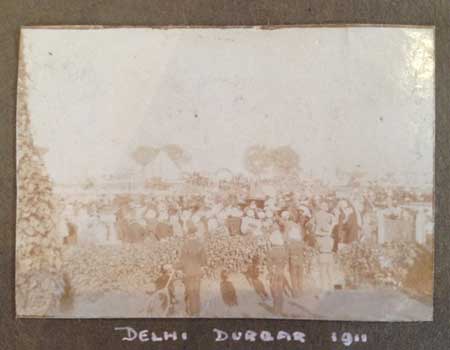 Astbury Hall is, I believe, based on Castle Howard in Yorkshire. Have you visited it and how did you do your research for this part of the novel?

Yes I have visited Castle Howard, which was designed by Vanbrugh. Another beautiful house, Seaton Delaval in Northumberland, is a Vanbrugh house and owned by a great friend of ours. He recently had to sell it to the National Trust as the upkeep and restoration was so financially demanding. So Astbury Hall is a mixture of the two.

Which countries have you lived in or visited and do you have a favourite?

I have a special soft spot for Ireland, where I was born and lived for ten years. I suppose that’s where I feel I belong. Also the South of France, where we have a house and spend our summers. Our village is on the coast and in a nature reserve so it’s incredibly untouched and beautiful, even though it’s only 15minutes from St Tropez. I love the French lifestyle, their appreciation of art and culture, and of course, food and wine.

Which literary character do you think you are you most like?

Do you think The Midnight Rose could have a soundtrack to place the reader even further in the setting? If so which two songs (one for each place) would you choose?

When I was writing ‘The Midnight Rose’ I always had John Denver’s ‘Annie’s Song’ in my head. Its lyrics are so fitting to the relationship of Anahita and Donald. Also, the music I use for the video I made for The Midnight Rose. It’s Scheherazade by Rimsky Korsakov, one of my all-time favorite pieces of music

What an amazing ending! I cried after reading it. It stayed with me for a long time afterwards and still does if I’m honest. Without giving anything away obviously, what was it like to write it?

Gulp… I will never forget writing that ending. I’d finished the story and knew I had to complete the circle and bring it back to Anahita.  Unusually, everyone in my ridiculously busy house was out. I began typing, again unusual as I normally dictate, and, after about a page, couldn’t understand why I was writing about Anahita and hospitals. I was literally just about to delete it when suddenly I knew. I wrote the last page with tears streaming down my face and sobbed on and off for the rest of the afternoon, because I just couldn’t bear the tragedy of it. I then gave it to my husband who’d read the rest of the book, and he cried too, and he never cries. I can’t ever imagine writing quite such a poignant ending again. Even my US and UK editors, who are both male, told me they were in floods of tears.

Thank you so much Lucinda for talking to the book trail about this amazing novel and how setting can play such an important role. You really do recreate some stunning sights,sounds and atmospheres in words. The scent of the Midnight Rose is a fragrance I will never forget.