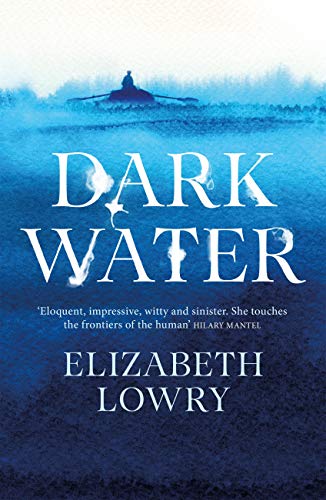 1853: Mutiny, survival, even heroism – but at what cost? Take a journey to mid nineteenth-century Massachusetts in the earliest days of mind-doctoring, and uncover disturbing secrets that lie in the dark water of the unconscious.

Aboard the USS Orbis as it embarks from Boston and surges south to round Cape Horn, Hiram Carver takes up his first position as ship’s doctor. Callow and anxious among the seasoned sailors, he struggles in this brutal floating world until he meets William Borden.

Borden. The Hero of the Providence. A legend among sailors, his presence hypnotizes Carver, even before he hears the man’s story. Years before, Borden saved several men from mutiny and led them in a dinghy across the Pacific to safety.

Every ship faces terror from the deep. What happens on the Orbis binds Carver and Borden together forever. When Carver recovers, and takes up a role at Boston’s Asylum for the Insane, he will meet Borden again – broken, starving, overwhelmed by the madness that has shadowed him ever since he sailed on the Providence.

Carver devotes himself to Borden’s cure, sure it depends on drawing out the truth about that terrible voyage. But though he raises up monsters, they will not rest. So Carver must return once more to the edge of the sea and confront the man – and the myth – that lie in dark water.

The Common is the starting point for any exploration of Boston. Until the 1830s there were still cows grazing here, as Hiram Carver, Dark Water’s narrator, remembers from his childhood; now it’s a busy meeting-point, with picnickers, sunbathers, concerts and political rallies.

Henry James once called this ‘the most civilized street in America’. The Carver mansion, ‘set well back from the sidewalk, with a trim grass plot and iron fence, an entablature of white marble above the doorway and Grecian pillars set into the brick; a soaring aspect, picturesque balcony, and four stone wreaths along the cornice’, is patterned on No 85

This is where Carver’s father – ‘co-founder of our city’s General Hospital, Emeritus Professor of Anatomy and Surgery at Harvard College, inventor of the extendable scalpel, and all-round indefatigable civic buttress’ – works.

The Asylum for the Insane in Charlestown (founded in 1818), of which Hiram Carver becomes superintendent, is loosely based on the psychiatric hospital that later became known as McLean, and is today located in Belmont just outside Boston.

The USS Orbis, on which Carver runs away to sea in 1832, is based on a classic nineteenth-century wooden frigate – and there’s no more stunning example than the Constitution, the oldest commissioned war ship afloat, kept in dry dock on the north bank of the Charles River at Charlestown Navy Yard.

Hiram Carver goes there at the invitation of Ruth Macy, the Quaker woman who is engaged to William Borden and still hopes to save him. Carver takes the steamer from New Bedford and later from Hyannis; the modern-day ferry still leaves from Cape Cod, powering into Nantucket harbour in just over two hours.

Located in a former whale-oil refinery and candle factory, the museum gives an unparalleled insight into how this tiny island became the centre of the international whaling industry for a century, and into the lives of the Quaker families, like the Macys, who made their fortunes in the Pacific whaling grounds. Packed full of period memorabilia – from scrimshaw to sextants to silk Quaker bonnets – the exhibition is an impressive reminder that an entire ocean was conquered from here.

Main Street, boasting ‘large houses set in spacious plots, separated by sunny avenues and tethering posts’, has changed little since Nantucket’s heyday. Ruth Macy lives at No 99, ‘five-bayed, neat and flat, with facing boards of pure white, so smooth that they might have been painted yesterday, into which were set windows and trim of a dark green’. This elegant Federal-style home really did belong to the Macy family for more than a hundred years, and is now owned by the Nantucket Historical Association.

This hauntingly atmospheric building, with its hard wooden benches and rough candle boxes, was used for Quaker worship from 1864 and gives a sense of the moral and physical austerity of the movement. When Ruth Macy engages herself to William Borden, she accepts that she will be placed ‘under dealings’ by the Society of Friends – that is, disowned by them.

Carver endures a ‘tail-breaking’ journey by cart to this fishing hamlet seven miles to the east of Nantucket town, known by locals as Sconset, to interview one of the survivors of the Providence mutiny. 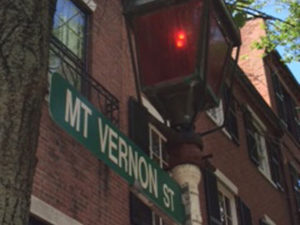 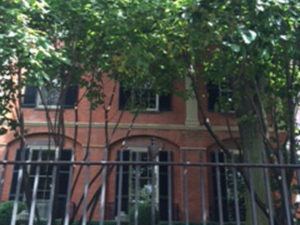 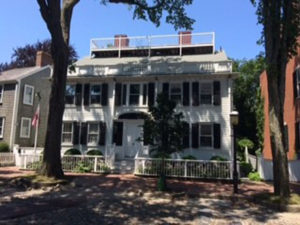 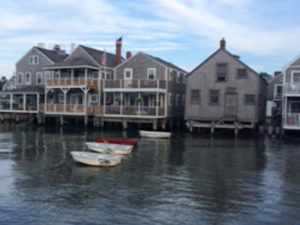