A Lone with liquorice and a great Denmark set thriller

Today we welcome Lone Theils to the Booktrail sofa as she chats about her book Fatal Crossing – Pigerne fra Englandsbåden in Danish. This debut takes place in both Denmark and the UK and is set in the modern age of globalisation

The star of the show? Nora Sand – the no-nonsense kickboxing UK correspondent for Danish newspaper Globalt starts to investigate a suitcase and onto the trail of two Danish girls that disappeared in 1985.A chilling story inspired very much by true events…

Lone – welcome to the Booktrail and thank you for this yummy liquorice! Salted Poletter – there’s nothing like it! 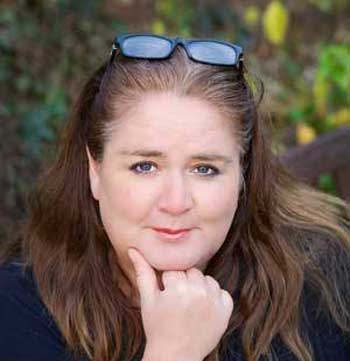 Why did you choose to mix Scandinavian noir with traditional British crime?

I just love a great crime novel and I used to gobble up Agatha Christie from when I was 12 years old, later on I started on Sjöval and Wahlö, so in a way I am a product of both traditions.

Nora Sand is quite the no-nonsense kickboxing main character? Can you tell us more about her?

She is a complex person. In many ways she is so used to taking care of herself that she finds it difficult to let anyone help her or even think that asking anyone for help is an option. In that respect she is a bit annoying, you could say. But she is also this clever and quite tough journalist who knows both how to use her brain and also can use kickboxing to get out of a sticky situation.

This is mainly inspired by my own great love of kickboxing, which I do a couple of times a week.

I think there has been a tendency to let female heroines be smart, but not so physical, and I thought: Why not? Why can´t a woman be smart AND take action and defend herself?

Women can do both, I feel, and maybe that is part of my Scandinavian heritage, the Pippi Longstocking idea that girls a strong. (Pippi can, after all, lift a horse) and she is dead clever.

Your novel is inspired by true events. Can you tell us more about this?

I read this story in Politiken online which just really stayed with me. Not least because it was illustrated by an old photo of two girls taken at the central station in Copenhagen many years ago. The story was this: In the US a serial killer had been apprehended and convicted for a number of murders, but the police suspected there were more victims. He had a pattern where he would photograph people before he killed them. After he was put on death row, the police found a storage room he had rented, and in there they unearthed literally piles of photos of unknown people. Potential victims. The background of one of these photos made it clear it had been taken in Denmark and for that reason the police in the US had contacted their Danish colleagues to try to establish who the girls were, and if they were alive at all. The piece I read was basically the Danish police appealing for information: Did anybody know these girls?

In real life they turned out to be alive. But the story stuck with me, the idea that after many years a photo would emerge who could solve a crime. I moved the setting to the ferry between Denmark and England and made the serial killer British. Deliberately I did not read more on the real story, so as to feel free to make my own twisted plot. 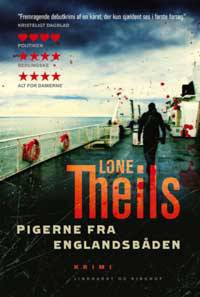 Your job is reporter for the Danish newspaper Politiken how has this helped or shaped your writing?

It has helped in more ways that I can count. First of all I has sent me to many corners of the UK, so it has given me knowledge about how people live, talk and what things really look like. I often approach setting a scene in the story as I would write a feature article. What details are important, how you capture people´s dialogue.

Secondly, just being a journalist gives you a good working relationship with the act of writing. You have had to respect thousands of deadlines during a working life, so you know that sometimes you cannot spend five hours waiting for inspiration. Sometimes you just sit down and get on with it, so the working discipline is there. Also as a journalist, I think you get less sensitive to editing. Which is a good thing, because what most people don’t know is that there is so much editing work with a book. So it helps that you don’t feel like crying when your editor says you have to cut five pages of this or that.

Finally it has of course helped me that I am a journalist myself and has a job that is similar to Nora´s. I know how it works to be a correspondent. Both the good and bad parts and I try to make that a part of the book.

What are the things you miss about living in Denmark? What English habit or word do you still find amusing?

I miss most of all my nieces and nephews, they are 4 to 8 years old and they don’t really get why I need to live so far away from them. One of my nephews actually at some point called me Auntie London instead of Auntie Lone. I miss friends, but it is pretty easy to stay in touch these days.

Oh, and every time I am in Denmark I stock up on Danish rye bread and liquorice (I don’t know why the Brits do not see the beauty of salty liquorice, such as Poletter  – What is not to like?)

I have in some respect turned so British in all these small things that you almost stop to notice. Such as apologizing when people bump into you, being overly polite when people are being rude to you. And I believe I have gotten the art of saying Really? as I arch my eyebrows just so down to a t. I believe in the healing powers of a good cuppa, and I even put vinegar on my chips (admittedly that last bit did take me a while to pick up on).

But there are things that I still get a little bit baffled by such as cricket (I respect it and love the white outfits, but I just cant seem to grasp the finer points), carpets on bathroom floors and how some of the more sordid papers are actually selling so well despite being so full of blatantly non-journalistic stories. 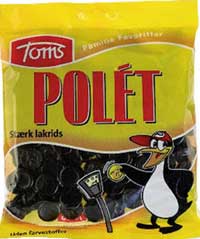 Now then – a lighter topic for a moment. What about Danish cake and drink?

One of the most Danish of cakes is, in my opinion the Brunsviger. It is a quite bready cake but with a completely decadent slather of a thick layer of brown sugar mixed with butter which melts into it in the oven. For added naughtiness some people eat with ice cold whipped cream. My mum used to make that as a birthday cake when I was a kid and would even decorate it with sweets.

For drink, a very Danish thing that I have for some reason never seen in the UK is elderberry cordial. I don’t mean the cordial you make from the flowers (which I also love), but the small black berries. It taste amazing and is also full of C-vitamins. I swear by the stuff in wintertime and I feel secretly and somewhat irrationally convinced that drinking it with hot water and sometimes a bit of fresh ginger will cure anything from flu to heart ache. I don’t know why it hasn’t caught on in the UK.

Where are you from in Denmark and why does the landscape fascinate an English audience do you think?

I was born in Holstebro, which is in the Western part of Jutland, not quite as rough as Søndervig, but pretty close. Western Jutland is a place where most of the trees point East because of the hard wind coming in from the West and where people tend to not speak too much and just get on with it. It probably would not be too far off to compare it a bit with Scotland. What I mostly loved about my hometown was that there was anamazing library. It played a great part in my life long love affair with books.

I feel I belong to many places in Denmark now, I lived in Århus, in Copenhagen and I have a Summer house now in Djursland. But part of me will always have a streak of Western Jutland in me. For better or for worse.

Please share with us a fun Danish word, phrase or saying.

I once had a British friend coming over for a visit to Denmark and she was laughing really hard when we passed a shop with a sign that proudly pronounced that here was a Boghandel.

You can see what she must have been thinking. In Danish it means book store. Also as a writer there is a great satisfaction when you can write the word Slut in your book. Because in Danish it means The End.

Not such a great phrase in English.

And on that note, we decide to finish the rather nice salty licquorice she’s brought. Lone you are more than welcome back.