#Fridayreads for your suitcase

There are some cracking books out now and next week. Oh yes, get very excited as it’s going to be a busy time for fiction fans. 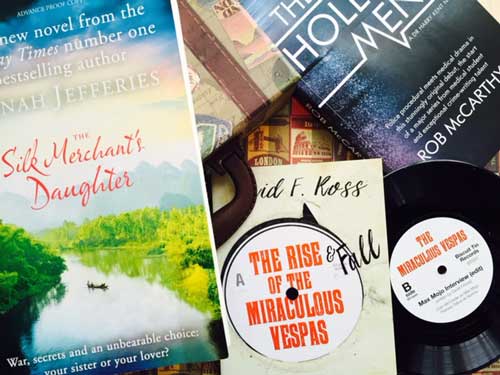 A story about a country divided in two – French Indochina – and a girl with both Vietnamese and French parents stuck between two worlds and the fear that she may fit into neither.

Stunning scenes of The heat and humidity of Hanoi, the art of the silk market and the cold, brutal onset of war, violence and a devastating family secret. This played out like a film in my mind. It was visually stunning and so poignant and sad. I felt so bad for Nicole and devastated at what she is faced with. How could she cope in such a situation? I was riveted to find out more about French Indochina and the historical setting but it was the plight of the characters, what it myst have felt like at the time that really got me going

Where to read- with a cup of chai tea, a silk ribbon as a bookmark and somewhere very comfortable you’ll want to read it all.

Dr Harry Kent is a doctor called out to dangerous situations and as a former army medic, he has seen some sights. But the siege in a chicken take away turns into something he’s never faced before and it’s a dangerous setup in more ways than one. With a mix of medical drama and a hectic pace that never lets up, this is a new, sharp and thrilling new angle to crime fiction.

Where to read – on a bed or near a doctor as you’ll be needing medical attention for a rapid heartbeat after this one!

Destination: Kilmarnock and other Scottish cities

Rise and Fall of the Miraculous Vespas. Your literary guide – David F Ross

Think Train Spotting set in a musical world. Think humour and Scottish banter, the trials and tribulations of making it, busking around the Scottish music scene and trying to make big.  Think life.

Following on from The Last Days of Disco,  with a theme tune to take you back into the eighties, with your permed hair and neon socks or maybe with a kilt you’ve fashioned from a tartan blanket and a belt…this is the decade that style may have forgot but praise the Scottish maestro who has brought the best side of it back and brought back the music too.

Where to read – preferably in a club with a beer in one hand and music banging away n the background -wearing a kilt whilst in Scotland of course.