Thriller set on the Trans-Siberian Express – Violet by SJI Holliday

Take the Violet Holliday Train across Europe and Asia

Whoah! Once in a  while, a book comes along with such a thrilling setting and series of destinations that you have to read it asap. Add a thrilling story of backpacking and friendship gone wrong and you have a novel that hurtles down the tracks and smashes all your expectations. This is a novel you really should read on a train if you can for the sheer thrills and spills you will feel with every bump of the train, the noise of the tracks and feel that sense of adventure. Even the most boring commute with feel so much better when you experience the train in THIS novel!

If you love train journeys, the claustrophobic atmosphere they can have, – but also the great sense of freedom and adventure they give – and have ever travelled alone or with someone (you think you know) abroad, then READ  ON!! 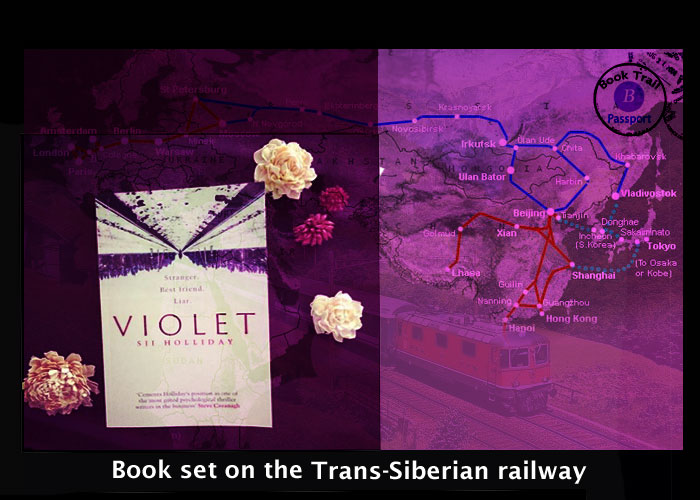 Susi Holliday has written some cracking books but I have to say that this is my favourite. It’s got a unique and exciting setting, is a story of two backpackers on a train – the Trans-Siberian railway no less- and the relationship between a girl and another she’s just met and then invites on to the train with her…

This got my attention straight away – I mean I have had so many of these meetings with fellow travellers where one of you invites another to travel with them, or to visit somewhere with them. It’s the backpacking code of honour – if you can share a car, hotel, train journey to save money and have company then you do it. Maybe not after reading this though!

The premise is enough to know before you read as any more and you will miss the intricate movement of the journey as the story turns one way and another – apt then it’s set on a train then!

Carrie and Violet end up travelling together after meeting in a Bejing hotel. Violet has just split from her boyfriend so is travelling alone. Carrie’s friend has had an accident and can no longer travel. So, travelling together sounds like fun, right? One of these women is not who she claims to be….

The scariest thing is that this is very very plausible. People who have been backpacking and travelling will see a lot of things here that they have either done or thought of doing. When reading, I was gasping one minute, shouting at one of then the next to try to warn them, and then wanting to warn the other one…this book messes with your head in the best way possible!