A Blood Song for Roy and Castells

Blood Song by Johana Gustawsson–There are some novels that you really look forward to despite knowing that they’re going to knock you down and that you’re going to need recovery time before your next read. When you read a Gustawsson novel, it’s totally worth it as you’re taken on such an emotional and often personal journey that you are as invested with the characters lives as they are.

This is the third outing for Roy and Castells, and boy are they getting stronger, more dynamic and even more fascinating. Then, enter Alienor…a new recruit to London’s Scotland Yard whose own home becomes a crime scene.. 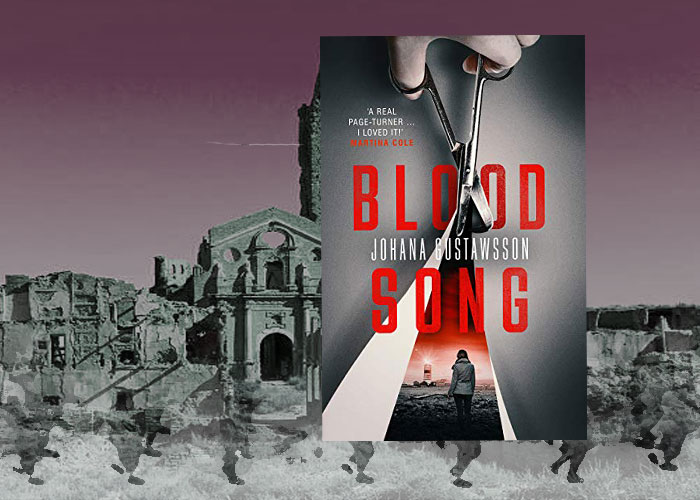 If this is not one of the most emotional books you’ll read, then I don’t know what is. There are some dark and very emotive subjects interwoven here but it’s such a gripping read, you really do come out of it with a deeper understanding of war, the consequences of war and how it has ripple effects in ways you might never have thought of.

This is a deeply affecting novel. Issues of Franco’s Spain and children’s homes during this time, babies being taken from their families, families themselves being shot…..That’s just the story set in the past. Present day sees a massacre in a home linked to one of the police officers. OF course, both stories intertwine, no check that –  knot –  themselves together so they grip you tightly and drag you into their grasp.

Blood Song is shocking and difficult to read in parts – war scenes in Franco’s Spain are never going to be postcard perfect of course  – but there are sad and tragic scenes which will stay in my mind for a long time. Remembering that this is all based on true fact and the hairs on the back of your neck stand on end.

There is so much emotion in these pages, issues such as fertility and child abductions, child abuse….and the effects of all that across time. The scenes in the Spanish prison are grim and raw. Visceral writing from not just the heart but the gut. Oh I was torn one way and then the other. How the stories mix together is a work of art if that’s the right expression. It made me think of the painting ‘Guernica’. This symbolised war; with the crowds, the scenes of war, the bull, the lightbulb – symbolic moments of war and this book, if a painting, would be just like that. So much to look at but each part stands strong on its own.After reading, stand back and experience the full picture.

What I love about this series, and this book in particular, is the mix of Swedish, French heritage and culture. The author explains about her own mixed heritage and culture and how issues in her novels come from her past. The story of Block 46 for example is the story of her own paternal grandfather and how he fought in the International Brigades. He, like many others, tried to save the Spanish Republic before being deported to the Buchenwald Nazi concentration camp.

Blood Song ramped up everything I love about Johana Gustawsson and more. The sharp writing, the unfolding of a gripping plot, dark subjects dealt with care and attention yet never shying away from the horrific truth.

Top marks to the translator too! Seamlessly done and that text shines.