The Most Beautiful Girl in Cuba by Chanel Cleeton

A novel of Cuba set in Havana and New York

When Chanel Cleeton brings out a new novel in her Cuba saga, I’m going to read it. This one, part 4, is particularly interesting. Evangelina Cisneros, a Cuban lady, was annoyed at the way her people were being treated by their Spanish oppressors. 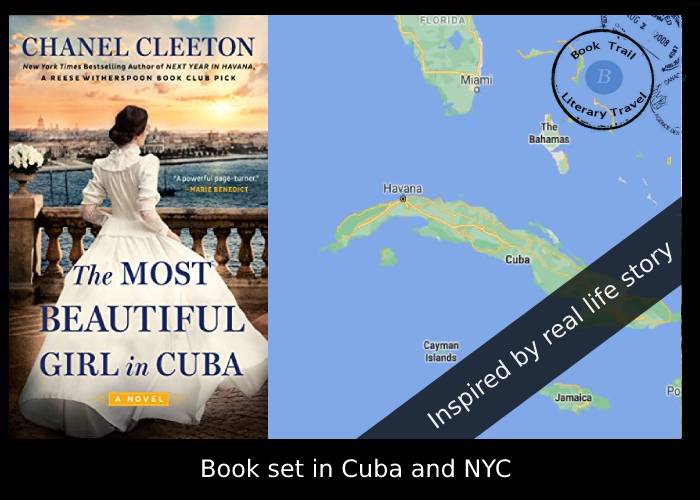 BookTrail the locations in The Most Beautiful Girl in Cuba

Transports the reader to Cuba and its history

What a fascinating read! You don’t have to have read the others in the Cuba series by this author but I’d strongly recommend it. Chanel Cleeton knows and loves history and Cuban history at that so her novels are a treat to read.!

The story starts in New York but soon travels to Cuba to discover the amazing true story of Evangelina Cisneros. She is one of those women in history that we might not hear much about, but she was an integral part of the Cuban resistance against the Spanish.

Evangelina really was described as ❛The Most Beautiful Girl in Cuba❜ . She became the face for the Cuban Revolution. Things became interesting when US newspapers picked up the story.  They fought over the best lead, the best angle. Not surprisingly, most of them exaggerated events. This then becomes a story it itself; how the newspapers of the time were trying to grab readers in new ways. This period of history,  the Gilded Age, brought a whole set of changes, and a bigger divide between rich and poor. Add to that the story of  a Cuban revolutionary and you have quite the meaty novel.

In BookTrail terms, the true story and the fictional creates a series of locations that are fascinating across time. Cuba is often seen as being stuck in a time warp and exploring Havana and the infamous Recogidas prison where Evangelina was actually imprisoned was amazing. New York of the Gilded Age and the big newspapers magnates such as Hearst is another treat. Historical setting and detail is exquisite – you are in the hands of a true storyteller.

❝I might have been born a lady, but we are made in times of war.❞

The characters, setting, story and history make for a really amazing reading experience.

BookTrail the locations in The Most Beautiful Girl in Cuba

BookTrail Boarding Pass:  The Most Beautiful Girl in Cuba